Despite being without four of their stars who were selected in the VB NSW Cup Representative side earlier in the week, Mounties still came into this match with plenty of momentum after their miraculous comeback victory over the Wests Tigers last weekend and they started today how they finished their previous game, with a flurry of four pointers.

In the 5th minute speedy centre Jeremy Hawkins got on the outside of Bulldogs halfback Lindon McGrady and then wrong-footed the Dogs fullback Jaline Graham to score his first of the day.

Then six minutes later Hawkins was in again when Graham made a meal of a Ryan Carr grubber in his own in-goal and the Kiwi speedster pounced on the bouncing ball. Five-eighth Matt Place added the extras to make it 10-0.

Midway through the first half the men from Mount Pritchard had more success with the grubber when halfback Carr kicked to the far corner and although winger Sami Sauiluma appeared to knock the ball into Bulldogs winger Tyrone Phillips before regathering and planting it down for his 15th try of the season, referee Chris James still awarded the controversial try much to the disgust of Bulldogs players and spectators. Place rubbed even more salt into the wound when he nailed the sideline conversion to extend their lead to 16-0.

Canterbury finally got on the Peter Moore Scoreboard in the 29th minute when centre Levi Dodd danced around several defenders on a 30 metre angled run back towards the posts before offloading to McGrady who dived over next to the sticks. Doggies Skipper Patrick Templeman converted to make it a ten point ball game.

However a knock on from winger Kayne Brennan in the following set from the restart killed their momentum and Mounties punished them two minutes later when Carr went himself from close range and snuck through some soft Bulldogs goal-line defence to cross left of the uprights.

Three minutes from the break the feeder club for Canberra went further in front when five-eighth Place put in a grubber kick 10 metres out and Graham, who had a horror first half with his hands, fumbled the ball again and Place dived on the Steeden to score. The lanky pivot then converted his own try to give Mounties a commanding 28-6 lead at half time.

The Bulldogs gave their fans a glimmer of hope in the 51st minute when Dodd, who had been the Doggies most dangerous in attack, darted out of dummy half to reduce the deficit and Templeman, one of the competition’s leading pointscorers, kicked  the converson  to make it 28-12.

But any chance of Canterbury mounting a comeback like they did in their round 11 clash was lost in the 65th minute when Bulldogs enigmatic playmaker McGrady threw a pass that was intercepted by Mounties right centre Hawkins and he showed blistering speed to scorch 90 metres down the Terry Lamb Hill side touchline to get his hat-trick.

Two tries in the final ten minutes blew out the final margin to embarrass the home team 42-12.

Interchange hooker Reece Goldsmith threw a lovely short ball to backrower Mitch Cahalane who crashed over from close range and Place converted to finish the match with a personal tally of 14.

And quite fittingly Hawkins, who has graduated from the Raiders Holden Cup team, got his fourth in the dying stages when he raced over in the far corner to cap off a memorable man of the match performance for the athletic 21 year old.

Both sides will be back at Belmore next Saturday with Canterbury hosting Illawarra and Mounties taking on Cronulla in a VB NSW Cup double header.

Click here to view the other results from Rd 17 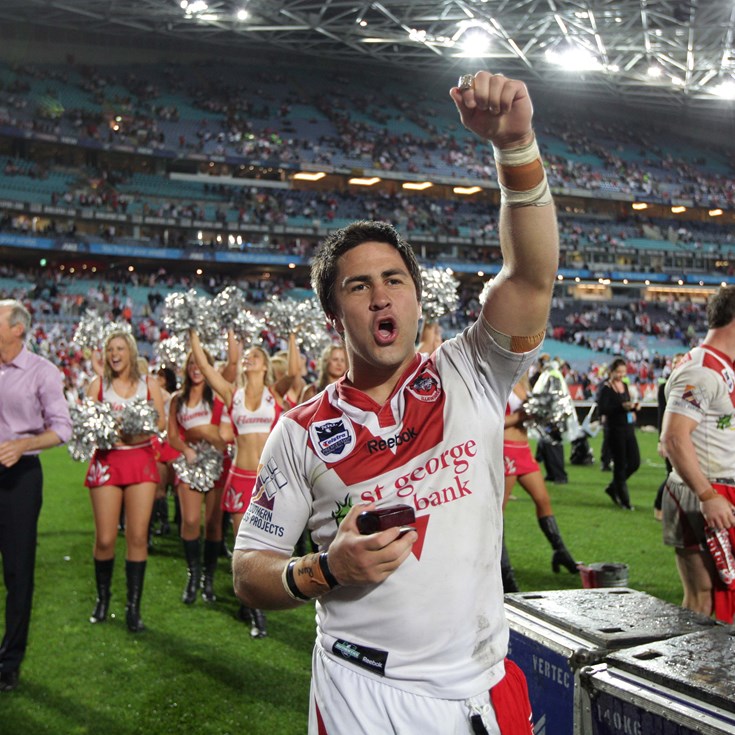