With NRL superstar Chris Sandow entering the line up, the Wentworthville Magpies are desperate to climb off from the bottom of the VB NSW Cup ladder as they go against the third-placed New Zealand Warriors.

“We go into every week like it’s a must-win match,” Magpies coach Brett Cook said. “It’s a very tight competition and we need to string a few wins to jump a couple of spots. The longer we don’t win, each week becomes more important.”

Wentworthville suffered their third-straight loss going down 16-4 against the Penrith Panthers on the weekend while the Warriors are on a roll with back-to-back victories.

“Last week came down to a lack of execution with our play,” Cook said. “We gave ourselves enough opportunities, more than what Penrith had, but we weren’t able to finish them off.

In their past three matches, the Magpies have been in each contest before falling in the dying stages. Before last week’s loss, Wenty fell 29-28 to the Wests Tigers and 25-22 against the Newcastle Knights.

“We’ve got some things we need to get right rather than worry about the opposition,” Cook said. “We need to play for the full 80 minutes because in the past three games we’ve been in a position to win but haven’t been able to. The Warriors will be tough to beat but we have to focus on ourselves first.”

The upset victory is on the cards for the Magpies with a star-studded line up featuring Chris Sandow, John Folau and Bureta Faraimo.

The Canterbury Bulldogs are hoping to rebound against the Newtown Jets after last week’s 58-18 thrashing at the hands of the competition leaders, Mounties.

“We have a few players returning so we’ll be more strengthened, especially in the forwards, and we’ve got a lot to make up for the performance last week,” Bulldogs coach Andy Patmore said. “We’re keen to make up for that.”

The Bulldogs find themselves sitting outside the top eight of the ladder after losing their past four matches. However, Patmore asserts it’s not a must-win contest against Newtown.

“We don’t use those sort of words,” Patmore said. “We’re more focused on the performance. We were disappointed of the way we went through our processes and also of our individual performance. We don’t mention losses but we’re really keen for a win and to put in a good performance at home.

“Up until last week we had played well but Mounties are a very strong side and that really shows the difference in class. We certainly didn’t play as well as we should have. We addressed playing better as a group even though we had players missing.”

Canterbury will need to step up against the speedy Jets who are motivated to consolidate a top-four position in the VB NSW Cup.

Mounties asserted themselves as the competition’s team to beat after a highly-impressive 58-18 victory against the Bulldogs following their first loss of the season against the Panthers.

“Making a statement was something we discussed,” Mounties coach Steve Antonelli said. “We just wanted to be at our best and make a statement about where we stand in the competition. It could’ve been more had we not gone off track for a 15-minute period. But it’ll be a good test this week. Wyong is pretty tough.”

The Wyong Roos will be eager to bounce back from last week’s disappointing last-minute 28-24 defeat against the Wests Tigers in addition to seeking retribution against Mounties. Wyong pushed Mounties to the limit before they fell 21-18 in the first round of this season.

Mounties will enter the difficult encounter without in-form halfback Mitch Cornish who has been rewarded for his performance with a return to the NRL with the Canberra Raiders.

“We still have Josh McCrone but I’ve got Sam Duggan who played at five eighth for Illawarra all of last year. He’s been going really well and is one of the form players this year.

“We’ve got a big forward pack too with Clay Priest back from injury so I’ve gained another forward which helps against Wyong because they like to play down the middle. It’ll be very physical.”

The game plan for Antonelli’s men is to dominate in the forwards in order for his talented backline to capitalise.

“100 percent if you can hold them in the middle of the ground then our outside backs will make the difference,” Antonelli said. “Our backs, like Jeremy Hawkins and Bill Tupou, they’re NRL first graders.

“This week will be good. Wyong is a very physical side so it will be good to see where we stand.”

The North Sydney Bears have the opportunity to turn their season around in a big way against the Penrith Panthers at North Sydney Oval.

The Bears are languishing at the bottom of the ladder with just two wins but a victory over the defending premiers could prove to be the turning point of their season.

North Sydney dropped their past two matches after they claimed a 32-4 thrashing over Wyong in Ben Gardiner’s first game as Bears coach.

The Panthers are rolling with five straight victories to establish themselves in second place on the ladder. Penrith are the only team to defeat the current leaders Mounties in scoring a 16-10 victory in round eight.

Although the odds are against North Sydney, it’s exactly the sort of victory that Ben Gardiner’s men would relish.

The Wests Tigers prevailed in thrilling fashion in their past two matches to steal victory from the jaws of defeat but don’t want to take any chances against the Newcastle Knights.

Wests Tigers edged out Wentworthville 29-28 followed by their last-minute 28-24 win over Wyong last round.

“We need to be more ruthless,” Wests Tigers coach Paul Fletcher said. “Last week we led 22-14 and took our foot off the pedal as we started making errors that we didn’t commit earlier in the game. It’s about eliminating those periods in the game where we drop away with our intensity and enthusiasm.”

“It does give us confidence but ideally I’d like to be in full control of the game and finish the game off in not giving the opposition opportunities for a chance to come back,” Fletcher said. “That’s something we have to work on.

“We’re getting ourselves in commanding positions but then we make silly errors to invite the opposition back in. The opposition have taken those opportunities and then we have to fight back again.”

Halfback Josh Drinkwater has been instrumental in the Wests Tigers midseason revival for the team to climb back into the top eight of the VB NSW Cup.

“Josh has been really good in the last two games under those situations,” Fletcher said. “He’s kept us calm and put us in a position to win the game. He doesn’t get frustrated or feel he needs to score off every play. He’s very composed in situations and keeps us within our structures.”

The Wests Tigers will need Drinkwater to be at his best again in a pivotal clash against the in-form Knights who sit in fourth place as winners of five of their past six matches.

“You like to win every game if you can but I’m not worried about positions on the ladder,” Fletcher said. “We just need to improve in those areas that we invite the opposition back in. We really need to fix that up and hopefully the result will look after itself.”

It’s set to be a gripping contest between two sides motivated to earn the two valuable competition points. 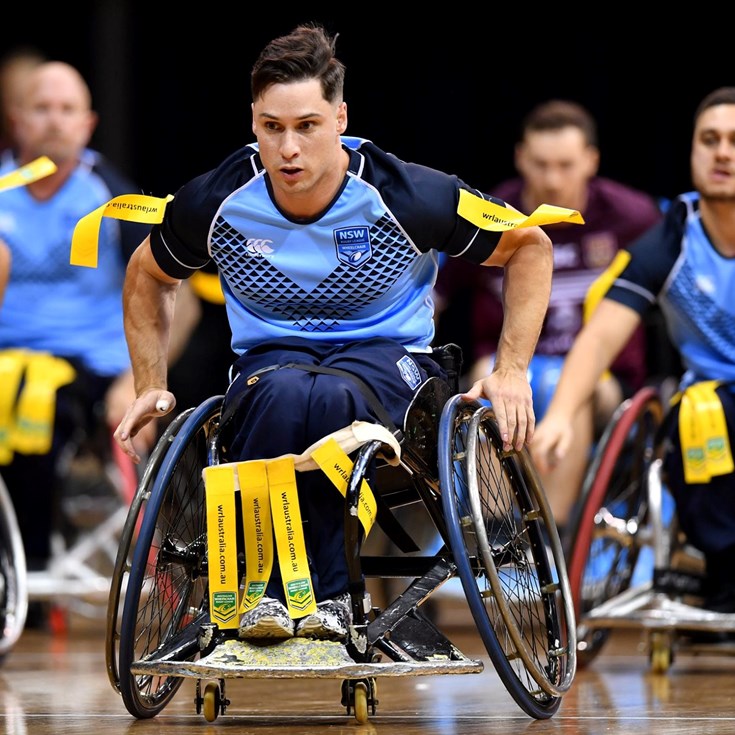