A try by second rower Isaiah Papali’i and pressure conversion from skipper Mason Lino in the 76th minute has seen the New Zealand Warriors ‘get out of jail’ for an 18-all draw with the Newcastle Knights in a scrappy NSW Intrust Super Premiership match at Cessnock Sports Ground this evening.

In a match that did not reach any great heights, the Knights were more than a match for the visitors in an error-riddled contest.

After a tight start, successive penalties to the Knights in the seventh minute saw a left side spread find centre Brendan Elliott, who then beat his man on the outside to score the game’s first try. Trent Hodkinson converted to give Newcastle a 6-nil lead.

As the error rate started to climb in the middle of the first half, the Warriors worked into field position from successive sets off a penalty and a Knights turnover.

From that field position, a short ball from hooker Nathaniel Roache found interchange forward Jazz Tevaga who crashed over near the posts.  Mason Lino converted to lock the game up at six points apiece.

The mounting error rate combined with slow play the balls and a skinny 10 metres continued to bog the match down at the back end of the first half until the Warriors got back to back penalties six minutes out form half time to again set up field position.

From there, a left side spread through the hands found stand in winger Sam Cook who dived over spectacularly to score in the corner.  Lino converted from touch to give the Warriors a 12-6 lead.

Newcastle had one last chance late in the half when winger Tom Cronan dropped a pass on his flank with a try on to leave the Warriors with their six point lead at the break.

The Knights overcame the loss of opposite winger Tom Hughes with concussion in the first set of six tackles of the second half to work their way into position from a penalty and repeat set.

At the end of the repeat set a Hodkinson switch to the left sent second rower Braden Robson over to score his first try five minutes into the second half.  Hodkinson added the extras to again level the scores at 12-all.

Both sides then again came up with errors as the match became an arm wrestle into the second half – with Warriors makeshift centre Ofahiki Ogden held up in goal and Knights centre Jacob Gagan penalised for being offside from a Will Pearsall stab kick the best chances for points to no avail.

The turning point appeared to come in the 61st minute when a massive hit on Tevaga on half way saw the Warriors interchange forward lose the ball and Hodkinson pick up the crumbs and dash 40 metres up the middle of the field.

The former State Of Origin five eighth linked up with Robson on his inside as the Warriors cover defence arrived for the backrower to score his second try near the posts.  Hodkinson converted to give the Knights an 18-12 lead.

Such was the force of the hit that Tevaga went to the head bin for concussion and did not return.

Just as the Knights were appearing to score their second big home upset win of the season as the match drew into its’ closing stages, the Warriors had one last repeat set on the back of forcing a Knights line drop out with five minutes left.

At the end of the set, a right side shift found Papali’I who carried two defenders over the line with him to score.  Lino converted the pressure conversion from wide out to level the scores for a third time at 18-all – and bring up his 100 points for the season in the ISP.

The Warriors had one last chance in the game’s last gasp with a penalty after the full time bell – but Lino failed to find touch from the penalty kick, and Newcastle centre Eliiott took the tackle to complete the unconvincing draw.

Newcastle have another home game at Cessnock next Saturday against the Newtown Jets at 3pm, while the Warriors have another away game in their next match when they take on the Blacktown Workers Sea Eagles next Sunday at 1pm at Laybutt Fields, Blacktown. 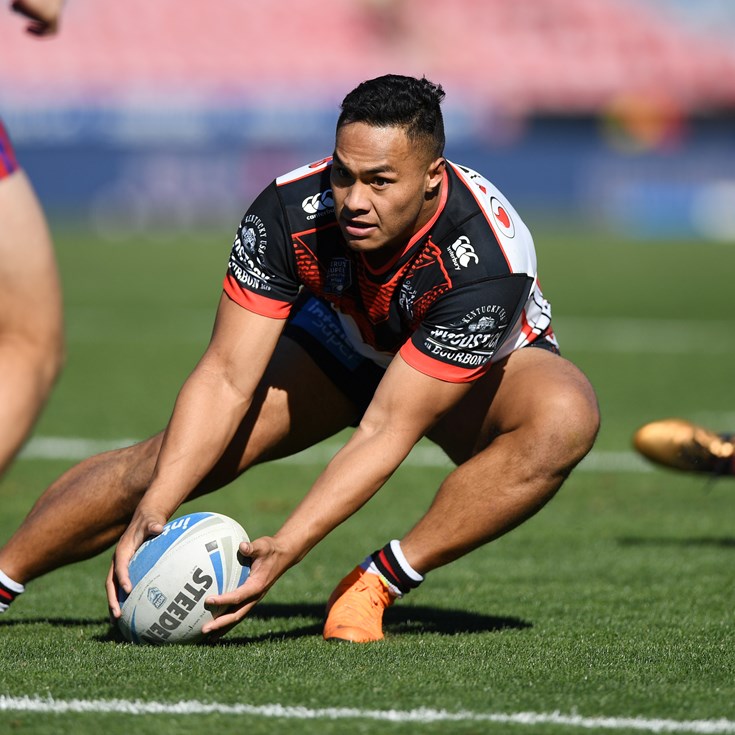