The class of Josh Cleeland guided the Canterbury Bulldogs to a last minute 22-20 thriller over the New Zealand Warriors at Belmore Sports Ground.

The crafty five-eighth scored the all important match winning try, but not before scoring another at the start of the second half, and playing a large role in one in the opening few minutes of the contest.

The Bulldogs received a penalty on the opening tackle of the match, and the following set was finished off beautifully when Craig Garvey dribbled a perfect grubber into the in-goal to force a dropout.

Some quick hands from the Bulldogs right-side opened the scoring for the home team, when Cleeland held the ball up beautifully before passing to Brenko Lee, who tipped it on for Tyrone Phillips to score with little room to work with.

The next period of the game was a tight tussle, with the Warriors putting on a mountain of pressure that the Bulldogs consistently resisted.

Eventually, after the best part of 15 minutes attempting to punch through the line, the Warriors eventually scored through a rampaging Isaiah Papalii, before Fetalaiga Pauga slotted the conversion to lock the scores up at 6-all.

A beautiful-looking double pump by Lachlan Lewis hit the chest of Reimis Smith, who then could have strolled over if the referee had not correctly pulled the play up for an obstruction.

The Warriors marched up-field following the penalty, and doubled their lead when in-form prop Toafofoa Sipley crashed over underneath the posts, a try that the Bulldogs will be highly disappointed to concede considering they had defended so well in the early stages of the game.

In the dying stages of the first half, James Bell threw out a powerful left fend to beat his opposite defender and dart away for a try in the right corner that would not be converted, meaning the half-time score was 16-6.

The Bulldogs had to be first to score after the break if they were to remain in the content, and Josh Cleeland took it upon himself to do just that when he took on the line and stepped off his right foot to score just three minutes into the half.

A nice grubber by Jazz Tevaga was re-gathered by Pauga who darted down the right sideline and eventually got the ball away to a supporting Zac Santo, who strolled over to score the Warriors’ fourth try of the afternoon.

A repeat set for the first time since the opening set of the match gave the Bulldogs a chance to hit back, and that’s exactly what they did when Lewis threw a wonderful cut-out pass for Smith, who had plenty of work to do before showing his strength and muscling his way over the line.

In a tense final few minutes of the game, the Bulldogs had a chance to lock the scores up and possibly take the lead when they were on the attack, and got within inches when Lee was brought down just before the line.

They were unable to score off that set, and had another six tackle on the attack shortly after but the desperate Warriors defence held on.

It seemed as though the Warriors had gotten out of jail, before they knocked the ball on while getting out of trouble.

With 90 second remaining, Cleeland once again stood up by taking the line on, stepping off his right foot and scoring the try to lock the scores up in front of a vocal crowd at Belmore Sports Ground.

Rhyse Martin took the all-important conversion, and raised the flags of both touch judge’s as the ball sailed between the sticks. 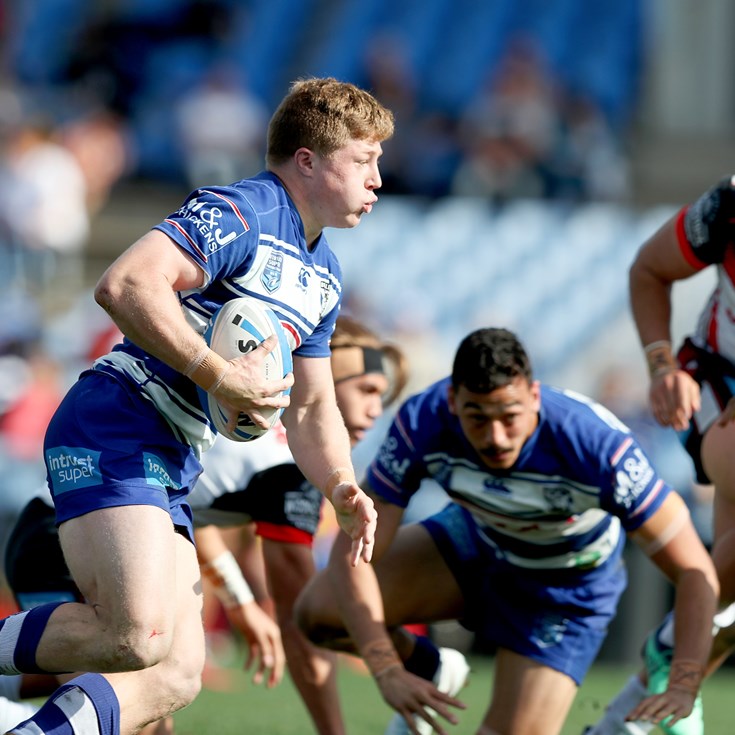 Bulldogs Bite in Round 20 Win