The Canterbury-Bankstown Bulldogs have registered a convincing victory in Round 22 of the Intrust Super Premiership NSW, defeating the Newtown Jets 54-26 as they surge towards a top four finish.

Francis Tualau and Rhyse Martin were constantly threatening for the home side, with Martin continuing his try-scoring form to cross twice and Tualau breaking the Jets' defence apart on more than one occasion. Josh Cleeland was superb yet again in his prolonged push for an NRL debut, while Reimis Smith and Richie Kennar looked dangerous on their respective edges. Newtown, meanwhile, were a rejuvenated side soon after halfback Luke Towers came onto the field early in the second half.

It was a new-look Bulldogs spine taking the field at Belmore, with the side bolstered by the inclusion of Michael Lichaa. The hooker played his first game of Intrust Super Premiership NSW of 2017 - forcing Craig Garvey to the bench and young gun Zac Woolford out of the side - but only played the first half before swapping with Garvey. Kerrod Holland returned to the centres in place of the NRL-elevated Brenko Lee, while Tom Carr lined up at fullback after a fantastic outing in Round 21. The Jets welcomed back the experienced Joseph Paulo at five-eighth.

It didn't take long for Paulo to stamp his mark on the game; in the Jets' first raid on the Bulldogs' line, the 29-year-old put a neat grubber in to result in the opening try of the afternoon. A defelction off the posts was cleaned up by prop Kurt Dillon, with Paulo easily converting for a 6-0 lead.

Reimis Smith appeared to have the perfect reply minutes later but was ruled to have lost it in the in-goal, before a mishap by Carr almost gifted the Jets a second. When Rhyse Martin hit a hole at pace minutes later, however, the home side got on the board. Martin converted his own try to even things up.

A good offload from Rod Griffin soon found Lachlan Lewis to go close to scoring and the Bulldogs earned a penalty immediately after, but were unable to capitalise with an error in the ensuing set. Both sides took turns in turning over ball in dangerous positions and it looked as though 6-all could be the half-time score, but Josh Cleeland had other ideas. The nifty five-eighth stepped off the right foot to show some nice agility to score from close range, again converted for a 12-6 scoreline.

Half-time was closing in and the home side still wasn't done with, as Martin capped off a fantastic 100-metre set by scoring his second. It came off the back of a 40-metre break from Francis Tualau, who exploited a tired Newtown defence, with Martin eventually muscling over for his second double in as many weeks. Adding the extras from out wide, Martin's Bulldogs headed into the sheds leading 18-6.

Having scored twice in the final eight minutes of the opening half, the Bulldogs showed no signs of slowing down in the second; Richie Kennar showed incredible strength to reach out and plant the ball down in the first set after the resumption. With Kerrod Holland taking over kicking duties, the conversion was successful yet again and Canterbury-Bankstown led 24-6.

The Jets desperately needed something to get back into the game and began to throw the ball around, looking likely when pressing the Bulldogs' line. A wayward pass soon fell into the hands of Asipeli Fine, however, who ran 50 metres before offloading to speedster Reimis Smith. The centre scored a length-of-the-field try with Holland converting again.

With all the momentum the blue-and-whites were suddenly doing it easily and just three minutes later they scored again. Bronson Garlick slipped through in broken play to find Carr, who scored under the posts to make it 36-6.

Points would finally come for Newtown shortly after off the back of a penalty, thanks to no.7 Luke Towers. The usual halfback, who found himself benched for Paulo's inclusion, grubbered to Edrick Lee to score the Jets' second. Towers would continue to prove his value minutes later with a break, once again resulting in an Edrick Lee try after a right-side movement.

All of a sudden the visitors were experiencing a rejuvenated run of momentum, scoring the third try in the north-eastern corner in quick succession. This time it came via former Bulldog Reubenn Rennie, with Paulo finally converting to reduce his side's deficit to 16.

The Jets threatened to close the gap further but when Lewis passed close to the line to find Fine, he put the result beyond doubt. Holland converted and it was 42-20 in the Bulldogs' favour with 12 minutes remaining.

A cruel deflection from a grubber gave Jason Schirnack a try as points flowed at Belmore, but it would be too little, too late for Greg Matterson's men. As they looked to score another, a poorly-directed bomb was batted back infield by Tyla Tamou, bouncing up nicely for Cleeland to sprint 100 metres and score a second.

The final try of the game went the favour of the Bulldogs, with Andy Saunders crashing over to bring his side's total beyond 50. With Holland converting, the Bulldogs finished 54-26 victors. 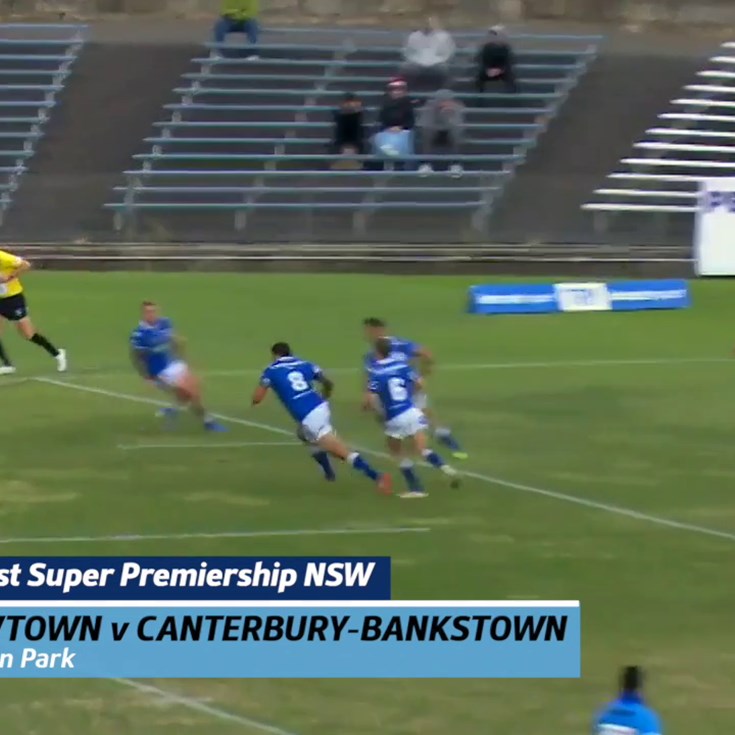 Jets Defend their way to Win Over Bulldogs