The Newcastle Knights have kept their Intrust Super Premiership NSW finals hopes alive with a 32-20 win over a fast-finishing, 12-man Mounties outfit in an entertaining match laced with late controversy at Aubrey Keech Reserve this afternoon.

Both sides took advantage of the fine, warm weather and fast-playing surface to play the match at a cracking pace for the full 80 minutes – with the controversy coming when Mounties centre Brent Naden was sensationally sent off by referee Damien Briscoe for dissent with 15 minutes left, giving away what became the match-deciding penalty in the final washup.

Newcastle got off to the best possible start when – on their first meaningful attack in the fourth minute – a left-side spread found 2017’s leading try scorer Tom Hughes unmarked on the left to score his 18th try of the season in the corner. Nick Meaney missed the touchline conversion and Newcastle led 4-0.

Mounties responded from a penalty set in the 10th minute when prop Royce Hunt ran off a short inside pass to charge over and score his first try near the posts. Isaac John’s conversion gave the Mulga a 6-4 lead.

From the penalty set, Hunt barged over from close range to score his second try next to the uprights.  John again added the extras to give Mounties a 12-4 lead.

However, the Knights hit back after managing to send the resulting kick dead.

From the goal-line dropout, a high Jack Cogger cross-field kick for Mata’utia saw the winger leap above his opposite number Alofi Mataele, claim the high ball and score the try when he hit the ground. Meaney again missed from wide out to narrow the Mounties lead to 12-8.

The Knights then got a penalty from the restart and worked play downfield from the penalty to set up a right-side shift for centre Jacob Gagan to dive over and score his first try in the corner.

Meaney made no mistake with the touchline conversion for Newcastle to regain the lead at 14-12.

The Knights were on a roll by this point and worked play downfield from the restart to unleash some second-phase play nine minutes from half-time.

The ball went through the hands on the last tackle between Pat Mata’utia, Staling and Cogger for the halfback to send a grubber kick in goal for Gagan to pick up brilliantly on the fly to score his second try.  Meaney hooked the conversion and the Knights led 18-12.

By this stage, the match was being played at a try-for-try speed and Mounties replied soon enough five minutes from half-time on the back of a long Makahesi Makatoa break.

Three tackles later, a John crossfield kick saw bench forward Jack Murchie leap nicely to claim the ball and slam it down for the try. John added the conversion to lock up the scores at 18-18 at the break.

The Knights regained the lead three minutes into the second half with a spectacular long range try that Cogger started, and then finished after taking the last pass with a determined finish and dive for the line.

Braden Robson took over as Newcastle’s goal kicker after Meaney’s earlier misses and nailed the conversion to give the Knights a 24-18 lead.

After defending grimly against concerted Mounties attack for the next 10 minutes, the Knights then extended their lead on their next attacking set when a Jaelen Feeney pass down the short side went through the hands of centre Brendan Elliot to Hughes.

The winger then put in a grubber kick that took a ricochet off the Mounties cover straight to Feeney who strolled over to score untouched.

The try came at a cost as Hughes suffered what appeared to be a right knee injury when tackled in putting the kick away – forcing the winger to leave the field and take no further part in the match.

Robson again added the extras and Newcastle had a handy 30-18 lead.

Naden was first penalised by referee Damien Briscoe for dissent whilst Mounties were in possession inside their own 20 metre area – before in quick succession being sin-binned, and then dismissed by Briscoe for further rapid-fire dissent.

Robson landed what turned out to be the critical penalty goal to give the Knights a 14-point cushion with their 32-18 lead – a cushion the Knights eventually needed.

The 12-man Mounties outfit mounted a late charge with two tries in the final three minutes to magnify Naden’s late moment of madness.

Liam Knight barged over from close range with three minutes left, before Hunt completed his first Intrust Super Premiership NSW hat-trick in the last minute.  John converted both tries to narrow the final score to 32-20 – with the Mulga unable to have one last set of six as the final siren sounded after John’s last conversion.

Newcastle will try to continue their sudden-death run of matches to a possible finals place when they play the Wentworthville Magpies in a crucial match at McDonalds Jones Stadium next Saturday at 12:40pm.

For their part, Mounties travel to Henson Park to play the out of finals contention Newtown Jets next Saturday at 3pm. 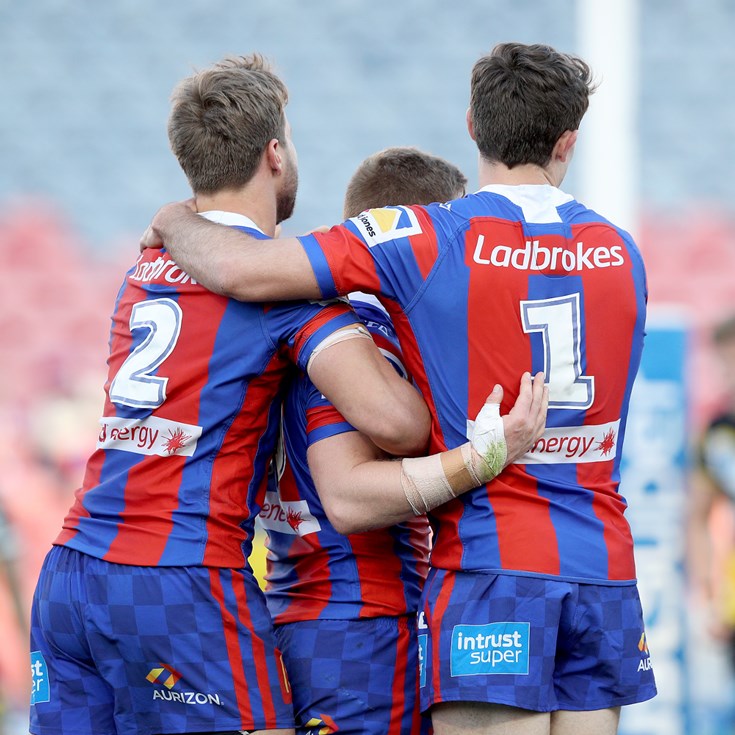