One of the stories of 2017 featured at NRL level when Ivan Cleary, appointed Wests Tigers coach in March, faced off against son Nathan’s Panthers side in Round 22. On the eve of the Intrust Super Premiership NSW Finals Series – and Father’s Day – however, it’s the Woolford household which could be faced with the same scenario.

The 2017 season saw a fork in the road for the Woolfords; father Simon, a veteran of 234 matches for the Raiders, left his post as coach of the Queanbeyan Blues to take up the role at the Knights, while son Zac graduated from the Raiders’ Holden Cup side to land an Intrust Super Premiership NSW position at the Bulldogs.

The move from the nation’s capital proved successful for both father and son at their respective clubs, but the season reached an interesting point in Round 18 when they were forced to face off for the first time.

“It wasn’t great around the house for the week!” Simon Woolford tells NSWRL.com.au. “The wife was obviously looking after Zac and it was quite tense.

“It was good to get a win, we obviously played against them earlier in the year and he didn’t play so it was weird coaching against him (in Round 18).”

The Knights enjoyed an upset victory on that occasion but with Newcastle finishing seventh and Canterbury-Bankstown fourth, there is some possibility that the sides could meet again in a preliminary or the grand final. If that were to eventuate, Woolford says, the household banter would reach new levels.

“He doesn’t live at home but the wife makes it quite clear that she’s on Zac’s side when we come up against each other,” Woolford adds. “There’s quite a bit of banter around the house so it’s going to be interesting if we come up against him in a knockout semi-final, that’s for sure.”

In Zac’s case, the progression from an outstanding 2016 – he was nominated for the Holden Cup Player of the Year award and also represented the NSW Under-20s – to an NRL career was never going to happen overnight. Zac has been stuck behind the likes of Michael Lichaa and Craig Garvey at Belmore but with the pair moving on in 2018, it will be another step in his development.

“He’s had a tough year; he’s sharing the hooking duties at the ’Dogs,” Woolford says. “Coming off the bench playing limited time is not really his game. Hopefully [with] the year against the men – and he gets to play in some semi-finals – he’ll get a lot out of that.

“I think the plan at the ’Dogs was always to have this year in (Intrust Super Premiership NSW), play against men, get another pre-season. He’s a good trainer, he’s got a good attitude so he’ll have another full pre-season and hopefully Des (Hasler) will give him his opportunity next year.”

Zac’s coach Steve Georgallis echoed the sentiments that 2018 will be a major stepping stone, knowing that patience was key with such a young, raw talent.

“Sometimes you can be too quick to get to first grade or too quick to not allow yourself to learn the game,” Georgallis says. “He’s learning about the contact and the physical part of the game, so he’s improving and that’s all he can do.

The 20-year-old, of course, could not have a better mentor as he works towards an NRL no.9 jersey; Simon Woolford made the position his own over 13 seasons at the Raiders and two more at the Dragons. Despite all the friendly rivalry when and if the two clubs meet, there is always a wealth of experience on the other end of the phone line.

“We talk a lot,” Simon Woolford says. “I still look at some of his stuff on (Rugby League video database) Analyser and he rings up and asks me things about certain parts of the game.

“I obviously try and give him a bit of dummy-half coaching when I can.”

While Zac has once again been named on the bench for the Bulldogs’ qualifying final against the Wyong Roos, the Knights will travel to UOW Jubilee Oval where they will face the North Sydney Bears. Canterbury-Bankstown’s match will be broadcast live on Fox League from 12:40pm AEST on Saturday, before Newcastle and North Sydney kick off Sunday’s triple-header from 12pm AEST – live streamed exclusively on NSWRL.com.au. 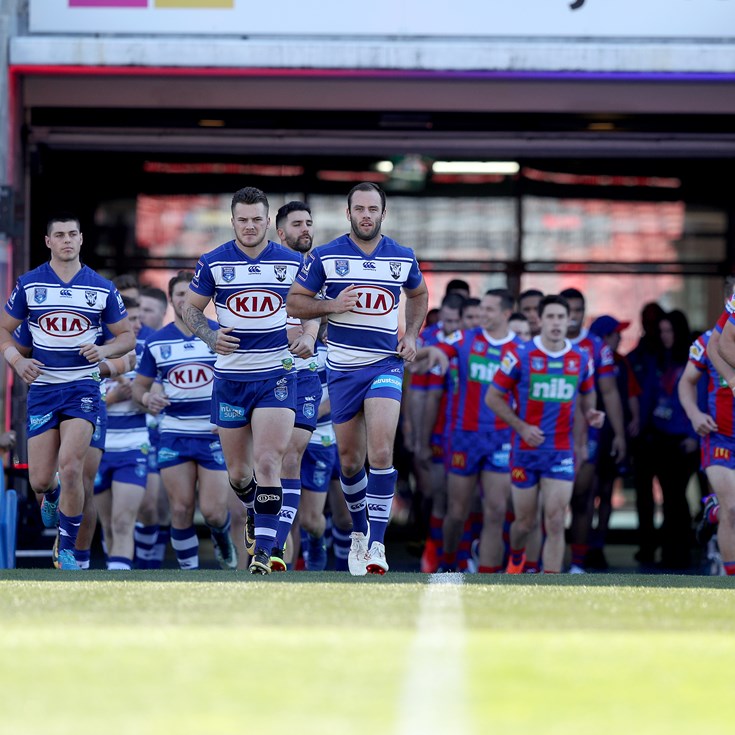 Knights Trump Bulldogs in the Hunter