The Wyong Roos have won an absolute thriller over the Canterbury Bulldogs at Allianz Stadium, 34-26 in a match that went into extra time.

Mitch Cornish was simply outstanding for the Roos, always threatening throughout the entire 90 minutes, while Chris Smith stood up when it counted for Wyong, having a major hand in the match-winning try.

The first opportunity of the game came through Wyong when a kick was put up to the wing of Johnny Tuivasa-Sheck, who athletically leapt high above the pack, but couldn’t take a grasp on the ball.

Next time Wyong were on the attack they managed to trouble the scorekeeper when Cornish beautifully double-pumped to a charging Lindsay Collins, who could not be stopped at that pace so close to the line.

Luke Sharpe, the Intrust Super Premiership NSW fullback of the year, showed why he received such an accolade when he stepped around Tom Carr and broke out of a Josh Cleeland tackle on his way to the try-line to take Wyong into double figures.

The Roos received an entire set on the attack and looked to take the game away for the Bulldogs so early in the game, but that all turned on his head when an attacking Jayden Nikorima pass was intercepted by Tyrone Phillips, who raced away for a very important try. Phillips read the pass beautifully and he timed his run to perfection before his natural speed did the rest.

Sharpe went off the field with a HIA as he was taken out illegally in the air, which clearly fired the Roos up who posted another try off the following set. As Sharpe came off, Chris Smith came on, and his first touch of the ball was re-gathering a Cornish grubber before strolling over the try-line to extend their lead to 16-4.

Wyong looked in control, and the Bulldogs had to create something out of nothing to post their next try. Brad Abbey put a cross-field bomb up that was well off the mark, but Reimis Smith made the best of the situation by catching the ball, evading two defenders and throwing a freakish pass for Phillips to cross for his second.

Tom Carr made a line-break down the right side-line which led to a penalty and therefore a full Bulldogs set on the attack, before some brilliant work by Craig Garvey out of dummy half created space for Rhyse Martin to crash over for his eighth try of the season.

The Bulldogs continued their late first-half resurgence immediately in the second half as they re-gathered the kick-off, and then some individual brilliance by Josh Cleeland – as we have seen many a time in 2017 – got them the lead when he grubbered for himself and planted the ball down under the posts.

Wyong hit back almost immediately off the back of a penalty when Nikorima attracted various defenders before offloading to Justin Toomey-White, who skipped across-field and straightened through a hole to lock the scores up at 20-all.

They re-captured their lead shortly afterwards off the back of an Eloni Vunakece run and quick play the ball, where Cornish took advantage of the fractured defensive line by putting Brock Gray over for a try.

The Bulldogs refused to die, and with 12 minutes remaining in the already-thrilling contest, Zac Woolford threw a perfect flat pass to Renouf To’omaga who was too big and too strong. The Martin goal locked the scores up at 26-all to set up an exciting final 10 minutes.

Wyong received a penalty 47 metres out with under five minutes remaining, and opted to kick for touch rather than go for the two, and forced a dropout of the ensuring set thanks to a smart grubber by the experienced Mitch Williams.

A frantic fifth tackle off the next set saw Cornish take a shot at field goal after losing over 20 metres when the ball went through so many sets of hands, and to add more to the spectacle, the ball never went dead and the Bulldogs had to work their way out of the in-goal line.

After the siren, Josh Cleeland was almost the hero when he found space and darted away for a potential long-range try, but it wasn’t to be and the teams got ready for extra time.

Just when you thought the game could have no more twists of turns, Lachlan Lewis made an error off the kick-off which gifted the Roos field position to take a shot, which they didn’t take.

Josh Cleeland put in a grubber at the other end of the field to force a drop-out, but some freakish play by Tuivasa-Sheck got him and the Roos out of danger.

In the second half of extra time, Chris Smith burst through on the left for the Roos, and passed to Paul Momirovski who raced away for a crucial try before he missed the chance to convert.

Tuivasa-Sheck scored in the 90th minute to seal the game, and book a one way ticket to the preliminary final. 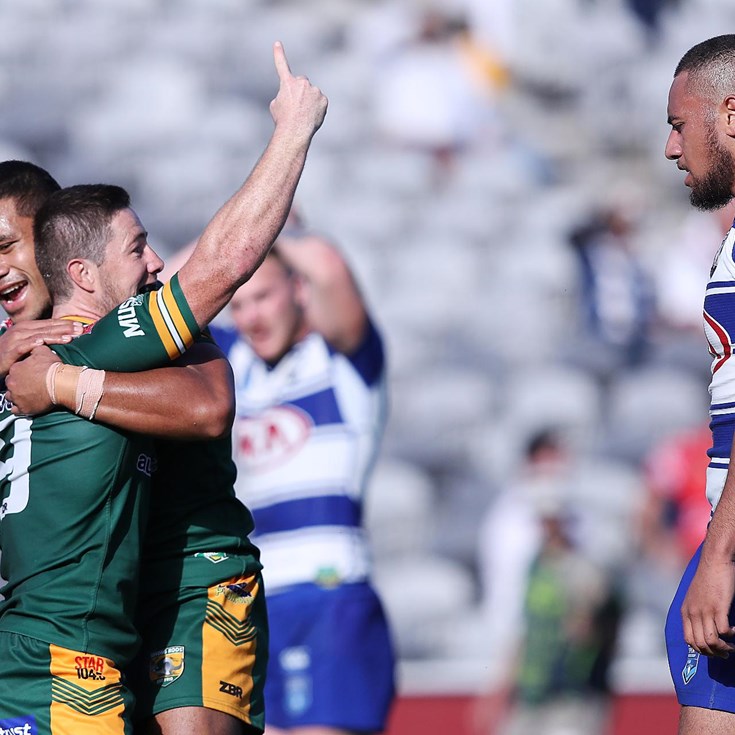