The Rugby League World Cup has arrived, with Australia to kick off the 2017 tournament against England on Friday, 27 October. While the Kangaroos are deserved favourites, changes in eligibility criteria have allowed many NRL stars to branch out to second-tier nations while remaining eligible for selection in the 2018 State of Origin series.

The new rules provide valuable experience for future NSW hopefuls, while a number of NSW Blues from yesteryear will also feature across the tournament. Outside of the 12 New South Welshmen who will line up for the Kangaroos, we’ve put together a hypothetical starting XIII consisting of NSW-eligible players.

Tedesco is one of three incumbent Blues who will play for a country other than Australia in the World Cup. While he will consider himself unlucky not to have been handed a debut in the green and gold, the 24-year-old will be a valuable addition to the Azzuri as they aim to make it out of the group stage. After playing in the centres for Italy alongside Anthony Minichiello in the 2013 tournament, he will hold significantly more responsibility at fullback the second time around.

In an age of towering Fijian outside backs, it’s easy to forget just how dominant Uate was in both the NRL and representative arenas, winning three-straight Dally M Winger of the Year Awards and representing both NSW and Australia five times each in 2011 and 2012. Uate will be a big part of the Bati’s campaign in his third World Cup.

Having been overlooked for the 2017 Origin series and not playing for Australia since 2015, Jennings returns to Tonga after last playing for them in the 2008 World Cup. The 18-time NSW veteran is still playing good Rugby League, evidenced by Parramatta’s run to the NRL Finals, but will revisit his roots in a bid to recapture his best form.

There’s no doubt that Hayne is not quite in career-best form at the moment, but this is a situation he’s been faced with before. The 2008 World Cup came at a time when the the-Parramatta star was struggling on the field, but he has since credited his Fijian experience as vital to rejuvenating his form. Titans, Blues and Kangaroos fans alike will be hoping history repeats, so he will not escape the weight of expectation which has followed him throughout his career.

Perhaps a forgotten man among NSW-eligible outside backs, Daniel Tupou was a quiet achiever on the Roosters’ flank in 2017. The 26-year-old played four games for the Blues in 2014 and 2015 and has just one cap for the Kangaroos, but returns to the country he last represented in the 2013 World Cup. Importantly, Tupou will link up with Jennings, whom he has played alongside in Australian, NSW and Roosters colours.

No, we’re not suggesting Terry Campese will add to his sole NSW appearance in the future, but 2017 did see him bring home some silverware for the Blues – the Queanbeyan Blues, of which he is captain in the Canberra Raiders Cup. Queanbeyan took out the title to end Campese’s personal 15-year premiership drought, and the 33-year-old has shown he still has it in him to perform at the highest level. The Raiders stalwart has played for both Australia and Italy on one occasion each and will obviously be a senior figure for the Azzuri.

Moses was a revelation for the Eels after joining them this year, improving his form significantly while playing halfback for the blue-and-golds. This will be the first taste of representative football for the 23-year-old, who qualifies for Lebanon through family ties; he is the nephew of Lebanese-born NSW True Blue Benny Elias and will do him proud in the upcoming tournament.

Fifita is the third incumbent Blues player who will not represent Australia – and his case of defection is undoubtedly the highest profile. Unlike Tedesco and Hayne, it was Fifita’s choice to make a debut for Tonga, ensuring he is one of the most-watched players in the World Cup. The front-row pairing of Fifita and Taumalolo is mouth-watering for any Rugby League fan and it will be interesting to see how destructive the duo can be.

The topic of the NSW hooking role dominated pre-Origin discussions early this year, with Nathan Peats eventually chosen over Farah. The former Tiger has found it difficult to display solid form with inconsistent game time at South Sydney, but in patches he has shown his class. A new playing group will be good for Farah, who is likely to spend most of his time in the halves for the Cedars with Michael Lichaa at dummy-half.

The Canberra Raiders’ human wrecking ball will continue to feature for Samoa, having played three consecutive tests for the Matt Parrish-coached side. Frequently touted as an option for the NSW Blues, Paulo needs to stand above the rest to force his way in, with all four NSW props on show in the upcoming tournament. Paulo’s performance against the aforementioned Tongan front-row on 4 November will be a big opportunity for the 23-year-old.

Heavily backed as a debutant in this year’s Origin side, Vaughan was asked to perform for an extended period in order to be considered. The usual prop – who has spent some time in the second row in seasons’ past – was one of the signings of the year, scoring eight tries and bolstering the Dragons’ pack. He will be one of the most senior forwards for the Azzuri.

The Saifiti brothers have been solid in a young side for the Knights and while a shoulder reconstruction has prevented Daniel from playing in the World Cup, brother Jacob will be a force in a formidable Fijian forward pack. He’s played for the Bati on two occasions and the 21-year-old has a big future ahead of him.

In just his second full NRL season – and first at Parramatta – Brown was extremely impressive in 2017 and consistently among the Eels’ best players on the field.  This month will see him get his first taste of international Rugby League and he is another player who will benefit greatly from the experience.

If this were a legitimate side, Hayne would likely take Campese’s place at five-eighth and Hopoate would line up in the centres – but an honourable mention must go to the Bulldogs fullback regardless. He’s never represented Australia, but Hopoate kicked off his Test career with a win for Tonga earlier this year and will look to continue that winning run, most likely wearing the no.1. 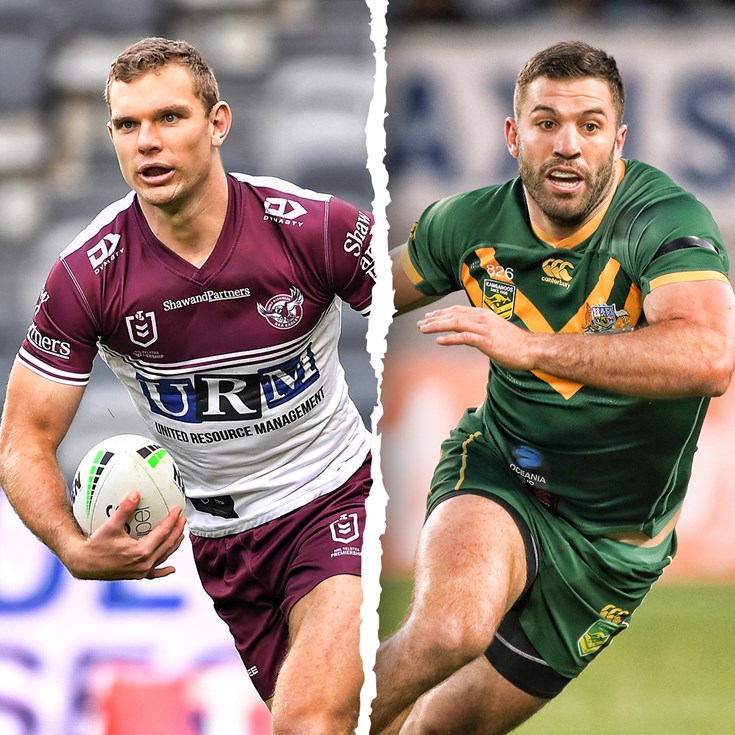