The door for Danny Levi to return to NRL has possibly been opened with boom five-eighth Connor Watson reportedly out for up to three months after injuring his shoulder that could require surgery.

Brock Lamb is expected to fill Watson’s position at No.6, meaning his spot on the bench is now free for coach Nathan Brown to either go with an extra big body or potentially pick Levi to provide a spark at dummy half at some stage of the game.

Levi played the entire season in first grade last year for the Knights and finished the year playing for New Zealand in the World Cup, meaning it would have been a shock to the system to begin 2018 playing in the Intrust Super Premiership NSW. He is, however, not kicking stones, and backs his own ability to fight his way back in the side.

“Honestly, I thought I deserved a first-grade shot, but they went another way, so I’ve got to go back to work,” Levi says to NSWRL.com.au after being the standout player in the Knights victory over Wentworthville yesterday.

“I can’t do anything about it, I can’t sook about it, I’ve just got to keep working hard and hopefully I’ll get back up in there.

“I had a big task ahead of me [today], I’ve got a point to prove and the boys really helped me out there."

Team changes for next week?

It was no secret the Knights team would drastically change from last season given the large amount of personnel they signed. It was, however, a shock to most people outside Newcastle when Levi was not selected in the 17.

Honestly, I thought I deserved a first-grade shot, but they went another way, so I’ve got to go back to work.

Stuck behind Cameron Smith at the Melbourne Storm, not many had seen what Slade Griffin could do. He’s certainly a defensive powerhouse, doing a job of tightening up the defence in the middle.

Levi credits Griffin, along with some other new recruits, of bringing a winning culture to Newcastle.

“The whole town is getting behind us, all of these new players they’re bringing a lot of quality to our training and in the games,”

“Young Kalyn Ponga and Mitchell Pearce have been good, Slade Griffin is a machine in defence so they’re really helping us along and showing us what a winning first-grade team is.”

With the injury of Watson, there is certainly room in the team for both Griffin and Levi to operate should Brown go that way, as they have completely different styles of play.

In contrast to last season, Levi now has the World Cup experience under his belt, which no doubt has improved him as a player.

“[The World Cup] was amazing, it was a dream come true for me,” Levi said

“I’ve been dreaming about it since I was a young buck so to finally get to do it was awesome.

“Hopefully I can get back up into the top squad and get to do it again sometime.”

If Nathan Brown was to call Levi back to NRL at some stage, he certainly has been proving his worth in the Intrust Super Premiership NSW.

He was simply outstanding yesterday, playing the lead role in instrumenting a comeback against the Wentworthville Magpies where he set up two late tries in crafty fashion.

The Knights had blown two leads in the opening two rounds, and Levi was relieved that he and the team were on the other side of the equation in round three.

“I thought today was a good step, we didn’t quite complete everything we wanted, but the boys still dug deep and we finally got a win, so hopefully we can get some more.

NRL team lists will be announced tomorrow at 4pm, and it will be interesting to see if Levi is named in the 21-man-squad. 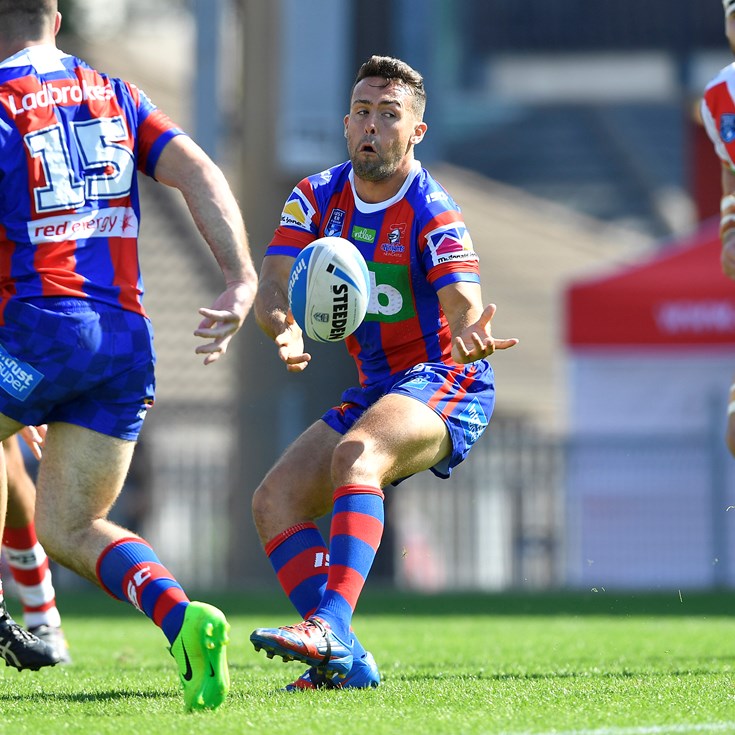