Backing up their surprise win over the Mounties last weekend, Penrith Panthers have scored a second-consecutive Intrust Super Premiership NSW upset – accounting for the Canterbury Bankstown Bulldogs 34-16 in the sides’ Round 6 clash at Panthers Stadium.

Bolstered by the late inclusions of Wayde Egan and Jed Cartwright, the 2017 premiers looked in control from the outset despite conceding the first points of the match.

Canterbury-Bankstown winger Joshua Bergamin crossed for the opening four-pointer in just the eighth minute of play, finishing off a well-worked backline shift to send the Bulldogs out by four.

Penrith reduced the early deficit to just two points when winger Brian Too hit back, though Adam Keighran couldn’t replicate Martin’s work from the tee as the score remained 6-4.

Following Too’s effort, a run of three-consecutive tries inside a 12-minute window had the Panthers well on top.

Ratu Tuisese (26th), Egan (34th) and Jarome Luai (38th) each found tries to consolidate the Panthers’ lead, with Keighran’s conversions ensuring the hosts returned to the sheds with a 22-6 lead, 40 minutes played.

Keighran extended the Panthers’ lead to three-converted tries with his penalty goal in the 45th minute, as the hosts maintained their ascendancy after the change of ends.

Bergamin found his way over to complete his double in the 54th minute of play, but the Bulldogs’ fight-back was short-lived – stopped in its tracks when Liam Martin crossed for the Panthers’ fifth try of the afternoon (67th).

Eisenhuth isolated a one-on-one situation after a left-to-right shift and crashed over for a well-deserved try, before Fa’amanu Brown darted over from dummy half for a consolation four-pointer for the Bulldogs. 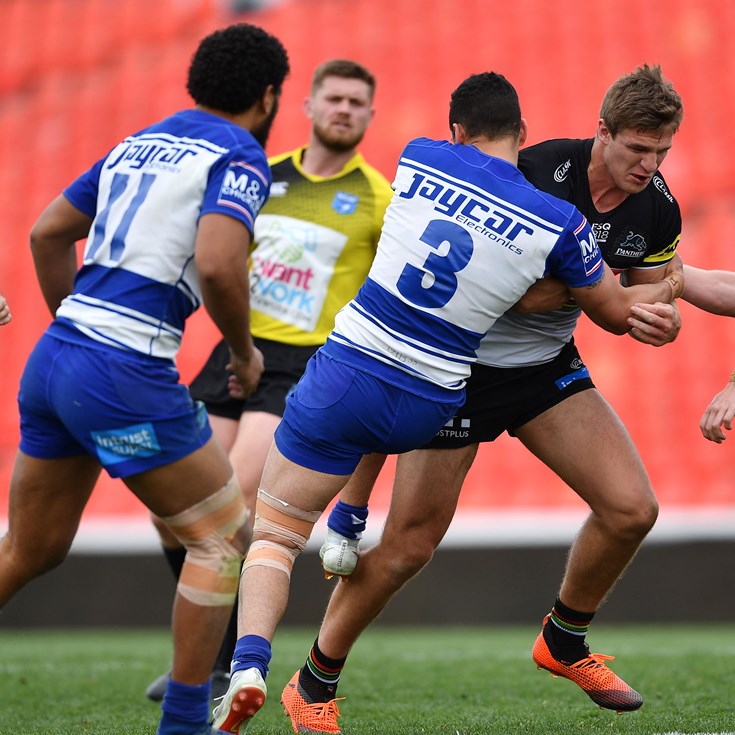 Full Circle: Panther Saunders Back Where It All Began