The Blacktown Workers Sea Eagles have recorded consecutive wins for only the second time this season, turning in a resilient performance to score a 20-16 victory over the Warriors in Round 12 of the Intrust Super Premiership NSW.

In what was at times a fiery affair, the boot of five-eighth Jackson Hastings proved the difference between the teams at HE Laybutt Field. Blacktown dominated the first-half but had to fend off a spirited Warriors comeback in the second stanza to earn the two competition points.

The match started in the worst possible fashion for the Sea Eagles with an error from the opening kick-off. Blacktown survived the early scare, however, with the Warriors conceding a penalty while in possession just tackles later.

Ill-discipline and poor handling continued from both sides in a scrappy first period of play as they each squandered some prime attacking chances.

But after yet another mistake from the Warriors in their own 'red-zone', it was the Sea Eagles who drew first blood when powerhouse prop Toafofoa Sipley barged his way over next to the posts. Hastings made no mistake with the simple conversion to give Blacktown a six-point lead.

A string of penalties then piggy-backed the Sea Eagles back into Warriors' territory after the restart. Blacktown extended the margin to eight after another Warriors indiscretion allowed Hastings to slot a penalty goal.

The Sea Eagles refused to let up on their momentum, marching straight downfield again through some strong carries. More points came for the home team via second-rower Tyler Cassel, who won the race to a perfectly weighted kick.

The Warriors enjoyed a glut of possession late in the first-half and finally cracked the Sea Eagles defence when five-eighth Chanel Harris-Tavita latched onto a grubber kick and dived across the line. The try-scorer added the extras and the Warriors remained within touch at the break.

Tempers flared when play resumed with multiple push-and-shoves ensuing. Neither team could turn their emotion into immediate points, though, as again more errors and penalties were seen.

The Sea Eagles soon applied the pressure, camping inside the Warriors end of the field. Still, the visitors held firm and returned fire by forcing a repeat set of their own.

An attempted Blacktown short drop-out went awry and thee Warriors opted to reduce the gap back to six with a Sam Cook penalty goal. Manaia Cherrington burst into the backfield after the kick-off and soon enough, the Warriors had the ascendency.

The visitors scored again when winger Johnny Tuivasa-Sheck found the line in the right-hand corner. The conversion from the sideline was unsuccessful and left the Sea Eagles clinging to a two-point lead.

Blacktown committed a cardinal sin – offside from the restart – inviting the Warriors to attack their line again.

And they looked to have taken full advantage of the golden opportunity as front-rower Albert Vete crashed over the line – only to be held up by some desperate Sea Eagles defence. It would prove to be the defining moment of the match.

Moments later, Blacktown posted its third try of the day courtesy of fullback Jade Anderson. Hastings was on target with the conversion, giving his side an eight-point buffer.

With 10 minutes left on the clock, the Warriors appeared to have set up an enthralling finish as Joseph Vuna reached out to score. But the Sea Eagles defence was again inspirational, dislodging the ball at the last second to deny Vuna.

A miracle passage of play in the dying stages of the match led to a fantastic try to Vuna, but it was all too late for the Warriors – as the Sea Eagles claimed a deserved win, backing up their Round 11 success over the North Sydney Bears. 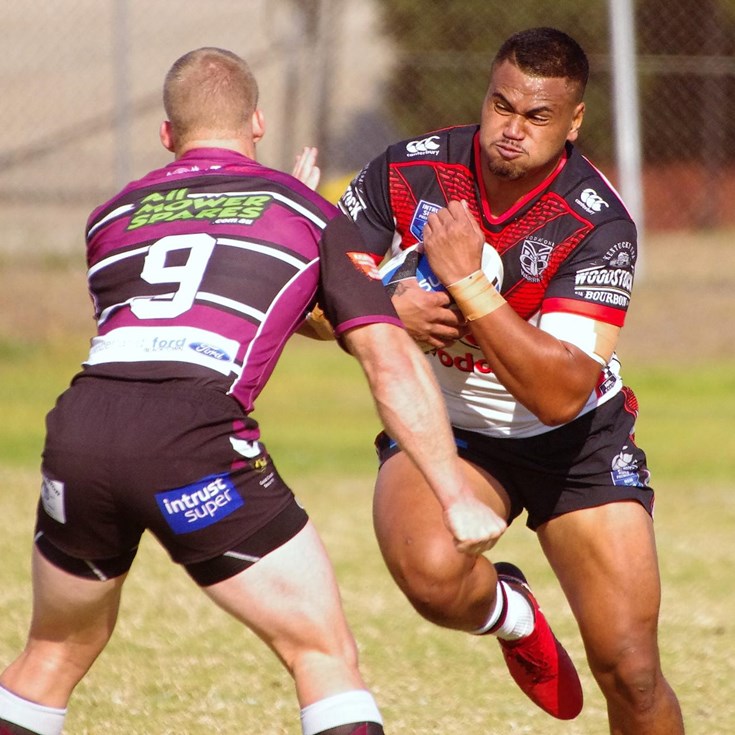