Defending premiers the Penrith Panthers moved back to the top of the Intrust Super Premiership NSW table with a convincing 34-14 win over Mounties at Panthers Stadium on Saturday evening.

Penrith started strongly after dominating early possession and prop Nick Lui-Toso crashed over off a Tyrone May pass to score the opening try. Adam Keighran converted for a 6-0 Penrith lead after six minutes.

The home side threatened to score four minutes later when fullback Caleb Aekins made a long break, before centre Sam Smith lost the ball forward when reaching out to score.

From the ensuing set, Mounties built field position to come up with a sweeping right-side movement for winger Mikaele Ravalawa, who scored the visitors’ opening try in the corner. Sitiveni Moceidreke missed the touchline conversion to leave Penrith in front 6-4.

Mounties then fumbled the restart in goal to force a goal-line dropout, but made the most of a matching Penrith turnover to work their way downfield.

In the visitors’ next attack, halfback Sam Williams broke the line and linked up with five-eighth Brad Abbey, who fed a well-timed pass for Moceidreke to score in the left corner.

Despite missing his own conversion, Moceidreke’s try put Mounties in front for the first time at 8-6.

Moceidreke was then denied a second shortly afterwards after the last pass from Smith was ruled forward by referee Damian Briscoe. Then, the defending premiers took control of the match.

A deft Tyrone May grubber kick in the 27th minute sat up in-goal for stand-in hooker Liam Coleman to win the race to the ball and score. Keighran added the extras, and Penrith had regained the lead at 12-8.

Penrith then built on further good field position late in the first half when Coleman popped a short pass for interchange prop Paea Pua, who barged over near the uprights three minutes from half-time.

Keighran converted to give Penrith a handy 18-8 lead at the break.

Penrith came out firing to start the second half when flying winger Maika Sivo finished off good lead-up work from Smith to score his first try for the season. Keighran nailed the touch line conversion for a 24-8 Penrith lead.

The home side virtually wrapped up the two competition points four minutes later when another sweeping movement through the hands saw opposite winger Ratu Tuisese score.

Desperate goal-line defence from Abbey stopped opposite number Jarome Luai from scoring midway through the second half, before the visitors mounted their best period of the second stanza for the next 10 minutes – forcing a repeat set from a goal-line drop out in the 64th minute.

Abbey capped off the dropout set when he finished off a well-worked right-side move to score. Mociedreke converted from near touch to cut the Penrith lead to 30-14.

Mounties’ frustrations got the better of them when centre Ed Murphy was sin-binned by referee Briscoe with nine minutes left for repeated infringements.

The visitors’ reduction to 12 men then opened up enough room for Penrith to put the icing on the cake in the closing stages.

Smith showed great strength to plant the ball down one handed through two defenders in the final minute, closing out the handsome 34-14 Penrith win.

Penrith put their newly-established competition lead to the test next Saturday against the Wyong Roos at Morry Breen Oval, while Mounties will look to regain winning form against the Newcastle Knights at Aubrey Keech Reserve next Saturday. 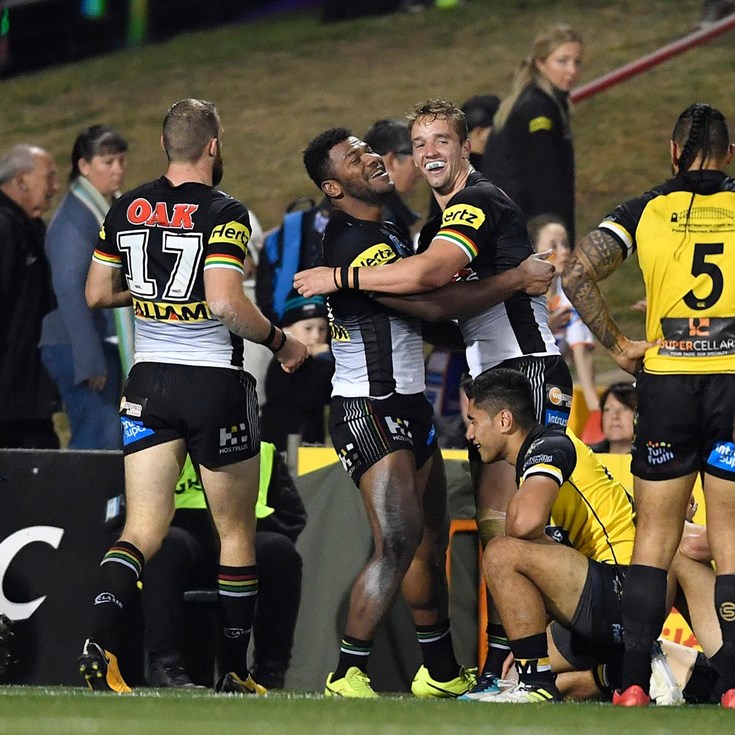