It was a career-defining performance from James Tedesco, but the Brydens Lawyers NSW fullback has lauded his side's incredible defensive performance that inspired a memorable 22-12 victory at the MCG in Origin I.

Tedesco, playing in his fifth Origin match, proved unstoppable whenever he got his hands on the ball – shattering a 28-year-old Origin record for most tackle-breaks by an individual en route to a man of the match performance.

What wasn't noted on stats sheets, though, were the try-saving efforts that kept Queensland at bay.

"I think our defence was awesome. We [only] came together in a short amount of time and everyone bought in to what 'Freddy' brought to the team and what [he] was coaching," Tedesco says, reflecting on the Origin opener.

"We just believed in each other [and had] that belief in one another. We formed that wall and we knew they couldn't get past and it's a credit to all our boys out there."

Since debuting in Game Three of the 2016 Origin series, the prized Roosters recruit  has recorded over 1000 running metres, has broken 42 tackle-breaks, assisted in four tries and has scored two four-pointers of his own.

The most experienced member of a new-look 'back five', Tedesco lead from the back – his strong efforts out of the defensive end rewarded with the match's first try, in the 22nd minute of play.

Tedesco says it was the confidence that coach Fittler has instilled in the side that saw the side live up to the pre-match hype and expectation.

"I think it's sort of just the fact that he picked players that were in form and he believed that we were playing good footy, and he backed them and backed everyone," he says.

"Freddy said they all had good characteristics and [were playing] good footy and everyone just went out there and did it.

"He told us all why he picked us in this team and we were all playing our best in our positions at the moment for our club teams, and I think we all just took that confidence into the game....[we knew] that we deserved to be there and if we go out there and back ourselves it would come off and it did." 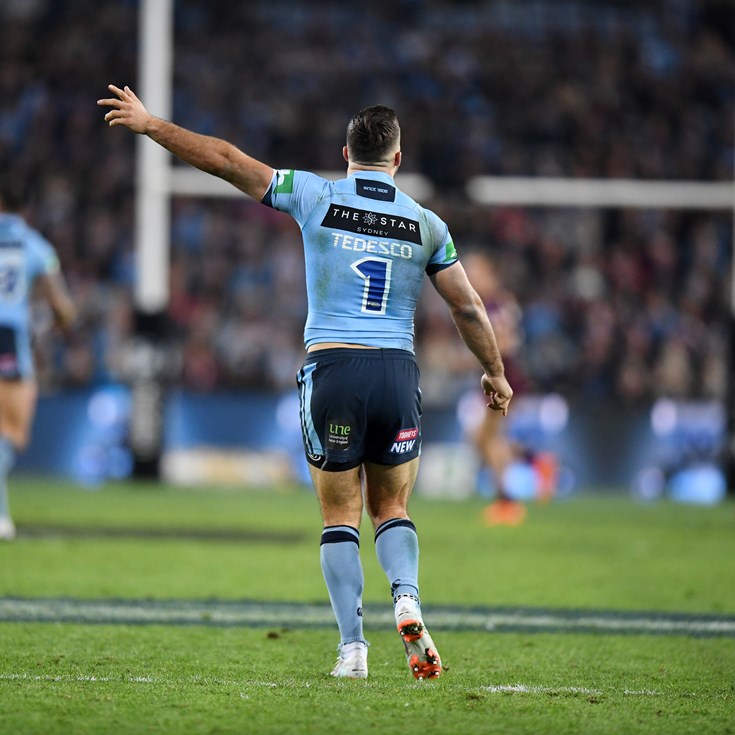 The Lesson From Minichiello That Inspired Tedesco

Tedesco On His Man Of The Match Performance

Buderus Hints at Back Line Make-Up