In the most stunning upset of the Intrust Super Premiership season, the Newcastle Knights have snapped a five-game losing streak with a 40-16 demolition of the Canterbury-Bankstown Bulldogs at McDonald Jones Stadium this afternoon.

Defying their last-placed position on the table, the young Knights outfit – led by classy half Brock Lamb and 19-year-old five eighth Tex Hoy – virtually clinched just their third win for the season with a devastating six-try first half attacking blitz to open up a 30-4 half-time lead.

It was just Newcastle’s third win for the season – and their first since beating Blacktown Workers Sea Eagles (May 13) on Mothers’ Day back in Round 10.

After gaining field position on the back of two early penalties, Knights winger Tom Hughes burrowed over with great strength from dummy half down a short left-hand blind side for his – and Newcastle’s – first try in the fifth minute.  Brock Lamb converted from touch to give Newcastle a 6-0 lead.

Newcastle then doubled their lead in the 12th minute when a nice Lamb face ball found second rower Brodie Jones who strolled over almost untouched to score.  Lamb converted for a 12-0 lead.

With the home side continuing a dominance built on a remarkable first half completion rate of 18 from 19 sets at 98%, Hoy made a scything 30 metre break up the middle of the field in the 18th minute.

Three tackles later, a left side spread saw returning centre Nathan Ross beat his man down the left to score wide out for a 16-0 lead after Lamb missed the conversion from touch.

By this stage, Newcastle was making ground through the centre of the Canterbury defence almost at will to set up further dominant field position – and were rewarded with the most spectacular try of the match in the 20th minute.

A high Lamb cross-field kick saw winger Brent Naden leap above his opponent and brilliantly pluck the ball out of the sky and crash down for the try.  Lamb hooked the conversion but Newcastle were keeping up with the clock for their 20-0 lead.

Canterbury finally got some field position of their own in the 25th minute – when five eighth Josh Cleeland sent second rower Bronson Garlick away for an easy try down the left off a nicely timed face pass.  Cleeland missed the conversion, but the visitors were at least on the board at 20-4 down.

Canterbury then turned the football over from the restart set to open the door for Newcastle to pick up their free-flowing attack.

Hoy took the chance with both hands five minutes from half-time when he burst through token Canterbury defence for a 20-metre solo burst and try to extend the home side’s lead to 26-4 with Lamb’s conversion.

Then, on the stroke of half-time, Newcastle completed arguably their best 40 minutes of the season in style when they switched play from a right side Lamb cross-kick back to the left through six pairs of hands for Hughes to score his second try in the corner.

Lamb missed the conversion from the touchline, but Newcastle held a commanding 30-4 half-time lead to leave Canterbury stunned and shell-shocked.

After a deft Hoy grubber kick in behind the static Canterbury defence saw Lamb easily win the race to score 10 minutes into the second half, Newcastle threatened to turn the match into a rout at 36-4 after Lamb converted his own try.

Canterbury then showed some greater commitment in defence to stem the bleeding of points for the next 20 lacklustre minutes, even though they could not convert their own limited chances through a series basic errors and conceding of penalties.

Newcastle also failed to convert try-scoring opportunities – Naden being tackled after an intercept and 65-metre burst and Hughes dropping the final pass down his flank with a try on – before a left-hand blind side play with 10 minutes left saw Hughes take the final pass and complete his hat-trick of tries in the corner.

Lamb hooked the conversion, but Newcastle were well and truly ‘home and hosed’ with a 42-4 lead.

Newcastle then put the cue firmly back in the rack in the closing stages – allowing Canterbury to score three late consolation tries to make the final score more respectable.

NSW Pioneers representative interchange forward scored from a Matt Frawley cross-kick with four minutes to, Cleeland scored two minutes later from a solo burst down the right, and winger Jayden Okunbor followed a Frawley grubber kick to score just inside the dead ball line as the final siren sounded.

However, the three late tries were far too little, far too late for Steve Georgallis’ men – with their loss again opening up the eighth spot to the likes of Wyong, Wentworthville and North Sydney now snapping at Canterbury’s heels on the table.

Newcastle put the confidence gained from their win today to the test against Newtown at Henson Park next Saturday afternoon, while Canterbury will have to pick up the pieces from their loss against perennial heavyweights Mounties at Belmore Sports Ground next Saturday evening. 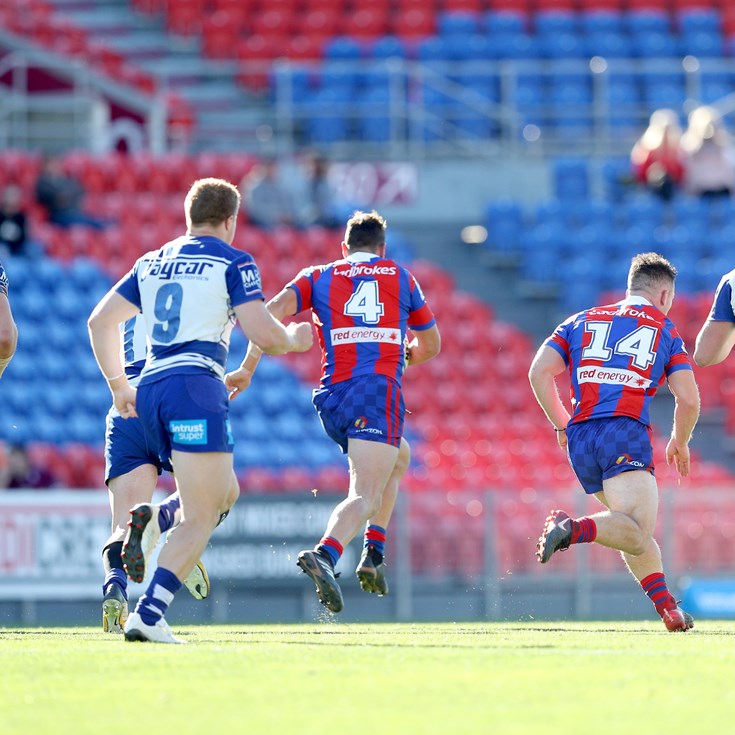