Defending Premiers St Marys Saints turned in their best performance of the season to date when they trounced the Wentworthville Magpies 52-24 in their match at Ringrose Park last Sunday.

Wentworthville started the match well enough when backrower Dayne Vette-Welsh scored the opening try of the match in the fifth minute for a 6-0 lead with Brendon Newton's conversion.

That was the only time the home side led for the rest of the match as the visitors blew them away with the most devastating 25 minutes of football seen in the Sydney Shield seen this year – starting with five eighth Jake Toby's try in the 15th minute.

Fullback Allan Fitzgibbon scored his first try in the 21st minute to give St Marys the lead, before centre Etuate Qionimacawa extended the lead with his try six minutes later.

St Marys then ruthlessly burst clear with skipper Robbie Graham's first try 10 minutes from half time and Fitzgibbon's second try three minutes later. Graham completed his double on the stroke of half time to give the visitors a remarkable 34-6 lead at the break over their shellshocked opponents.

St Marys half Isaac Thompson scored straight after half time to blow the St Marys lead out to 40-6 after he converted his own try, before Wentworthville mounted a comeback of sorts through the middle of the second half.

Prop Solomone Lasalo crashed over to give the home side a chance of a miracle at 40-24 with his try and Newton's fourth conversion from four attempts with just over 15 minutes left.

St Marys then steadied and came away in the final 10 minutes with a late double from winger John Tuliatu to consolidate their place at the top of the Shield table.

Thompson completed the 52-24 scoreline by converting both of Tuliatu's late tries – giving the half a personal tally of 20 points from eight goals out of nine attempts to go with his try.

The Moorebank Rams announced themselves as genuine contenders in the Shield Premeirship mix with a stunning 38-26 win over the East Campbelltown Eagles at Hammondville Oval last Sunday.

As has been the case all season so far, Brad Morrin's young Rams outfit came out of the blocks hard with an early attacking blitzkrieg of tries to set up their win – starting with their opening try from giant lock Jake Kamire in the fifth minute.

Winger Ky Tak Chan then extended the lead in the 10 th minute with his ninth try of the season, before NSW Under 18s star Tommy Talau got his first try in Shield for the Rams in the 14th minute for an 18-0 lead after Jake Horton landed his third successful conversion.

East Campbelltown responded with three tries of their own to come back into the game late in the first half – starting with Vince Ripepi's try in the 21st minute.

Talau completed his double in the opening set of six tackles of the second half to extend that lead out to regain the lead for Moorebank, before interchange player Christian Tabbarey consolidated the home side's lead to 28-18 with his try six minutes later.

Horton socred a superb try 15 minutes into the second half to give Moorebank a 34-18 buffer after he converted his own try – a buffer the home side needed as East Campbelltown came back a second time in the match over the next 15 minutes.

Evergreen winger Craig Moustakas scored in the corner midway through the second half, before leading try scorer Daniel Muir posted his 12th try for the year to pull the Eagles back to within striking distance.

However, Moorebank steadied and winger Jonty Timoti made sure of the home side's win with his try wide out with eight minutes to play closing out the 38-26 scoreline to make a statement to the rest of the Shield competition.

The Asquith Magpies moved past Moorebank back into the top four on percentages with a 26-4 win over Belrose Eagles in a bruising match at Storey Park last Sunday.

In a tight and tough first half, Belrose came out fired up against their nearest rivals with more commitment than they showed in previous weeks, and were rewarded for their improved efforts when five eighth Alex Zarounas finished off a right side movement in the sixth minute for a 4-0 lead.

As the arm wrestle wore in the first half, the match became attritional as Belrose interchange centre Nick Bilsborough lasted two minutes with a calf injury, whilst Belrose's Marcel Ferris and Damien Lawler along with Asquith skipper Vinny Ngaro all went to the head bin for various spells in the first stanza.

The FIFA World Cup came to Storey Park nine minutes from half time when, against the run of play, a Belrose dropped ball deep on attack was toed ahead twice by Asquith five eighth Ngangarra Barker.

Barker 'soccered' the ball ahead a second time before winger Kane Allan loomed in support and dribbled the ball ahead twice more off the foot up field for good measure.

After 70 metres and four dribble kicks along the ground from the original Belrose dropped ball, Allan finally picked the ball up and dashed the last 10 metres to score the most spectacular of tries. Kyle Tukupua converted to give Asquith a 6-4 lead at the break.

The torrid defence continued into the second half as Belrose bravely fought to stay in the game, with Allan along with team mates Mike Filimona and half Shae Jarvis joining the growing ranks in the head bin in the first 10 minutes of the second half.

12 minutes into the second stanza, Ngaro – after passing his concussion test – took it upon himself to change the course of the match with a superb individual try to extend the Asquith lead.

The 2014 Shield Player Of the Year then scored a superb second try in eight minutes when he finished off a right side shift up attack midway through the second half for the back breaking try. Tukupua converted for a 16-4 lead.

Barker scored his 11th try of the season with 16 minutes to play to virtually seal the Asquith win at 22-4 with Tukupua's conversion, before Ngaro finished an eventful afternoon when sin binned by referee Tim Hannon for a back play flare up with 10 minutes left.

Tukupua finished off the Asquith win – and gained the vital for and against percentage to move the home side back into the Top Four – with the last try of the match with eight minutes left.

Cabramatta consildated their place in the Top Eight with a hard fought 34-26 win over Guildford at McCredie Park last Sunday.

Winger Jason Jana scored two early tries to give Cabramatta an early lead, before Guildford replied with tries to winger Leslie Ngaulafe and prop Austin Dias to cut the visitors' lead back to 12-10.

Opposite Cabramatta winger Jahvis Moke scored his first try midway through the first half to extend the visitors' lead to 18-10 with Jayden Yates' third successful conversion – a lead held to the half time break after both sides had further chances to score in the closing stages of the half.

Moke scored his second try early in the second half to extend the Cabramatta lead before Guildford mounted a comeback with tries from hooker Alec Bush from close range out of dummy half, and interchange back Mohamad Soultan to get within striking distance.

Cabramatta centre Emosi Alamoti then scored the critical try, before Jana completed his hat trick inside the last 10 minutes to secure the Cabramatta win at 32-20 after Yates landed his fourth conversion from six attempts.

Any faint hope of a Guildford comeback was dashed when five eighth Brandon Sly was sent off with five minutes to play. Yates converted the resultant penalty goal for a 34-20 lead.

Guildford backrower Tangiere Hokai scored the last try of the match in the closing stages to at least give the home side the last work. Nathan Masima converted to cut the Cabramatta winning scoreline to 34-26.

Finally, the Hills District Bulls returned to the winners' list with a 38-28 win over Penrith Brothers at Hickeys Lane, Penrith last Sunday.

After a tight opening period between the two struggling outfits, Bulls fullback Rory Brownlie opened the scoring with the opening try in the 15th minute.

Deburtant half John Dunn scored his first try on the Bulls next attack to extend the lead to 10-0, before Brothers came back with tries from interchange players Roland Hunter and Regan Wood to take a 12-10 lead after Masi Fidow converted both tries.

The Bulls then regained the lead with backrower JP Hannawe's first try eight minutes from half time, before Bulls hooker Joel Bradford scrambled over from dummy half four minutes from the interval to give the visitors a 20-12 lead at the break after Jake Curran added the extras.

Brothers winger Nathan Hamilton scored seven minutes into the second half to bring Brothers back to within two points after Fidow converted.

The Bulls then dominated the next passage of play in the middle of the second half. Hannawe scored his second try 15 minutes into the second stanza, before interchange player Isaac Gorman scored three minutes later to give the Bulls a handy 32-18 lead after Jake Curran and Andres Rossini respectively converted both tries.

Unlike the previous week against St Marys, Brothers came back strongly to set up a grandstand finish. First, backrower Wiki Tuavao scored with 15 minutes left, before Fidow crossed for his try with 10 minutes left. Fidow converted his own try to cut the Bulls lead to 32-28.

The Bulls then steadied with Dunn scoring his second – and the match winning – try with four minutes to play. Rossini added the conversion to complete the Bulls' 38-28 win.

St Marys' win now sees them stand alone leaders on 20 points ahead of East Campbelltown on 18, with Wentworthville now joined by Asquith and Moorebank in that order on percentages on 16 points.

Cabramatta and Guildford are next on 11, with Belrose rounding out the top eight on 8 points.

Blacktown and the Bulls are still hopes of making the finals on 6 points, with Penrith Brothers still at the foot of the table on four points.

All matches in Round 12 will be played on Sunday afternoon again this weekend – with the St Marys clash against Moorebank at Hammondville and the Asquith showdown with East Campbelltown at Storey Park the best matches of the Round.

Tony and HHH FM cover the Ron Massey Cup and the Sydney Shield each weekend – and the team will gear up for another huge day of coverage this Sunday.

Then on Sunday night at 7:00pm, the team returns with the replay of the critical Sydney Shield match from Lionel Watts Reserve, Belrose between the Belrose Eagles and the Blacktown Workers Sea Eagles.
All of Sunday's matches – live and delayed – be live on 100.1FM and via web streaming at www.triplehfm.com.au. 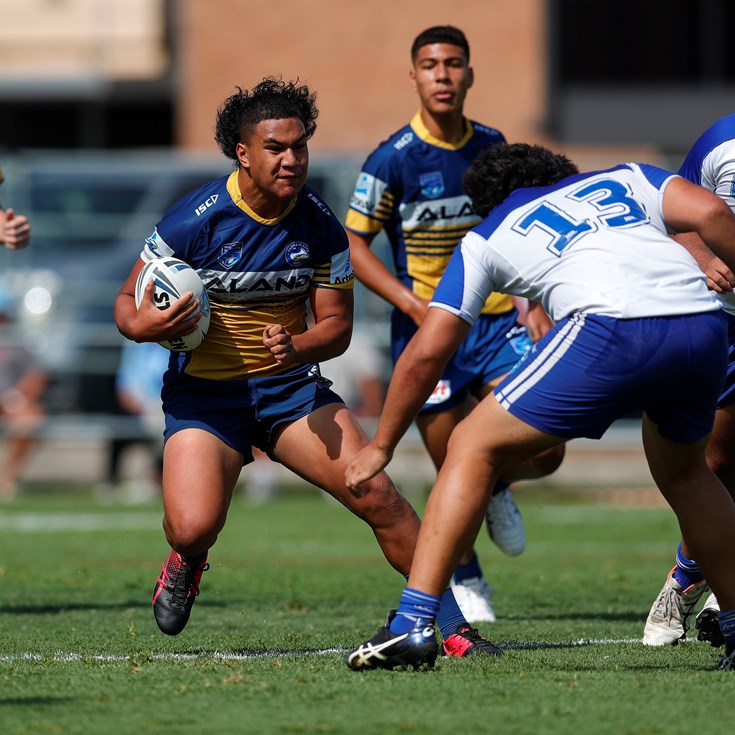