Penrith Panthers have overcome an early 18-0 deficit to stun the Wyong Roos 36-32 in the sides' Round 22 clash – snatching the two competition points in the final minute of play, notching an eighth-consecutive Intrust Super Premiership NSW in the process.

Trailing 32-30 with under a minute to play, mid-season signing Siosifa Talakai took it upon himself to see the Panthers home. Sensing an opportunity close to the line as time ticked away, the nuggety forward charged his way in for the match-sealing try.

Having sealed the minor premiership in Round 21, the Panthers continued their surge towards the finals series in the six-tries-to-five win, in a match which also saw 2018 Under-18s Origin and UNE SG Ball-winning captain Shawn Blore make his senior debut.

But as was the tale of the match, the Panthers were made to work tirelessly for the win.

Wyong raced out to an early three-try lead, and opened the scoring in just the fifth minute of play when experienced hooker Mitch Williams darted from dummy-half to set up the bullocking run of Nat Butcher.

Butcher crashed his way across from close range, skittling the Panthers' defence to see the Roos to a 4-0 front. Mitch Cornish converted to take Wyong's lead to six.

Cornish soon after had a try of his own (14th) as the nippy No.7 danced his way through would-be defenders to find points.

Paul Momirovski capped the early attacking onslaught with his try (20th) from the base of the scrum, as Williams found Cornish on a short-side play before the half linked with the bustling centre.

But the minor premiers would hit back through Caleb Aekins – arguably the side's best this season – who scored in the 27th minute of play. Adam Keighran converted to lessen the deficit to 12.

The Panthers' passage back into the contest was made simpler when Sitili Tupouniua was sent to the sin-bin in the 35th minute, and the hosts took full advantage just two minutes later.

The hosts worked possession into an attacking zone and opted for Keighran's trusted boot at the end of the prevailing set of six.

Big Maika Sivo leapt above the Roos' pack, collected the ball and unloaded in one motion, as Sam Smith touched down (37th) for points just before the break. Keighran again raised the touch judges' flags to see the score to 18-12 to half-time, Wyong's advantage.

Roos fullback Luke Sharpe went in for a try (42nd) to ensure the second-half started much the same as the first. Cornish converted to once again see Wyong take a 12-point lead.

That lead was short-lived though, as Sivo and Aekins raced in a pair of tries (45th, 49th) to level the scores at 24, with 30 minutes remaining.

In a gripping contest, Wyong again hit the front courtesy of centre Matt Ikavalu. The ensuing shot on goal was waved away, meaning the score remained 28-24.

Debutant Blore marked the occasion with a try (59th), and Keighran's conversion from close to the post had the Panthers back in front 30-28.

In a see-sawing clash, a pair of penalty goals via Cornish's boot (67th, 69th) had the Roos back in front with 10 minutes to play.

And so, it would look like the Roos would shore up their place in the competition's top eight.

But it wasn't to be.

A penalty for an incorrect Roos play-the-ball had the Panthers in 'good ball' with under a minute to play, and Talakai did the rest – breaking his way past defenders and over the line for the clincher.

Keighran maintained his perfect record with the boot, converting the Blore try to post the full-time score of 36-32. 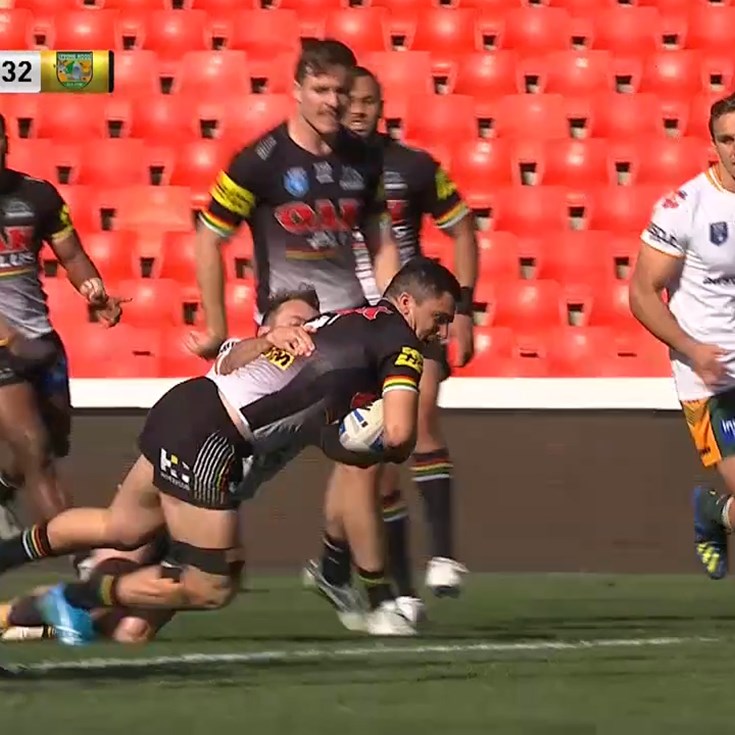