The Wentworthville Magpies take their finals hopes into the final round of the regular season after overcoming a second-half fightback from Mounties to record a morale-boosting 22-16 win, played in blustery conditions at Ringrose Park.

The win was built off the back of some blistering first half plays from their late inclusion at fullback, Bevan French, who scored one scintillating 70-metre try and set up another with sheer pace, before a second-half double to rangy backrower Dane Aukafolau sealed the two competition points for the home side.

French, along with Josh Hoffman and Cameron King, bolstered a Wentworthville side that had to do it the hard way –  having conceded a 14-6 half-time lead to trail by two, midway through the second-half before regaining ascendency with two late tries.

The loss continues the late season slide for one-time competition leaders Mounties, as they slide out of the top four, with this latest lost and need a win next week against an in-form Dragons outfit to at least take some momentum into the finals.

After both sides took time to adjust to the tricky conditions, it was the home side who opened scoring when French scored a breath-taking 70m try, go around then through the Mounties left-edge defence to score untouched to give the Magpies a 4-0 lead after 18 minutes.

Wentworthville were in again shortly after when a half-break through the Mounties’ middle inside their 20 by five-eighth Rhys Davies resulted in a converted try to prop Haimona Hiroti to lead 10-0.

The home side scored again in the 23rd minute when French broke through the Mounties’ right edge defence from deep inside his own half, before finding halfback Dylan Brown backing up on his inside to push the lead out to 14.

Mounties’ reduced the gap to eight, just before the half hour mark when some second phase on the Magpies try line enabled Sam Duggan and Sitiveni Moceidreke to combine for a try in the left corner to winger Tony Satini.

Mounties’ opportunity to reduce the gap just before the break was hampered when late inclusion Liam Knight was sent to the sin-bin for dissent by referee Kasey Badger when his side was in a good attacking position inside the Magpies’ 20.

With the wind at their backs in the second half, it was Mounties, having weathered the storm with twelve men, gained the ascendency to snatch the lead 16-14, midway through the second half with two consecutive tries.

Satini scored his second for the game when he finished off a sweeping backline movement to crash over in the left corner in the 52nd minute, before a lovely outside-in play allowed the fullback, Moceidreke to score from close range in the 63rd minute.

Just as Mounties finally had all the momentum, the game turned on its’ head from the kick-off when the ball was allowed to bounce into touch.

The home side capitalised, applying concerted pressure on the Mounties’ goal-line defence, before Aukafolau, with a stepping run, bouncing off the posts to reach out and score and despite the missed conversion from in front by Davies, the home side had regained the lead 18-16 with 11 minutes remaining.

And it was a lead they never really looked like conceding again save for a close call for Satini who was denied his hat-trick in the 76th minute, when a kick ahead from the winger went narrowly touch in-goal before he could get to it.

The Magpies put the icing on the cake with a second try to Aukafolau in the final minute of play, this time from a Brown grubber in-goal to secure a 22-16 victory for coach Nathan Cayless.

Wentworthville will now look to defeat the in-form Bulldogs at home next Sunday night in a game where their finals hope could well remain alive if results go their way.

Conversely Mounties will be searching for a much-needed win to take some momentum into the finals when they host St George Illawarra next Saturday afternoon at GIO Stadium. 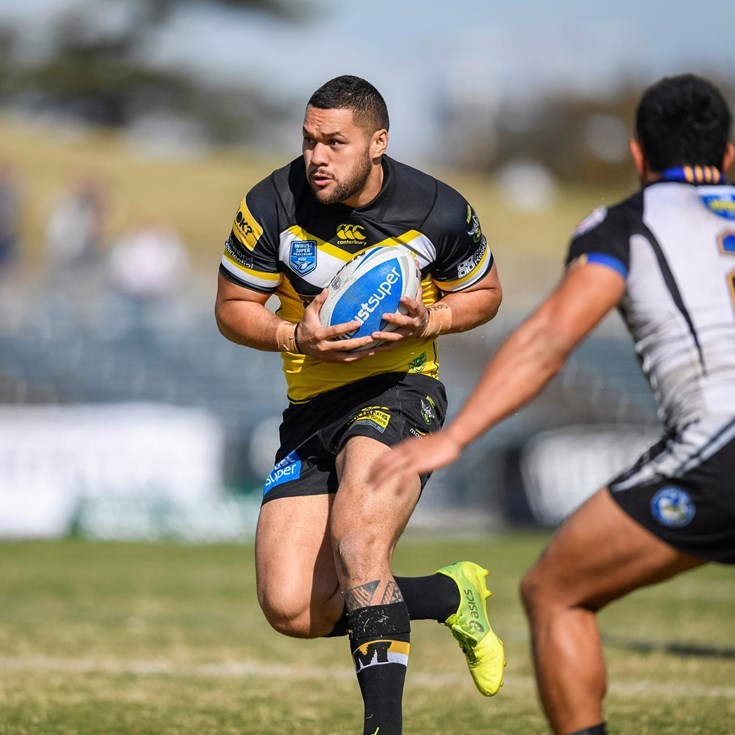