Australian second-rower Tyson Frizell's grandfather has never travelled to watch him play but he will be among the capacity crowd at Mt Smart Stadium for Saturday night's historic Test between the Kangaroos and Mate Ma'a Tonga.

"He has come over to watch Tonga but also to support me," Frizell said. "That is how much this game has had an effect on the Tongan community."

Frizell is eligible to play for Tonga through his mother Sophia and his brother Shannon, who made his international rugby debut this year for the All Blacks after he was born and raised in the island kingdom.

However, the St George Illawarra star never considered joining the likes of Andrew Fifita and Jason Taumalolo in defecting to Tonga for last year's World Cup and wants to continue playing in the green and gold jersey for as long as he can.

"I love playing for Australia, that has always been a dream and a goal of mine, and as long as I have that opportunity I will be doing everything I can to play for Australia," Frizell said.

"It is all I ever wanted to do, but I am pretty excited to be playing against Tonga and I am expecting a lot of people to watch."

The 27-year-old recalled going to watch Tonga play at Campbelltown Stadium in 2006 with his family and said most relatives on the side of his mother, who is the eldest of eight siblings, would be supporting him – but not the Kangaroos.

"We've never seen a game like this," Frizell said. "I have got a lot of family who have come over to see this game, more so because Tonga are playing.

"Other than my mum, they are probably all going to go for Tonga. They will be supporting me as much as possible but in the back of their minds they are hoping Tonga win.

"It is the first time my grandfather has travelled to watch one of my big games so this is pretty huge for him. That is what rugby league does, it gets everyone involved culturally."

Frizell also has an awareness of the significance of this Test in Tonga as he and his family would travel to the Pacific nation on a regular basis during his childhood to visit Shannon, who was adopted but denied entry to Australia by immigration authorities.

The brothers would play rugby union together in village tournaments and Frizell said the success of Mate Ma'a Tonga at last year's World Cup had a huge impact.

"Games like this give kids something to aspire to. They can dream that one day they will get to pull on the red jersey," he said.

"Growing up I spent a lot of my holidays in Tonga, especially with Shannon being over there, and I know how hard it is to come from the islands and be able to play NRL or Super Rugby. That is why I am so proud of him. He has exceeded all expectations, probably even his own.

"I am very proud of my Tongan heritage, and I like what the boys are doing by playing for Tonga and helping to put Tonga on the map."

Frizell concedes Australian supporters will be massively outnumbered on Saturday night and is looking forward to the atmosphere after watching Tonga's World Cup games in New Zealand last year.

However, he insisted the Australian players are just as passionate about the international game as their Tongan rivals and they are determined to put in a good performance after last Saturday's 26-24 defeat by New Zealand.

"We will probably have about 500 supporters and everyone else will be going for Tonga. I would say half of Tonga will be here. It is a small island and because of that it is not too often you see the country do well in sport.

"I am so happy for what they have done because of my background – as a fan and also being of Tongan heritage. It should be really exciting." 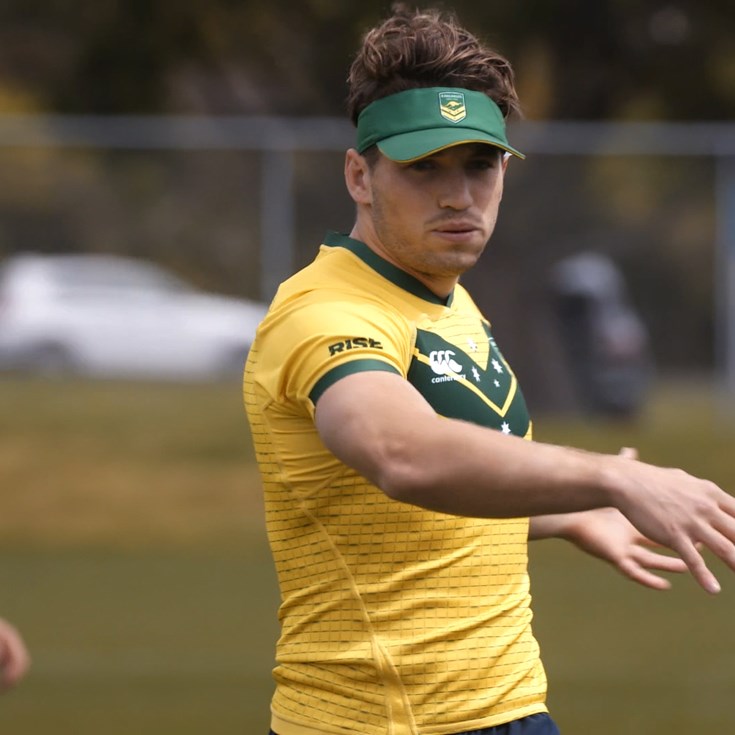 Murray to debut as Kangaroos prepare to take down ‘big’ Tonga

Tedesco Named Man Of The Match

Cook Out To Honour The Kangaroos No.9 Jersey