Panthers halfback Nathan Cleary has spoken of the family toll incurred as a result of the speculation over his own contract extension at Penrith and his father's highly-scrutinised decision to switch from Concord.

Nathan signed a five-year extension long before Ivan was eventually confirmed as a replacement for the sacked Anthony Griffin, but it didn't stop him and the rest his family copping heat during negotiations.

"It was unfortunate the way it happened at the Tigers but when you are offered your dream job and saying that you may never get it down the track, you've got to take it," Cleary said on Wednesday.

"I wasn't desperate for it to happen but it's just how it worked out that he got the opportunity. If he passed up that opportunity it may never have come again.

"It was pretty ridiculous, some of the stuff [that was said and written].

"One article said he was un-Australian for doing what he did. It was kind of tough at the time, more so on my mum and my little siblings because the Cleary name was just getting brought into disrepute constantly.

Nathan on life under Ivan

"Me and dad are kind of used to it now and that's the kind of world you live in when you play footy, but the little brother and sister were going to school and copping flak about it constantly.

"Mum was reading social media but we came together to sort it out and said to stay away from social media. We know what we want to do and the reasons behind it in the family and we got through it."

It was pretty ridiculous, some of the stuff [that was said and written]

Cleary insisted he was never really close to leaving his mates at Penrith to link with his father at Concord.

"There was even articles saying that I was a done deal there, it was weird. I don't even know how that came about," Cleary added.

"I didn't even want to think about a contract or any of that until the season was done so I could focus on my footy and that's the way it turned out. I was never really contemplating that to be honest, I think the facilities we have here, the people, the coaches, the players, I just love them too much and it was too hard to walk away from."

Cleary also rejected suggestions the pair would be under more pressure due to a perception Penrith had gone all out to reunite the pair.

"You have to perform anywhere you go. You never go to a team and think that not making finals or not being successful would be a satisfactory outcome," he said.

"There's always pressure with that. There's a lot more reasons why dad came out here rather than just me. That was just a bonus.

"The timing wasn't great but as I said, when you get offered something that may never come up again, if you pass it up, it's something you may regret down the track. It was unfortunate with the timing, but that's how it panned out."

The current pre-season will be the first time Nathan and Ivan have worked together professionally but it hasn't really kicked in yet due to Nathan still wearing a moon boot after an off-season ankle reconstruction.

Not that that has slowed down the jibes from his teammates.

"Reagan Campbell-Gillard makes a dad joke every single day. They're not funny at all but he keeps trying," Cleary laughed.

"They're all sweet, there hasn't been anything too bad. Most of them have worked with him before anyway. No one has been talking any smack behind his back!"

Now that the pair will be working so closely together, Nathan has decided the time is right to move out so as not to be in each other's pockets 24-7.

"I moved out the day before the pre-season, I haven't even spent a day with him while he's been my coach but it's good to get away from that so we're not constantly in each other's ear," Nathan said.

"They just live up the road so I still see him and mum a lot. I can't iron, the washing is just sitting in my bag and then I'll do it at 10pm at night. Cooking, can't cook. It's a real work in progress. That's why I'm single!"

While Cleary wasn't excited to be in the rehab group, he was appreciative of the club allowing him to delay surgery so he could travel through Bali and Thailand as part of a well-earned rest.

"I really appreciated that and they kind of said it to me, they said 'we want you to have a break, it's been a big year, just get away and relax and you can have the surgery when you get back.' I was really grateful for that and it worked out well I think," he said.

"It was an ankle reconstruction of the medial ligament, it was really stretched and they needed to tighten it all up. It's an old injury, I had it when I was 17 and it never fully recovered.

"After the Origin period and the big workload it just started playing up again and I was just maintaining that for the backend of the year with strapping. I probably could have played with it this year and just dealt with it but it was just one of those things that would never get better."

Cleary was aiming to have the moon boot off and be doing some light running by mid-December and be in full training in the second week back from the Christmas break with a view to playing at least one trial. 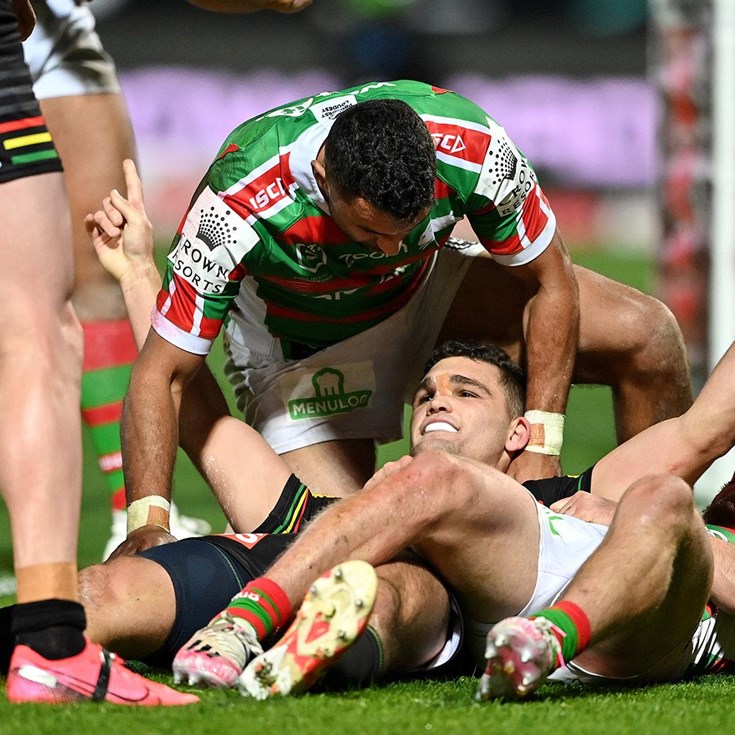 Cleary secures the win for the Panthers

Trolls and tribulations: Cleary rolls with the punches