James Roberts’ short-term playing future is under a cloud after slipping from NSW incumbent to the fourth-choice centre at Brisbane in the space of two months.

That fall from grace is set to also have implications for NSW if the 26-year-old does not return to first grade before the State of Origin side is announced in a less than a fortnight.

Roberts is set to be left out of the team to host the Sydney Roosters on Friday night after training with the reserves at Brisbane’s field session on Monday.

Gehamat Shibasaki and Kotoni Staggs trained in the centres with Jamayne Isaako back at right wing after he was dropped for the Magic Round win over Manly.

Roberts faces being dropped to Intrust Super Cup, where he is aligned to Wynnum-Manly Seagulls, but that may not be an option this weekend as the Seagulls play the PNG Hunters in Port Moresby and his visa has expired.

NRL.com understands he will stay in Brisbane and do his own training and not play for the Seagulls.

Roberts has not played a game since the round-eight loss to the Rabbitohs as the Intrust Super Cup had a bye last weekend due to the Queensland Residents v NSW Residents clash.

It appears there's no place for Roberts in the Brisbane side this week, despite Jack Bird being ruled out for the season with an ACL injury.

How has it come to this for the 2018 State of Origin series winner?

Brisbane coach Anthony Seibold said the form and attitude of Shibasaki and Staggs had been too good to ignore, while making it clear Roberts had been dropped on form after the loss to the Rabbitohs where defensive lapses proved costly.

Seibold said at his weekly press conference that speculation swirling around Roberts' playing future was not the issue and reiterated as far as he was concerned he would be seeing out his contract, which ends at Brisbane in 2020.

Roberts has no option in his deal like Kodi Nikorima did for next year.

The man nicknamed 'Jimmy the Jet' could ask for a release but his most likely destination of South Sydney has been scuppered with coach Wayne Bennett adamant on the weekend he would not be joining the Rabbitohs in 2019 or 2020 despite the recent retirement of Greg Inglis.

Seibold said Roberts had also not approached the club about securing a release.

Not playing Roberts against the Roosters, where a showdown with Latrell Mitchell loomed, would be a big statement by Seibold given that the corresponding clash last year was where he made a compelling case for NSW selection to inspire a 28-22 comeback victory.

After Mitchell had dominated Roberts in the first half, he came out in the second to stand up Mitchell and send Isaako in for a try before racing 70 metres to score himself. It was a try that brought back memories of Steve Renouf’s 1992 grand final stunner for Brisbane.

Tackle of the week: Magic Round

Renouf, an analyst for NRL.com, has been a vocal supporter of Roberts and in his column last week said that the star centre should not have been dropped by Seibold given Souths had opened Brisbane up "like a can of sardines" in the middle.

He has also been frustrated at the Broncos' failure to provide Roberts with quality ball, and has called for him to play left centre outside Anthony Milford where he believes he would be more of a threat.

A nagging Achilles injury has also been a factor in limiting Roberts at times although he has shown great courage to play through it.

Try of the week: Magic Round

NSW’s centre options have been hit by the injury to Bird and the unavailability of Tom Trbojevic. The Blues brains trust was hopeful Roberts would get two games in for Brisbane and find top form ahead of the Origin side being announced in less than a fortnight.

Brisbane winger Corey Oates was asked where Roberts' standing at the Broncos was after training on Monday.

"I’m not really sure where Jimmy is at," Oates said.

"He has turned up to training doing his usual thing. It is probably pretty tough being in that position. I think he is doing all the right things to get his spot back.

"I’m not the guy that picks the team … but he is rocking up doing all the training and in the gym. He’s doing all the recovery, going to meetings and everything that we ask."

Roberts is set to be named in the Broncos' 21-man squad on Tuesday and Seibold will have the option of making him a late inclusion against the Roosters. 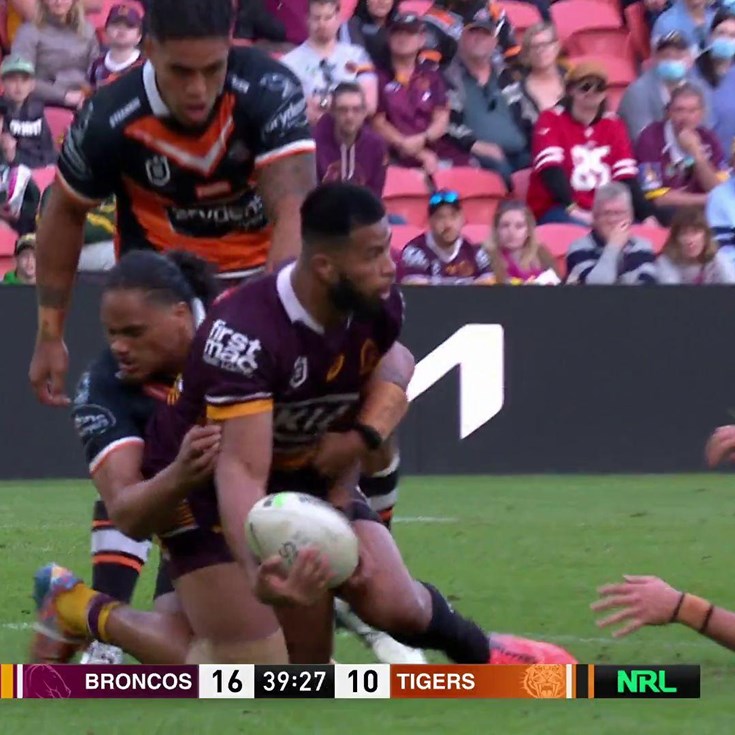 Loss of Roberts adds injury to insult for Brisbane