Cody Walker believes he is ready for State of Origin and would be willing to play the No.14 role for NSW, but the South Sydney five-eighth’s immediate focus is on representing the jersey designed by his uncle Joe for Saturday night's Indigenous Round match against Wests Tigers.

Walker, who is vying with Sydney Roosters five-eighth Luke Keary for the Blues No.6 jersey, grew up watching Joe play for the Tabulam Turtle Divers in the Group One Second Division competition, which the team won or were grand finalists for 19 consecutive years.

“He is a great man, he is very well respected in the Bundjalung Nation,” Walker said.

“I remember watching him play as a young kid, the Tabulam Turtle Divers versus Wardell Magpies was a huge rivalry. 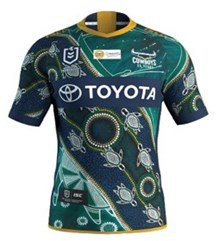 “He was one of the most feared props running around. It was brutal, and it was just great to watch. They could generate a great crowd for local games in our area. He was very well respected in footy up there and he is a great community man. He has got a great talent for painting."

Joe Walker won a competition to design the Rabbitohs’ jersey for the 2017 Indigenous Round and he was again chosen for the honour this year.

The club’s six Indigenous players, including recently retired captain Greg Inglis, decided that the 2019 jersey should maintain the traditional red and green hoops worn by Souths since the game’s foundation in 2008. 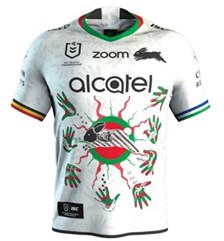 “It’s just a great representation of us as a community and us as a club,” Walker said.

“Everyone has got their hand-print on the jersey and we wanted the totem inside the hand-print.” 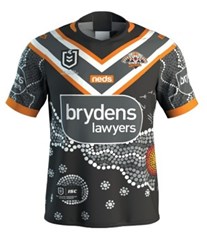 Gagai said Indigenous Round held special meaning for all players and he was proud that each of the NRL’s 16 clubs had their own specially designed jerseys.

“It is not a competition for which team has the best design, it is just about acknowledging the traditional owners of the land and the Indigenous players that have come before us, like big Artie Beetson and my favourite growing up as kid, Matty Bowen,” Gagai said.

“We get to keep the jerseys afterwards so it is a very special one for myself and all of the boys – not just the Indigenous boys, I know all of the non-Indigenous lads enjoy playing in this game and representing this jersey as well.”

Gagai is set to be named in the Queensland team next Monday and he has been involved in promotions for State of Origin with Rabbitohs and NSW hooker Damien Cook.

Walker and halfback Adam Reynolds are also in contention for the Blues, along with lock Cameron Murray, while second-rower Ethan Lowe could line-up for the Maroons.

“I do have confidence in the way I play and I feel like I am ready but I will never really know unless I get there,” Walker said.

If the selectors opt for Keary at five-eighth with either Reynolds or incumbent halfback Nathan Cleary, Walker said he would be able to play the bench utility role if Fittler wanted him to.

“I have played fullback, I have played five-eighth, obviously halfback and I could slot in at hooker so I could do that,” he said.

“It’s obviously a dream of mine but individual performances don’t get you into those sort of arenas, it is what you do for the team and if you do your job within the team to the best of your ability those sort of things look after themselves.”