Live coverage of the first week of the finals in the Jersey Flegg Cup.

Canterbury-Bankstown Bulldogs have overcome a sin binning to score a gritty 22-18 win over the Newcastle Knights in an Elimination Final at Campbelltown Stadium.

In what turned out to be an absorbing match with no love lost between either side, the Dogs overcame hooker Zac Hetherington being sent to the sin bin for a professional foul late in the second half to register a memorable win.

The moment of ill-discipline looked like being costly when Knights winger Justin Worley scored in the corner in the next set to lock the scores up at 18-all.

However, the Knights were able to further any capitalise on their advantage and things went from bad to worse when the Bulldogs scored through Declan Casey to take a 22-18 lead with only 12 men on the field. It was a lead they wouldn’t surrender until fulltime.

There had been little separating the sixth-placed Bulldogs and seventh placed Knights on the ladder at the end of the regular season and both teams carried that form into their sudden death final.

The Knights were the first to post points after centre Onosai Aunia used his brute strength to drag three defenders over the line before rolling around to plant the ball down for a 4-0 lead.

The Bulldogs put themselves back into contention on the back of a huge charge from Devontai Seumanutafa followed by a penalty after Alex Seve was taken out on a kick chase.

The Dogs elected to run the ball rather than take a shot at goal and the gamble paid off when backrower Justin Filo charged over the line to help put his side back in front 6-4.

The tit-for-tat battle continued when Knights backrower Ben Talty ran a terrific line back inside, stepping and jinking his way past the Dogs defence to score underneath the posts.

The Knights held a 10-6 lead but it wasn’t for long with the Dogs scoring again through centre Frank Kuresa 10 minutes before halftime to take a 12-10 lead into the break.

The Knights retook the lead when play resumed after Aunia grabbed his second try of the game but constantly invited the Dogs back into the game through poor discipline.

That eventually came back to haunt them when the Dogs took advantage of better field position from a penalty for Sua Ailoilo to crash his way over the line from short range.

Topine landed the conversion to put the Bulldogs up 18-14 but the match swung back in the Knights favour after Hetherington was sent to the sin bin and Worley scored in the corner.

The South Sydney Rabbitohs have prevailed with an enthralling 32-24 victory over the St George Illawarra Dragons to progress through to the second week of the Jersey Flegg Cup finals.

It was an incredible Elimination Final at Campbelltown Stadium with both sides willing to play an attacking brand of footy from start to finish – the difference being the Rabbitohs gutsy defensive efforts in the dying stages to hold out a fast-finishing Dragons outfit.

Kane Allen ensured an early 16-6 lead to South Sydney with a scintillating double in the opening 20 minutes – opening the game with his first in just the fourth minute of play before snatching a 90m intercept and saluting with a customary Latrell Mitchell try celebration.

Although the Rabbitohs were relentless in their pursuit of a healthy half-time lead with a try to Joshua Cook in the 28th minute, Dragon's duo Tyran Wishart and Cody Ramsey left no stone unturned with their efforts for keep the game alive.

Wishart produced a dazzling run in the eighth minute to send Ramsey over for their first before finishing the opening half with a pinpoint kick for the dynamic no.1 to set a 20-10 lead at the break.

Sam McCann opened the Dragons account in the second-half with a stunning leap in the left-hand corner to reduce the deficit to four, although their momentum lasted little time as the Rabbitohs responded with two tries in quick succession.

Their first came after James Tautaiolefua burst through and found Marc Zaurrini with a late offload before Lachlan Illias extended their lead with an impressive individual effort of his own just five minutes later to grab his second try.

McCann grabbed his double just moments after conceding two tries in a rapid-fire 10 minute period to give the Dragons a glimmer of hope, while opposing winger Dante Lusio caused plenty of havoc down the right-edge in their efforts to claw their way back into the contest.

Although the Dragons threatened for a late comeback with some last-gasp second-phase play, their efforts would die wondering as the Rabbitohs secured a fighting win to keep their season alive.

The Penrith Panthers and Sydney Roosters could not be separated after regulation time nor extra time before Dane Laurie finished the game of his life with a field goal to send the Panthers into the Preliminary Finals.

The Roosters got on the board first when Ethan Quai-Ward made a good run towards the corner after a tight opening tussle.

Penrith hit back within five minutes when Alex Myles charged onto a ball and stretched out to score, before the Roosters returned the favour almost immediately when Jake Hazard made a line-break and put in a kick for McKenzie Baker to cross.

The teams were going try-for-try when Glenn McGrady pounced on a Daine Laurie grubber to give the Panthers a small lead at the half-time break.

McKenzie Baker ensured the see-saw score-line continued when he opened the second half scoring for the Roosters, before the Panthers kept it going when Laurie just held onto a pass, managed to keep his arm above the ground and crawled his way over the line.

Penrith finally broke the cycle with 10 minutes remaining when Ezraa Coulston put Jack Jones into space for him to score in the left corner to take a 20-16 lead.

A freakish effort once again locked the scores up at 20-all when Jake Hazard put in a perfect grubber which sat up for Reihana Marsh who juggled it whilst trying to re-gather and somehow turned around to catch it behind him and score.

The Roosters received a penalty with one minute remaining 20 metres back but out wide and the attempted conversion hit the post meaning the game went into extra time.

With six seconds left in the first half of extra time, Laurie skipped towards the posts but sharply turned to the sideline, created an overlap and after a string of passes, Terrell May scored in the corner to give them a 24-20 lead with only the second period of ET to go.

The Roosters got a perfect chance when a kick was split on the Panthers’ line and they received a scrum 10 metres out and they capitalised on the chance by shifting the ball out to Christian Tuipulotu who scored in the corner to make it 24-all with two minutes remaining.

Trindall missed a field goal attempt for the Panthers with 40 seconds remaining and with that we were off to golden point.

The Roosters made an error off the kick-off set and when Laurie had a chance from in front, he didn’t miss to send the Panthers into the Preliminary Final.

Canberra Raiders bit back at the top of the table leaders Cronulla-Sutherland Sharks in a down to the wire 19-18 win into extra time on Saturday afternoon at Campbelltown Stadium.

The first and fourth ladder placeholders showed no mercy to their respective opposition in a tough battle to claim the qualifying final and advance to preliminary finals in week three.

The Sharks were looking determined and dangerous in the opening half, with a try by fullback Jonaiah Lualua putting the first four points on the scoreboard, followed 15 minutes later by teammate and winger Josh Delailoa who won the race to the try-line.

Canberra were 8-0 down but saw no threat as hooker Kyle Paterson closed the second half with a try for the boys in green and sent them into the changerooms only two points behind thanks to a successful conversion by Tobias Westcott.

The Raiders opened the second half just like they closed the first – with a try by centre Gideon Afemui. Their number one Manase Kaho bagged himself a try too three minutes later making the score 18-8.

Superstar shark Josh Delailoa earned himself a hat-trick when he scored another two tries in the 60th and 65th minute, with one being successfully converted by Lualua to level the scores.

It was down to 18-all and 7 seconds on the clock when Raiders halfback and three from three converter of the day Westcott was brave enough to attempt 50 metres out from the post, only just slightly missing it.

Going into extra time, the strong gusty weather posed a huge challenge to whichever side would attempt a kick, but Westcott booted a field goal with two minutes left in the first half to put Canberra up 19-18.

Cronulla fought hard for the second half of extra time, but in the end Canberra defence were too strong and they marched away with the win. 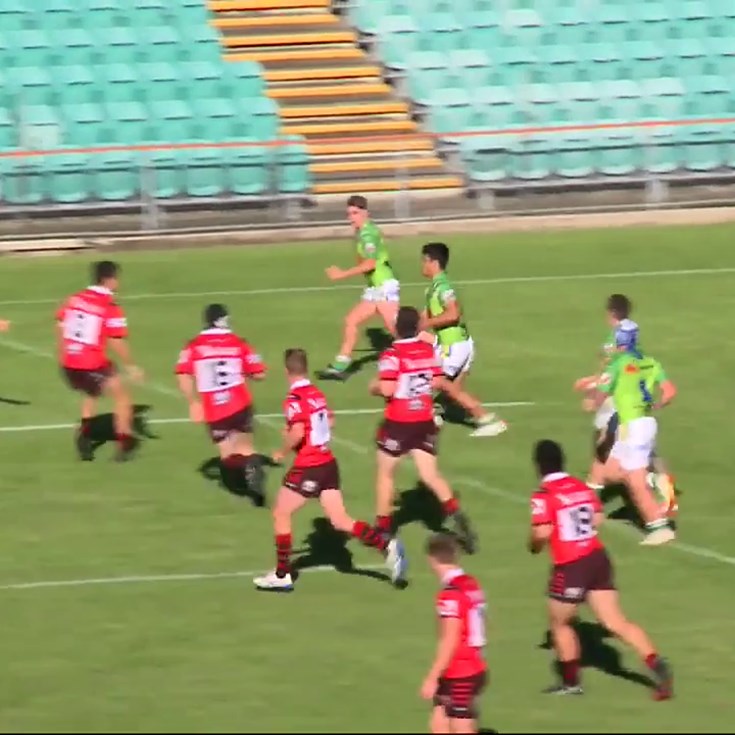