St George Illawarra coach Paul McGregor has declared that Ben Hunt will remain at hooker and Cameron McInnes at lock for the immediate future after rookie halfback Adam Clune steered the Dragons to a 28-22 comeback win against Canterbury on Saturday.

With Clune turning in his best 40 minutes at NRL level in the second half to lay on tries for Jason Saab and Matt Dufty that levelled the scores at 22-22 before Corey Norman snatched victory just before fulltime, McGregor said he had no reason to change a successful combination.

“That was the best 40 minutes he has had this year, without a doubt,” McGregor said of Clune. “His second 40 minutes was really pleasing for a guy that is still very young in his career as a first grader.

“We needed him to go to the game and he went to the game at the right times and controlled possession well and field position.”

Hunt has made no secret that he would prefer to return to his usual halfback role, while McInnes prefers hooker, but McGregor said the form of Clune made that unlikely at this stage of the season.

He also explained that he wanted Hunt and McInnes playing in the middle of the field as the Dragons were missing the experience of former NSW lock Jack de Belin, who has been stood down under the NRL’s no-fault stand-down policy, and recently departed English prop James Graham.

Dufty double has the Dragons level

“All Cam wants to do is win so Cam is comfortable playing a role for the team at No.13. It is the same with Benny,” McGregor said. “He wants to play No.7 but he is playing No.9 for the team.

“That’s what the team needs right now. We are missing some experienced players in the middle third of the field that aren’t with us at the moment.

"They are doing a very good job as a combination there and it is going to stay there because at the moment Jack is not available and we let James go so we need minutes people and they are both minutes people with experience.

“It is that simple. The other thing that forces change is how well people go in place of them and Adam is doing a good job at No.7.”

Clune, who made his NRL debut in round four against the Bulldogs, said he was feeling more comfortable in the role now and was improving with each game.

The 25-year-old playmaker put in a long kick that was fumbled by Canterbury fullback Nick Meaney for Saab’s 65th minute try and then sent Dufty racing away for his second try after breaking into the clear 30 metres out from his own line.

“I put a bit more onus on myself to get more involved in the game and being behind by that amount of points we had to stick to our game plan and luckily enough we came up with some good plays and won at the end,” Clune said.

Saab cleans up a Bulldogs mistake to score

“They are both really supportive of me and that is beneficial for my game and gives me confidence. I am very grateful of the support of not only those two but the rest of the team and the coaching staff.

Aitken slices through on the left edge

While he had second-rower Tyrell Fuimaono on his inside when he busted the Canterbury defence, he knew that Dufty would be on his outside and was confident the fullback would finish the try.

“We played in the NSW touch team together when we were in Year 6 and we have been really close since then,” Clune said. “We have always stayed in contact and seen each other at touch tournaments over the years before being lucky enough to play under-20s together.

“It’s pretty cool that we are playing first grade together and it is something I am very grateful for and that is special to me. We have got a great relationship off the field and I think that definitely benefits us on the field.” 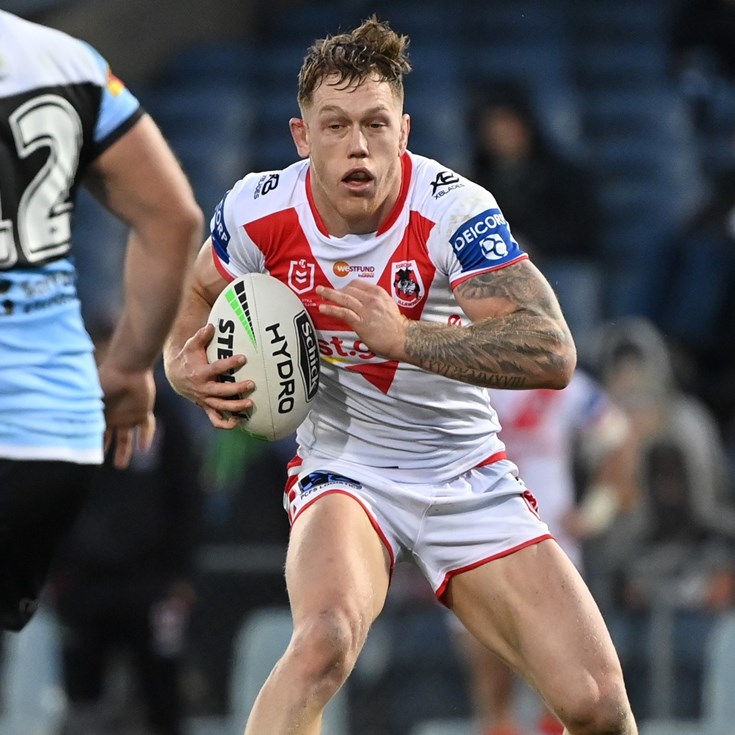 Clune will shrug off broken nose to make Dragons debut

Why McInnes no Longer Watches other NRL Games