Craig Bellamy says dazzling fullback Ryan Papenhuyzen continues to remind him of a young Billy Slater after another breathtaking display of speed and skill.

Papenhuyzen was on fire in Friday's 46-8 win over the Broncos where he ran for 274 metres, scored a try, set one up and made three line breaks.

"He reminds me a little bit of Billy early in his career," Bellamy said post-match.

"Billy was willing at training to take a lot of risks to try things out and Paps is a bit the same.

"I am a little bit more conservative so I give a bit of advice about when that is going to fit our game at the moment, but I love that he is trying things.

"When something is going to work for him and work for us he practices it and that's all I can ask."

Papenhuyzen scores from a Munster offload

When Papenhuyzen was told of Bellamy's remarks he had a chuckle.

"I'm not quite as erratic as Bill I don't think," he grinned.

His captain Cameron Smith was sitting beside him when he made the remark and joked "was that a sledge?"

Papenhuyzen said he was expecting a text straight away from Slater while adding that the champion Storm custodian "backed himself more than I do".

Wonderful inside ball from Papenhuyzen hands Hughes a double

"There are some things I need to work on but [Bellamy] says 'if you work on them I am happy for you to try them' so he gives you a little bit of licence," Papenhuyzen said.

"Especially in games like tonight where there are a few mistakes I have to rein it in, hang around the ball and be involved in that way.

"Billy has said from the start, 'Don't try and play like me. You are named in the side for a reason so play like yourself, do what you are good at and try to improve every game and every season'."

Papenhuyzen's game has improved greatly since he burst on the scene and he showed plenty of skill at Suncorp Stadium to go with his electrifying pace, including a superb right to left pass to Jahrome Hughes for a try when he was running at full throttle.

"His main strength is his speed but he has been working on a lot of other areas of his game to try and improve," Bellamy said.

"It is not just that he is quick. He is skilful as well and smart with the footy.

"He kicked that field goal against the Roosters here a few weeks ago but what you see on the field is not just him snapping his fingers and it happens. He works really hard to do those things."

Bellamy gave his side a dressing down at half-time after they led just 14-8 following an un-Storm like half.

"The second half was a big improvement.

“I'm not trying to play it down but I think we scored a couple of lucky tries and they had a couple disallowed and that they could have scored, so to me the scoreboard could have been a lot closer." 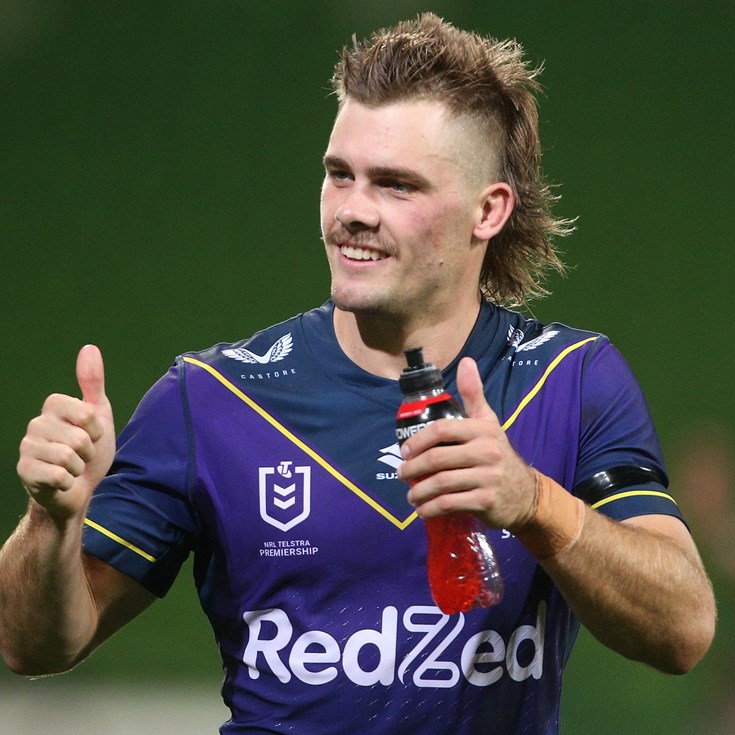