Penrith made it seven wins in a row by steamrolling Manly 42-12 at their Lottoland fortress on Saturday night with Panthers halfback Nathan Cleary putting his fingerprints on just about everything.

The match-up between the two Origin halves in November – Daly Cherry-Evans (Qld) and Cleary (NSW) – was always going to be a good one.

Cleary was an ever-present danger in attack with a 40-20, two try assists, scoring one himself chasing his own kick, alongside his seven goals.

Cherry-Evans rolled Viliame Kikau over on to his back to stop a try, raced 80 metres to bring down Brent Naden in a cover tackle, and provided the inside pass for Jake Trbojevic and the corner kick for Jorge Taufua to score Sea Eagles tries.  He also kicked a 40-20 to try to keep pace with his Origin rival.

Close behind Cleary was his hooker Api Koroisau, who would have been itching to make his comeback from an elbow injury so that he could play his old club – his first game at Lottoland since Manly’s qualifying final win over Cronulla last September.

He was also a headache, topping the Panthers tackle count (with 52) in a quality 73-minute performance, which included a late try under the sticks, after missing last weekend’s win over the Titans. Coach Ivan Cleary gave him a seven-minute early mark as a sign of respect for his work ethic.

But the artistry of Cleary and Cherry-Evans was a delight to watch and only whets the appetite for the 2020 State of Origin campaign.

Classy Cleary kicks for himself

The Panthers haven’t lost since going down to the Eels in round five and their clean-cut brand of football is proving hard to beat. They enjoyed 60 per cent possession by completing 42 of 44 sets to further underline their dominance tonight.

The Sea Eagles have now slipped out of the top-eight – nudged out by this loss as well as victories to the Sharks and Rabbitohs earlier this round.

They were after three wins on the trot but that goal wasn’t helped when they lost five-eighth Dylan Walker (foot) after just 13 minutes. It was his first game after six weeks out with an ankle injury.

There was further bad news with Curtis Sironen hobbling off with a right knee injury.

Virtually from the opening whistle winger Charlie Staines picked up from where left off at Netstrata Jubilee Stadium a fortnight ago by scoring two of the Panthers' four first-half tries.

The game was only seven minutes old when he found the grass just inside the south-west corner post with two Manly defenders on him.

His second came in the 24th and was even more spectacular as he leap-frogged another two hapless defenders to score while airborne.

It could have been a hat-trick as the Forbes Magpies junior was denied in the second minute when trying to ground a Cleary kick. But that’s now six tries in two games.

My tries, like my four tries the other week, they were off the back of good set plays,'' Staines said. "That was the case again tonight.

"On my way to the line with the second try, I felt a tweak in my hammy.

"I'll get it looked at and hopefully be back in a couple of weeks.''

Penrith were looking very comfortable leading 22-0 but Trbojevic pegged one back for the Sea Eagles when he barged over.

However, the half-time score of 24-6 – after a penalty goal to Cleary – meant there was plenty of catch-up work for the home side to do.

Another two tries for the Panthers – to Cleary and Naden – in the second half and it truly became mission impossible despite Taufua’s fifth try of the year for the Sea Eagles.

Staines picks up where he left off 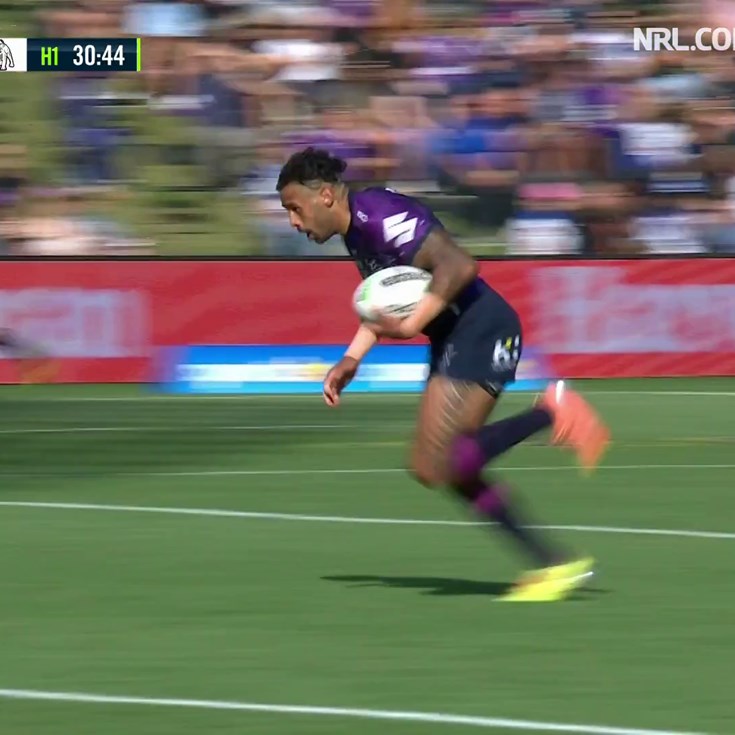 Addo-Carr intercepts a Lewis pass and sprints away

Cleary moves out of Maloney’s shadow