Penrith have equalled a club record eight-straight victories and sent an ominous warning to the rest of the NRL with a commanding 28-12 win over the Raiders on Saturday night.

The Panthers received a standing ovation from the home crowd after leading 24-0 in a dominant first half against a fifth-place Raiders outfit who had few answers despite chances early.

The only other time Penrith have strung together eight in a row was their premiership year of 2003 and the Class of 2020 has every reason to be confident of delivering the club a third title.

Viliame Kikau got the party started for the Panthers on the left edge when he ran a strong line off Nathan Cleary from short range.

Fellow Fijian international Api Koroisau was next to turn provider with a dummy and no-look pass that bamboozled Elliott Whitehead to send Liam Martin over near the sticks.

The Raiders had a chance to cross minutes later but Cleary turned attack to defence with a try-saving effort on barnstorming prop Josh Papalii.

The visitors were denied another four-pointer via the NRL Bunker with replays showing Jordan Rapana in front of a Jarrod Croker ricochet in the lead-up.

Stephen Crichton was next to cross for the Panthers – his 12th try of the year – with a reaching effort to ground a Jarome Luai grubber despite the presence of Nick Cotric in-goal.

An error from Cotric before the break enabled Brent Naden to put the exclamation mark on a clinical opening display with the Wellington-born winger acrobatically planting the ball down in the corner.

Cleary promises 'so much more to come' from wonderkid Crichton

Canberra's woes continued when play resumed with Jordan Rapana spilling a Cleary bomb and Siliva Havili making a simple error with his team on the attack.

The Green Machine showed signs of life in the 47th minute when Charnze Nicoll-Klokstad carried four defenders over the line to open their account.

A penalty goal via Cleary extended the Panthers' lead to 20 midway through the second half as the Raiders' discipline close to the line let them down on two occasions.

Raiders back-rower Corey Harawira-Naera had a moment to forget in his return to Sydney's west with the former Panther taking out Kikau in the lead-up to a possible George Williams try.

However, the Raiders weren't denied six minutes later when Nicoll-Klokstad slid over the line with momentum to narrow the lead to 14 with less than a quarter of the game left.

Nicoll-Klokstad slides over for his second

Rapana was in the thick of things again before the siren with his own flop on Josh Mansour not penalised – the Panthers awarded six-again but coughing up the ball near their try-line.

Further gritty defence from the Panthers denied the Raiders a chance to narrow the gap further as Cleary slotted a late penalty goal to cap a comprehensive win which lifts Penrith back to the top of the table ahead of a round 14 clash with the rejuvenated Warriors at the Central Coast. 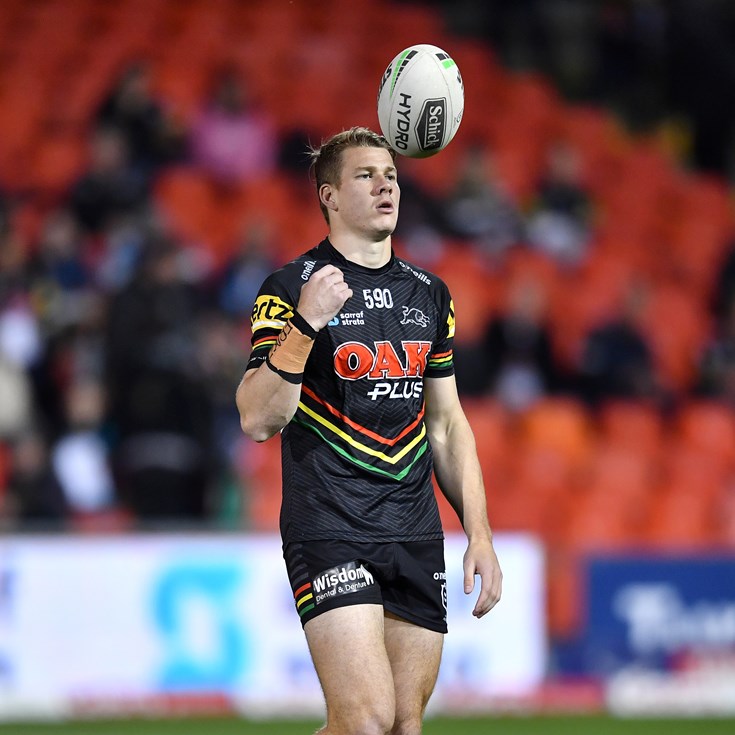