Roosters winger Brett Morris is believed to be the first man in premiership history to bag hat-tricks in the opening two rounds of a season.

The 34-year-old scored three times in the 40-6 smash-up of the Wests Tigers at Campbelltown Sports Stadium on Sunday to repeat what he achieved in last weekend's 46-4 win against the Sea Eagles.

NRL statistician David Middleton could not find any record of another first-grade player claiming back-to-back hat-tricks to start an Australian premiership season - certainly not from 1970 onwards.

"B-Moz scoring another there ... is nice for him to get rewards for how much he works in our game," coach Trent Robinson said.

Morris has been the finisher on a powerful right edge which will face its sternest test on Friday night when the Roosters play South Sydney for the first time since losing to their arch-rivals 60-8 last year.

"[That scoreline] will get brought up externally, and I think that will be enough. It happened," Robinson said.

"You can't erase it. What you can do is go out and play great footy. You don't run away from your mistakes, [you] accept it, but we'll go out and play how we want to play and not carry the weight of that."

Robinson said hard-hitting lock Victor Radley is set to return from an ACL injury and a suspension for an off-field incident to face the Rabbitohs, but dynamic hooker Sam Verrills remains "a couple of weeks away" with the same knee recovery.

The coach's big guns - namely James Tedesco and Luke Keary - were the engineers of the emphatic victory over the Tigers.

Halfback Keary set up three tries, including one for Morris with a great flick pass, and Robinson praised his game-management.

In collecting a double - following his round-one hat-trick - Tedesco notched up his own try-scoring milestone having now scored against all 16 teams with a total of 93 tries in 160 NRL games.

Being a Camden junior and attending St Gregory's College Campbelltown, it was a sweet performance for Tedesco at the expense of his former club. Robinson continues to be amazed by him.

"What he's doing is pretty remarkable in the amount of ways he's playing the game," Robinson said of his No.1.

"He's doing the traditional fullback kick-return role, then he's doing a forward's role in the middle of the ruck, he plays a halves role, he plays a high-support role, he swings out the back like a fullback.

"He's a very, very good player. I think I understated him. He's changing the way that I traditionally saw a fullback."

Tedesco hadn't scored against the Tigers in three previous clashes. He returned to Campbelltown Sports Stadium for the first time since his final season wearing black-and-orange in 2017.

Even despite the margin, with hooker Jacob Liddle scoring the only Tigers try, Robinson wasn't entirely pleased.

"I thought our first half, our defence – especially on early tackles – was poor. We had to discuss it at half-time. I think they made two-to-three breaks through there in the first half," he said.

Tupouniua isolates Brooks on the edge

"[But] I felt like we felt where the space was quite well and got there on the occasions we needed to, to get the points.

"We got better the longer the game went until the last five minutes. It was a good build throughout the game."

After Tedesco posted the first points thanks to a lovely in-field kick by Morris, the ageless winger shimmied past rookie Tigers fullback Daine Laurie to help give his side a 12-0 lead after 14 minutes.

Welcome to the NRL, Fletcher Baker!

Liddle's dummy-half try gave the hosts a brief sniff, but Sitili Tupouniua crashed through Luke Brooks to make it 18-6 at the break.

It was an unhappy 150th game for Brooks, with the halfback kicking the ball dead a couple of times and missing four tackles.

The Roosters were never troubled in the second half with Morris and Tedesco both quickly crossing courtesy of Keary before debutant bench forward Fletcher Baker dived under the posts.

Morris made history when he touched down in the 72nd minute after a bomb was uncontested, allowing Lindsay Collins to draw and pass. 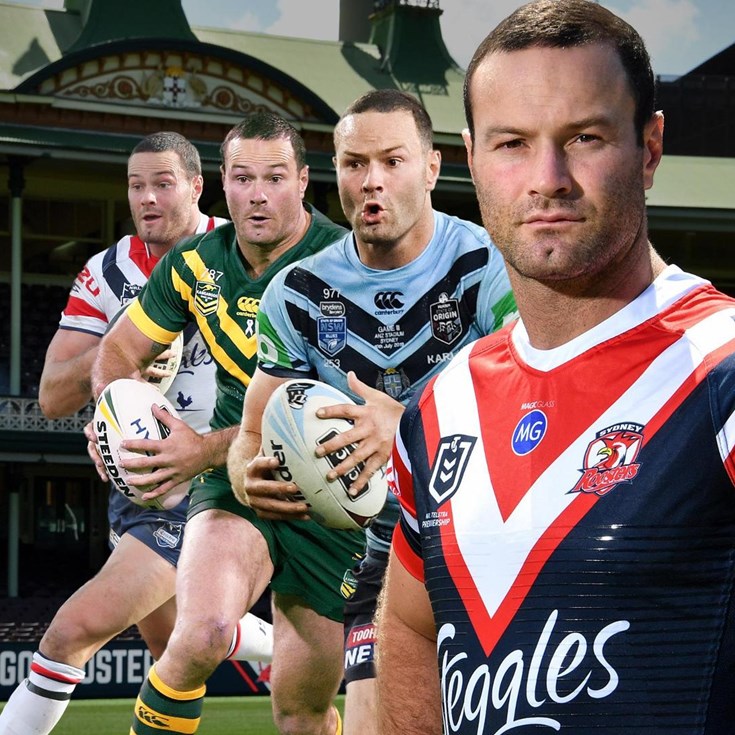 The boy from Old Bar who became a legend