Melbourne narrowly avoided a colossal boilover against the Cowboys to create Storm history by recording 15 straight wins in the same season for the first time.

Star fullback Ryan Papenhuyzen got through 34 minutes off the bench in his long-awaited return from concussion as the Storm scraped home 20-16 at Queensland Country Bank Stadium on Friday night.

Coach Craig Bellamy labelled Papenhuyzen "rusty" in his first game since being knocked out in round 10 by Dragon Tyrell Fuimaono.

The pocket rocket was clipped high in his first touch from a kick return but bounced to his feet with a smile.

"It's been a difficult nine weeks for him - not just physically or getting ready for it, but also emotionally and mentally," Bellamy said.

"In the early weeks, it didn’t look like he was making much improvement at all.

"But the last two or three weeks he's really brightened up and been doing most of what we've been doing at training.

"It was nice for him to get out there and get a run. I thought he looked really rusty, especially on some of the plays he didn’t know.

"Some of his runs weren’t typical Papenhuyzen runs. But that's what we expected and we’re really happy now that he's made that start."

With Papenhuyzen coming on for hooker Brandon Smith, who underwent a HIA, Nicho Hynes shifted to dummy-half and allowed the returning gun to occupy his favoured role at the back.

Despite resting State of Origin players Cameron Munster, Felise Kaufusi and Dale Finucane, the Storm began with a bang.

After scoring before North Queensland had touched the ball in the fourth minute, a lack of execution and uncharacteristic impatience resulted in Melbourne holding a slender 10-6 lead at half-time.

The Foxx seals the win with his 100th NRL try

The upset of the season was brewing when Cowboys winger Kyle Feldt bagged his 100th NRL try to put his team in front after 51 minutes.

But tries to Reimis Smith and Josh Addo-Carr, whose double also gave him a century of first-grade four-pointers, saved the Storm's blushes.

While Melbourne won 15 consecutive matches across 2012 and 2013, they hadn't achieved the feat in the same year.

"This one is pretty special. I am proud of them; it's been a difficult situation as it has been for all teams. But to do what they've done has been quite remarkable. They're a good bunch of kids," Bellamy said.

However, he said his troops looked for "the easy way" at the beginning of the game and needed to improve "or we’ll be making up the numbers at the end of the season".

Bellamy highlighted Jahrome Hughes as the driving force in Melbourne's revival with the halfback, who kicked beautifully all night, coming up with some important plays including defensively.

Feldt the finisher gets his 100th NRL try

A late four-pointer to North Queensland debutant Kane Bradley, despite an obvious forward pass, gave the hosts an opportunity to steal a win in the last five minutes but the Storm held firm.

Though Granville isn't totally unfamiliar with the position – he starred there in Wynnum Manly's 2011 Queensland Cup grand final win – he'd never filled the role in his long NRL career.

After Addo-Carr and Justin Olam crossed for the Storm, Cowboys forward Coen Hass stormed over the line on the stroke of half-time.

North Queensland rode that momentum but eventually, the perennial winners found a way once again to collect two competition points, leaving the Cowboys two wins adrift of the top eight. 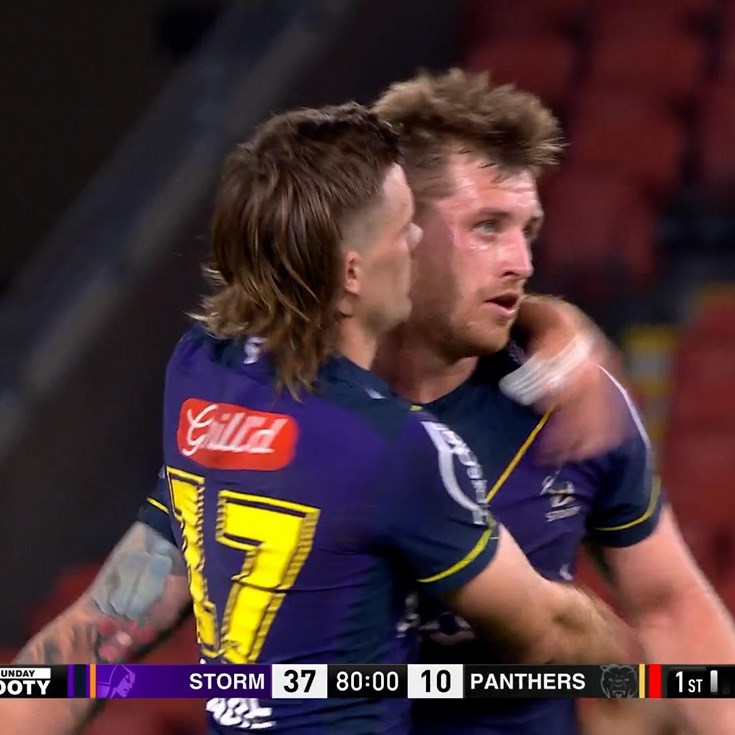 Milne pulls out the billi strut after Walker magic

The Foxx gets into the open

McLean will Thrive at Cowboys: Green