Despite a late scare from some Shaun Johnson magic, the Kangaroos hung on to record their second win of the Four Nations, holding out New Zealand 14-8 at Ricoh Arena in Coventry.

At half time, trailing 10-0, New Zealand's 200 minutes of Test football against Australia in 2016 had netted them just a solitary try – to Kevin Proctor in Perth last month.

Their two second-half tries amounted to more four-pointer than in their previous five halves of football against the Kangaroos combined.

Despite winning the offloads 15-8 and completing an impressive 81 per cent with 30 of 37 sets completed, the Kiwis couldn't find the big play in their opponent's red zone. Some early soft defensive misses ensured they were trying to play catch up from early on and allowed the Kangaroos to dictate terms.

In the first half they completed 16 of 18 sets but still trailed the possession stat by 54 per cent to 46 per cent.

Five-eighth Thomas Leuluai and fullback Jordan Kahu both aimed up but failed to provide the sort of playmaking support halfback Shaun Johnson requires.

The continued selection of Roosters back Blake Ferguson on the Kangaroos right wing has been one of the more debated decisions of Mal Meninga's tenure as Australia coach. There were whispers this week that specialist right-side flanker Valentine Holmes would return to the 17 to bump him out, with specialist left-edge winger, the in-form Josh Mansour, no chance of being dropped.

A knee injury at training that ended Mansour's tournament ensured Holmes and Ferguson both played and, after a strong outing against Scotland last week, Ferguson backed it up with a powerful man-of-the-match outing against the Kiwis.

A surging, tackle-busting long-range run in just the sixth minute set the tone. For the second game running he opened the scoring and had plenty to do when he beat three to score in the right corner in the ninth minute off the back of some good Michael Morgan lead-up work. His exceptional support play helped set up Johnathan Thurston for the team's second try just five minutes later and he also did the business off the ball, coming up with a big tackle on Gerard Beale to force a line drop-out later in the half.

A surging 60th-minute run, when he beat five players to miraculously escape from his own in-goal, was arguably the most important and impressive play he produced on the night in which he finished up with game-highs in run metres (228) and tackle busts (eight). The loss of Mansour is still a shattering one but Ferguson's form ensures it shouldn't be too costly in terms of this tournament.

Too little too late for hot-and-cold Johnson

If the Kiwis were to be a chance in this one they were always going to need a big game from mercurial halfback Shaun Johnson, but by the time he reached into his big bag of tricks and pulled out something other than fresh air the match was all but gone.

Two early attacking grubber kicks were so heavy they virtually bounced off the advertising hoardings past the dead ball line before any of his teammates had a chance to react and a 63rd-minute clearing kick that sailed out on the full was the last thing his team needed.

With the match all but gone he conjured a stunning chip and chase with a regather that led to a Jordan Rapana try and a grandstand finish before his solo run to the in-goal came within inches of potentially nabbing a late draw, but the Kangaroos managed to hold him up.

With impressive Test rookie Tyson Frizell rested, first-choice back-row pairing Boyd Cordner and Matt Gillett returned to the starting side. Cordner resumed his familiar left-edge role and was arguably the best forward on the field. He was everywhere in his 80-minute stint, racking up 162 metres from 17 runs with three tackle busts.

On the other side, Gillett was quiet in attack but still eked out 100 metres to go with his usual defensive output of 36 tackles. Senior man Sam Thaiday was again quiet off the bench but it would be a massive call for Meninga to drop either of the Maroons stalwarts for the big end-of-tournament games. However it would also seem a mistake not to find a spot for the in-form Frizell.

Elsewhere in the pack, bench prop David Klemmer produced arguably his best stint in green and gold with his powerful charges getting in the face of the Kiwis as he ran for 159 metres with four tackle busts, ensuring Meninga has some welcome headaches next time he sits down to choose a 17.

Among their other shortcomings on the night was a habit by the Kiwis of giving away penalties at the wrong time.

It started in the eighth minute when a late-set ruck penalty against Kevin Proctor handed the Kangaroos the first attacking chance of the game for either side. A few plays later Johnson gave the referee no choice but to hand the Aussies another penalty when he clung on way too long in a tackle and Ferguson scored moments later.

There was a double whammy 15 minutes into the second half when a silly cheap shot from Martin Taupau on Thaiday piggy-backed the Aussies downfield right after Solomone Kata's try – on the back of some good possession and field position – had finally got the Kiwis back into the contest.

On the fifth tackle of the next set in front of the posts, Tohu Harris laid too long in a tackle to hand the Kangaroos an easy penalty goal to kick out to an eight-point lead.

A fifth-tackle penalty in the same spot in the 70th minute for the same offence by Adam Blair gave Johnathan Thurston another easy two points.

It's those moments of ill-discipline, when added up, that can make such a big difference in an otherwise tight contest. 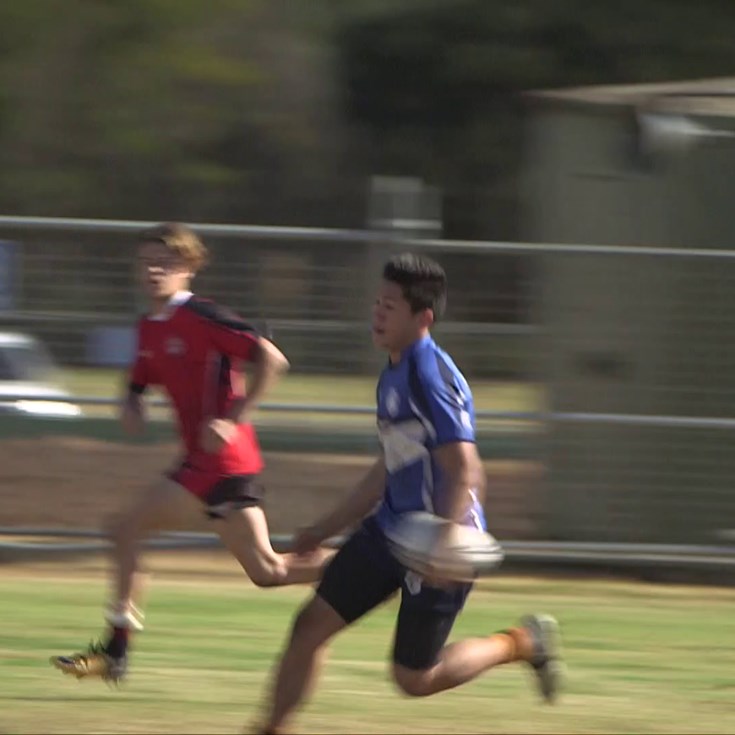