Sam Cook’s dream of facing up to the bright lights of NRL came true in a literal sense a fortnight ago, when he debuted for the Warriors at Optus Stadium in Perth.

The occasion was just as big as the game, with the light shows dressing up the beautiful new stadium and 40,000 people cheering on four NRL teams going at it in Round 1. It was enough of a spectacle for any of the players - let alone a young hooker from New Zealand playing his first-ever game in the big time.

He came off the bench in a winning Warriors outfit against South Sydney before playing in front of his home crowd the next week against the Gold Coast and while his minutes were limited, the taste of first grade was sweet.

“It was a bit of a dream come true, getting to go over to Perth a couple of weeks ago for Round 1. It was pretty unreal,” Cook told NSWRL.com.au.

“Exciting again getting to go home and play in front of my family and friends, by the time I got on (the field) the boys had pretty much done their job, so it was good to get out there and get a go.”

Cook found himself playing back in the Intrust Super Premiership NSW on Saturday, with Jazz Tevaga being elevated into the NRL in his place. With Manaia Cherrington also in the squad, there is a healthy competition between hookers at the Warriors.

It was a bit of a dream come true getting to go over to Perth.

Issac Luke is a legend within New Zealand Rugby League, and is rightfully holding down the starting hooker role in the Warriors NRL team. He’s played an imperative part in their opening three wins of the season and looks to be playing at the standard that he did at South Sydney.

It’s a privilege to have such a player mentoring the young crop of hookers coming through, and Cook is thrilled to be learning off him each day.

“Growing up watching him play, he’s been one of the form dummy-halves in the NRL for the last 10 years, so getting the opportunity to get out there and play alongside him is unreal,” Cook said.

“He’s been a great mentor the past couple of seasons, taking the lead. Obviously the last couple of weeks he’s been playing unreal footy so that’s all you can ask of him at the club.”

The Warriors went down to the Penrith Panthers yesterday in a tight 18-16 encounter, where Cook and Cherrington shared the dummy-half duties.

For Cook, being back in the Intrust Super Premiership NSW has made him hungrier to get back in that NRL side.

“It’s what we all play reserve grade [Intrust Super Premiership] for, to knock on the door of NRL,” Cook said.

“I’ve just got to play some decent footy and get some consistency and if I get my opportunity again I’ll grab it with both hands.” 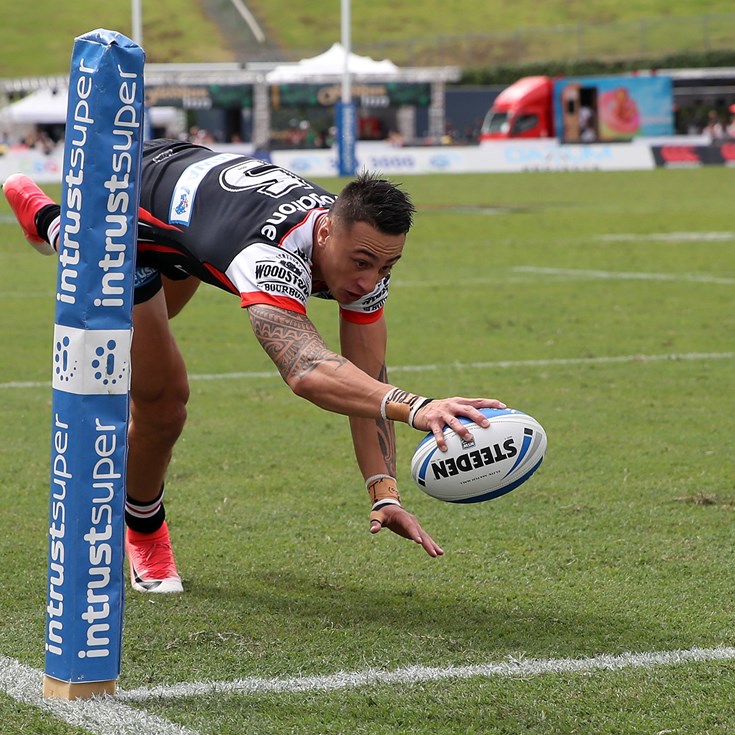