A Jordan Pereira four-try haul has played a major part in the St George Illawarra Dragons 42-12 victory against the Western Suburbs Magpies. Patrick Herbert was also outstanding for the Dragons, setting up two tries, scoring one himself while also pulling off a brilliant try-saving tackle with the game still in the balance.

Wests were just centimetres to scoring what would’ve been an outstanding opening try when Luke Garner threw a ridiculous flick pass while being tackles that landed on the chest of Gus Garzaniti who dashed to the line but was pulled down just short.

The opening 10 minutes was played exclusively at the end the Magpies were attacking but failed to post any points. When the Dragons got their first point-scoring opportunity, they capitalised with a simple try from dummy half where Josaia Lovudua sold a massive dummy to his right and crashed over.

An incorrect play the ball deep in the Magpies’ half gave the Dragons another shot, and they capitalised when stand-in fullback Herbert put in a perfect grubber towards the left wing, and Pereira jumped on the ball to take the lead out to double digits.

Wests were further hampered when young-gun Garzaniti went up the tunnel with a suspected dislocated shoulder, ending his afternoon and possibly short-term playing hopes. They desperately needed to score next, and thankfully Luke Garner stepped up by running a perfect line onto a Braden Robson short-ball to stroll over untouched.

Reuben Garrick has a bag of tricks that has seen him represent NSW in junior Origin games in recent years, and he pulled one of them out at the stroke of half-time. Dashing down the left sideline and only a blade of grass separating his boot from the line, he threw a crazy flick pass onto the chest of Pereira who finished the try with ease.

The Dragons began the second half on the front foot after a sideline-to-sideline shift created space, and Jack Payne was about to pierce through before sprinting at full pelt to the line to increase their lead to 22-6.

Lucas Price then found space for the Magpies from deep inside their half, but the chase from Herbert was inspirational as he made solid contact before bundling him into touch. Herbert’s best play of the day however came shortly afterwards, throwing a beautiful pinpoint pass for Pereira to complete his hat-trick.

Garrick scored a well-deserved try with just over 10 minutes to go to push the result beyond doubt which once again came off the back of some great second-phase play, before Herbert capped off his stellar afternoon with a well deserved long-range try for himself.

The Dragons - and Pereira - weren't done yet however, with the winger racing down the eastern touch line to score his fourth. Having come back around to make the conversion attempt easier for Field, the five-eighth made no mistake from in front, finalising the Dragons' 42 points.

As a late consolation for the Magpies, centre Tony Tali came up with an offload to send Lucas Price over at the death, wrapping up the eventual 42-12 score line. 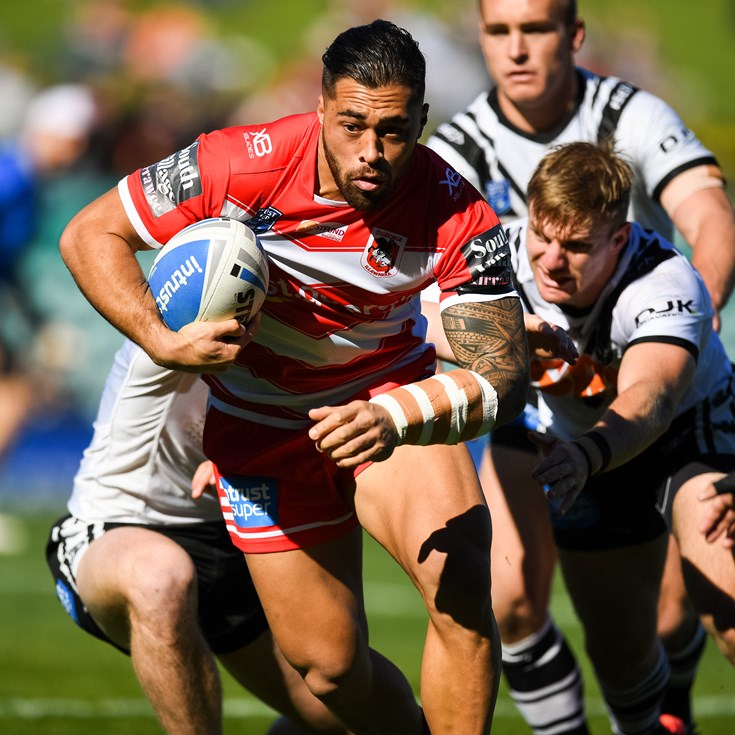 Dragons Pile on the Points in Kogarah