A stunning first-half onslaught powered the North Sydney Bears to a crushing 44-22 win over the Wyong Roos at Morry Breen Oval this afternoon (30 June).

Halfback Dean Hawkins was outstanding for North Sydney, setting up multiple tries with his boot and pulling the strings with aplomb. The Bears' forward pack were also fantastic, dominating from the outset.

The result marks Wyong's only loss since round 11, leaving last year's grand finalists teetering in ninth place, while the Bears jump to 10th position.

North Sydney registered first points of the afternoon in the 8th minute when centre Tarquinn Butler pounced on a grubber. Hawkins converted the try to give the Bears a 6-nil advantage.

It wasn't long before they scored again. The Bears launched a towering bomb, from which their chasers were able to tap the ball backwards. It fortuitously landed with Butler who motored across the line for his double.

The conversion was successful and North Sydney had a commanding buffer.

Hawkins' kicking game continued to cause Wyong headaches following the restart; this time a pin-point punt sat beautifully in the in-goal area to gain the Bears a repeat set.

The pressure proved too much for the Roos' defence to withstand, as Bears five-eighth Connor Tracey sliced through from close range. Hawkins added the extra two points to put the visitors ahead by 18.

Just when it looked like the Roos had earned a reprieve, a mistake in their 'red-zone' handed possession back to North Sydney. It would prove costly, with Bears winger Curtis Johnson scoring off a nifty grubber from Mawene Hiroti.

And the tries kept coming. Jesse Arthurs got onto the scoresheet following a short-side raid down the right edge. Hawkins was on target with the conversion, pushing North Sydney's lead to 28.

Wyong managed to bring some joy to the passionate supporters that turned out, with left winger Nick O'Meley touching down minutes before halftime.

But the Bears began the second stanza much like they did the first. Another inch-perfect grubber from Hawkins allowed Tracey to snare his brace, ending any chance of a Wyong comeback in the process.

Scintillating play then gave North Sydney another converted try. Fullback Viliami Kaveinga made a long break from well within his own half and offloaded to Hiroti for a fantastic four-pointer.

Next it was Ky Rodwell's turn to snatch a try, proving too strong for the tired Wyong defence. Hawkins nailed his sixth conversion to put the Bears ahead by 40.

Brendan Frei salvaged some pride for the Roos when he crashed over, before O'Meley completed his double to add further respectability to the score-line.

Wyong speedster Reece Robinson plucked an errant North Sydney pass out of the air on his own line and dashed 90 metres untouched, as the home side sustained a mini-revival.

Brad Keighran kicked his third goal, reducing the margin to 22 – the way it would stay until the final hooter.

The Bears take on Blacktown next weekend in round 17 of the Intrust Super Premiership NSW, while the Roos will enjoy the bye. 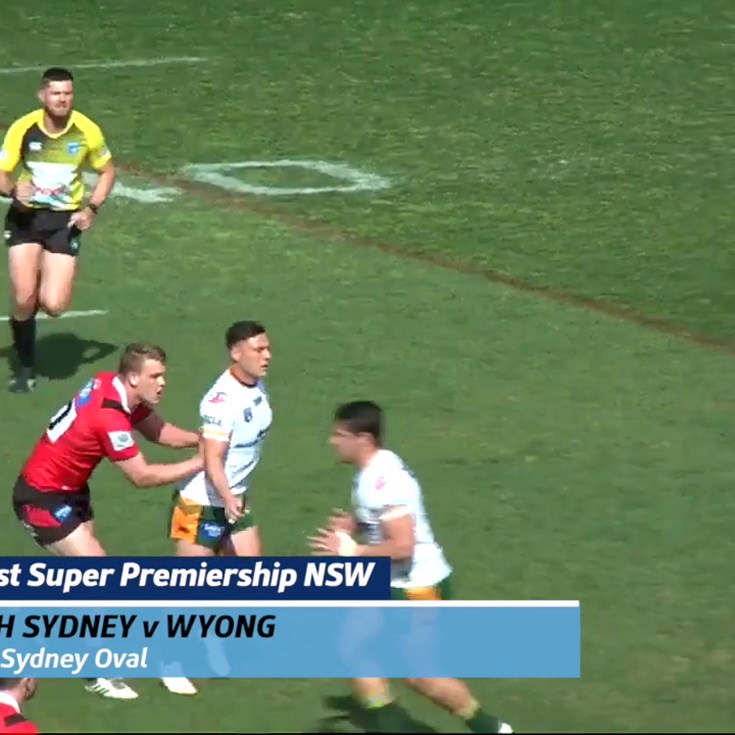 Bears Too Strong for Roos