St Marys have earned their place in the Ron Massey Cup Grand Final with a clinical attacking performance helping them to a 34-20 victory over Cabramatta on Saturday evening.

In a high-scoring affair, a total of nine tries were scored in an enthralling 80 minutes of Rugby League, with St Marys halves Jake Toby and Lazarus Brown proving instrumental while Cabramatta hooker Jesse Martin starred with two tries.

But it was the relentless first-half display from St Marys that saw them score four unanswered tries in the opening 20 minutes, before Cabramatta hit-back with two rapid-fire tries which reduced the deficit to just 12 points at half-time.

But while Cabramatta would fire with an early try in the second-half, their efforts were to no avail as St Marys held on for a 14-point victory.

Allan Fitzgibbon continued his sparkling form when he scored the firs try of the afternoon in the first minute of play, before Toby scored back-to-back tries – his first off a pinpoint banana kick from Lazarus Brown.

Toby scored his second when he burst onto a well-timed offload from Reece Goldsmith in the 11th minute, before a Brown 40/20 gifted his side a golden opportunity to extend their lead with Blake McDermott setting a 20-0 scoreline in the ensuing set of six.

Cabramatta were battling to earn valuable field position as the St Marys forward pack continued to dominate the middle-third, but they would eventually find a breakthrough when Kenny Niko found open space with a dynamic run for his sides first try of the afternoon.

And they would capitalise on their wave of momentum in the period following, with John Faiumu providing a brilliant offload for Jesse Martin who crossed for back-to-back tries in just three minutes.

But while they were brimming with confidence for a short period, St Marys hit-back with a try Robert Vai before a Toby penalty goal on the half-time siren gave them a 26-14 buffer.

It was a blistering start from Cabramatta in the second-half when Martin barged his way over from close-range for his second try of the contest, but their short burst of domination was again short-lived when Brown finished off a Toby bust by slicing through for a try under the uprights.

Both sides were unable to do any further damage to the scoreboard, although Fitzgibbon came close to scoring with a miraculous put-down in the right-hand corner in the dying stages.

St Marys will now await the result of tomorrow's Preliminary Final clash between Wentworthville Magpies and the Glebe-Burwood Wolves to determine their opponents in next weeks Grand Final.

The Wentworthville Magpies have stormed into their second consecutive Grand Final with a 78th minute try from Blake Cook giving them a thrilling 24-22 victory over Glebe-Burwood Wolves on Sunday afternoon.

The game was full of momentum swings with Wentworthville racing out to a 16-0 lead with three unanswered tries in the first 13 minutes of play, before the Wolves responded with three consecutive tries of their own in the latter stages of the first-half.

But while they snatched the lead for a short period in the second-half, and despite scoring five tries to four throughout the game, the match-winning try from Cook in the dying stages setting up an enticing Grand Final showdown with St Marys next weekend.

The match was no short of controversy, however, with a total of four sin-bins throughout the fierce encounter, including two from Glebe-Burwood in the final two minutes when a melee sparked after the Cook try.

Zach Nicholls gave his side a blistering start when he overcame an early kick out on the full – a dynamic solo effort helping him beat three defenders on his way to the try line.

And they would extend their lead through Joshua Minhinnick when a series of offloads found the unmarked winger in the right-hand corner, before Carl Winterstein crashed his way over from close-range to give them an early 16-point advantage.

Glebe-Burwood would hit-back in emphatic style, however, with their first the result of a well-executed backline movement which saw Charlton Schaafhausen produce an athletic finish in the right-hand corner, before Ryan King sliced through some flimsy defence just eight minutes later.

With just two minutes remaining in the first-half, a desperate chase from Nicholls proved costly when he was sin-binned for a professional foul,  with the Wolves capitalising on the one-man advantage when Addison Demetriou crashed over on the ensuing set.

But their failure to convert any of their tries proved costly with the Magpies holding onto a 16-12 lead at half-time.

A Tyla Tamou intercept try gave the Wolves the perfect start in the second stanza with the Demetriou conversion bolstering them to the lead, with a a brutal period of play following as both sides attempted to dominate physically.

A Beau Henry penalty goal eventually had the game levelled at 18-all with 25 minutes remaining, before Penani Manumalealii was sin-binned for a professional foul just three minutes later.

But their resilient defensive efforts proved unbreakable when they held out countless attacking raids from the Magpies, and they would eventually be rewarded when Schaafhausen finished off another slick backline movement to regain the lead with just 10 minutes to go.

But the Magpies would leave it until the hallowing moments of full-time to seal the victory, with a powerful surge from Cook gifting them their second consecutive Grand Final berth. 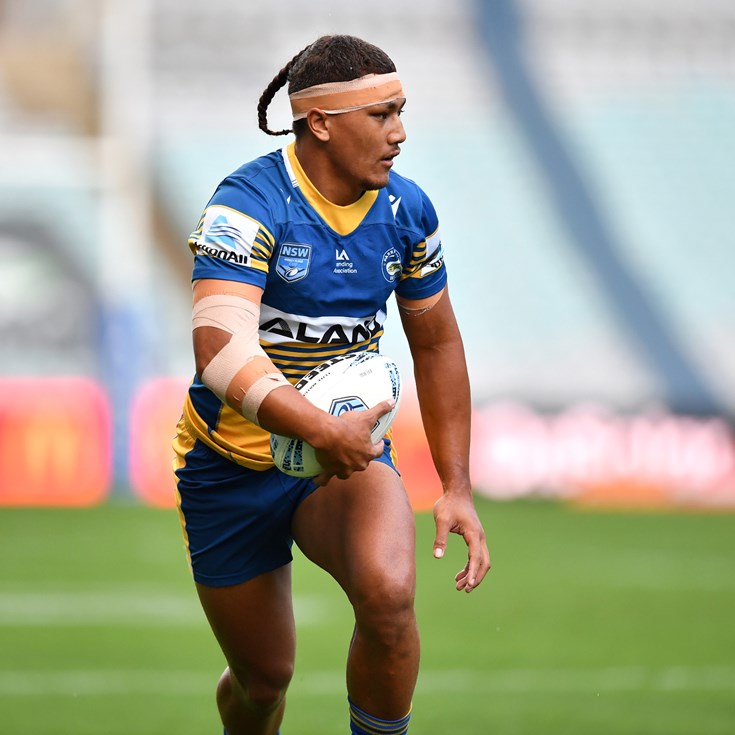