It's an oft-used cliché, but 2018 really was a rollercoaster for one of Australia’s most recognised female rugby league players, Maddie Studdon.

The highlight definitely came in June when she was selected to captain NSW in the inaugural Women's State of Origin in June.

The Blues were victorious that night, defeating Queensland 16-12 and when Maddie held up that shield in front of more than 9000 people at North Sydney Oval it was a dream come true; the cherry on top for what had been one of the best weeks of her life.

That night was a moment in time for women's rugby league but also sparked plenty of conversation about the women's game. Should it be standalone or played before the men’s State of Origin series? Why don't the women have a three-game series like the men?

What they want is a standalone State of Origin, because the game is worthy of it and to keep it as a single game with the aim of moving to a three-game series in the future to ensure the women competing are able to balance their commitments on and off the field.

But the remainder of Maddie's year didn't go as planned. She was selected to be part of the Sydney Roosters' Holden Women's Premiership side along with other big names like Karina Brown, Vanessa Foliaki and Ruan Sims. Many predicted this team would win the title.

However, the Roosters started their season off with two losses and Maddie learnt she was not an automatic selection each week, spending some games on the bench. For someone that had already represented her state and her country this would have been exceptionally difficult.

Another blow was missing out on the Australian Jillaroos squad against the Kiwi Ferns in October. While devastated to miss out, it was a bittersweet moment given it demonstrated how much talent there is in the women's game and how tight competition is for spots in the national team.

Maddie recognises there is now plenty of talent out there which means that for the current crop of Australian representatives "we have to keep on top of our game and work even harder".

But 2019 is a new year and Maddie has a fresh start, joining the Cronulla Sharks for the Harvey Norman NSW Women's Premiership which kicks off this weekend.

This is the first time that the Sharks have fielded a team (taking over the Cronulla Caringbah team) and Maddie joins a squad featuring women like Corban McGregor, Ruan Sims and Georgie Brooker.

The team is coached by Glenn Brailey (father of Sharks duo Jayden and Blake) and according to many of the players, this is the toughest pre-season they have ever had.

Last year in the same competition, Maddie played for South Sydney. While she enjoyed her time there and is still very close to many of the women that she played with there, Maddie acknowledges she spent a lot of time towards the end of the season in more of a coaching role.

With her focus more on coaching, Maddie, in her own words, "lost her game."

This probably helps explain her dip in form towards the end of last season and resulted in some challenging conversations with Jillaroos coach Brad Donald where Maddie had to admit that her performances hadn’t been quite right.

But after some time away during the off-season, Maddie is excited about the year ahead and ready to rip in to what is looking like what will be a very tightly contested competition.

There are 11 teams in this year's Harvey Norman Women's Premiership which is the most the competition has ever had including new teams like the Wests Tigers, St Mary's and Cronulla.

For teams like the Sharks and Tigers, entering teams into this competition makes their intentions clear; they want a team in the NRLW.

But what is most pleasing about the competition is if you look at the squads, there is clear evidence the pathway system is working.

Take Rikeya Horne. This will be her second year with Cabramatta after coming from the Illawarra competition last year. Rikeya is a product of the Tarsha Gale competition and was part of the St George Illawarra Dragons squad in the NRLW.

Or Maddie's partner in the halves at the Sharks, Quincy Dodd. She also came through the Tarsha Gale competition, played in this year's All Stars game and, according to Maddie, is a "little superstar".

All teams will play each other once and there will be breaks throughout the competition for the Women's National Championships and State of Origin.

With players throughout the competition like Caitlin Moran, Simaima Taufa, Isabelle Kelly, Talesha Quinn, Ruan Sims, Bec Young and Elliana Walton, I'm hard-pressed to pick a premier. But knowing how determined Maddie is to make 2019 her best season yet, I wouldn't be surprised to see her and captain Corban McGregor lift the shield at the end of the year. 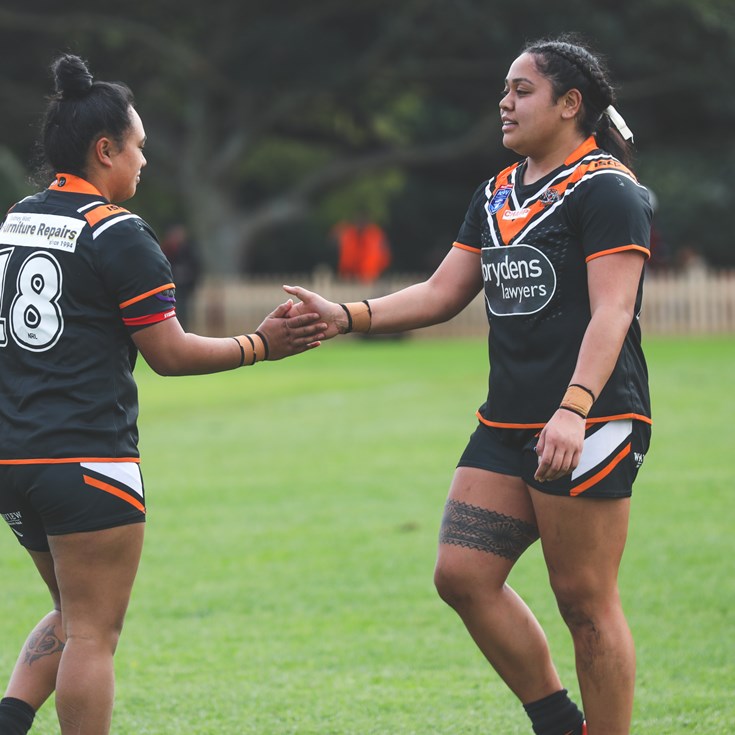 Wests Tigers on the hunt for back-to-back wins

Out of hospital, Keary cleared of serious injury but rib broken

Keary among Roosters injuries as Storm rack up big win