Trent Robinson can see a potential future at five-eighth for Latrell Mitchell but says shifting the star centre offers an "in-game" option at present rather than a long term halves replacement for Cooper Cronk.

Mitchell impressed in his last two starts alongside Luke Keary for the Roosters, and is open to a more permanent move to the scrumbase a la Greg Inglis, a player he is frequently compared to.

The 21-year-old powerhouse will trot out at centre again with Cronk back from hamstring tightness against the Broncos and will line up opposite 12-game newcomer Kotoni Staggs as he deputises for the injured James Roberts.

Mitchell's performances at pivot provides food for thought at the Tricolours, with Cooper Cronk to retire either this year or next and Keary adapting seamlessly to halfback when needed.

Robinson was circumspect when asked if Mitchell could claim the red, white and blue No.6 jumper once Cronk wraps up, but can see merit in the idea.

"It offers us an option in-game, that's what it does at the moment," Robinson said.

"He's started at five-eighth in the last two weeks and we've had good performances, so that's a great start to that second role for him … Latrell has the skill-set for me to play three positions, otherwise we wouldn't have put him in that position at five-eighth.

"He's a natural centre as you can see. He's played representative games for NSW, played for us and Australia.

"He's played a lot of fullback, more fullback than any other position and he adapted well to the five-eighth role so I think they're the three positions that he can play... He's a genuine centre/fullback who can adapt to five-eighth if he likes."

Mitchell comes off contract in 2020, and so can entertain formal offers from rivals as of November 1.

He is more than happy at both centre and Bondi, and ranks as the premiers' foremost retention priority.

But having trained throughout the summer in the halves for the exact injury scenario confronted by the Roosters, the NSW and Test centre may also entertain a more permanent switch down the line.

"I'd definitely like to play there in the future," Mitchell told Big League after last week's win over Parramatta.

"Looking at my career over the next couple of years, learning the five-eighth position and playing there is going to be a big part of it going forward."

Robinson refused to be drawn on the Roosters' interest in off-contract Bronco Tevita Pangai, but did not deny the Tongan forward had been discussed internally either.

Pangai's future has been much discussed both sides of the Tweed after a phenomenal display against the Cowboys and an underwhelming follow-up in last week's loss to the Dragons.

Every try from Round 3

The Roosters coach said his own forwards would look to physically rumble the up and coming Brisbane pack rather than target an individual like Pangai or returning prop Matt Lodge.

"You can talk about individual players and we know how we want to play... You don't change each week for an opposition," Robinson said.

"You get your game ready to go and you play your style.

"We will be physical. They've obviously got the way that they attack and we know how we want to defend.

"We want improvement on what we've been putting out there... Individually you've got to bring your game and I expect that from the guys, and also collectively you put that together and we want to go after them." 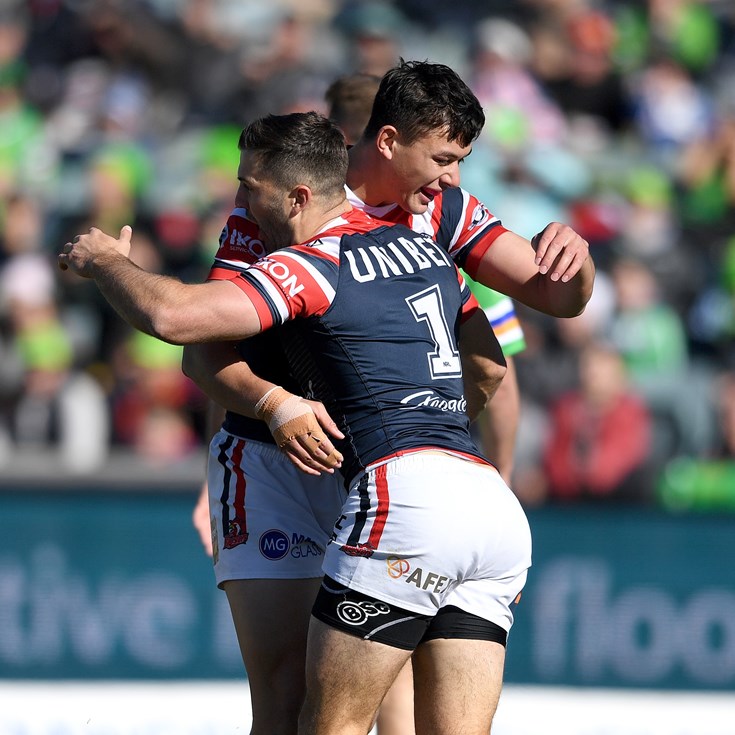 Cook maintains Walker round one banter above board