Brad Fittler has put the onus on Wednesday's Origin officials to penalise any grubby tactics rather than have his NSW players retaliate to perceived late shots from Queensland.

Blues five-eighth James Maloney was vocal in his criticism of the Maroons off-the-ball hits during Origin II in Perth, singling out tackles from Felise Kaufusi on Boyd Cordner and Will Chambers on James Tedesco as infringements "that get pulled up every day of the week," yet went unpenalised in NSW's 38-6 win.

Maloney too was cleaned up late in a Josh McGuire tackle that had Fittler on the warpath and the Maroons enforcer suspended for one match.

The veteran playmaker subsequently vowed the Blues "won't sit back and let them try and bully us … if that's how they want to play we'll play it " in Wednesday's series decider.

But with whistleblowers Gerard Sutton (lead referee) and Ashley Klein (assistant) being retained for the final chapter of the series, Fittler urged officials to tighten up their policing of off-the-ball tackles.

"I hope the referees are on top of that sort of stuff,” Fittler said on Sunday.

"I tell my players nothing. They just go out and play.

"The game has got rules and as long as we referee within the rules then players won’t be able to defend like that.

"We hope that the referees will look after that sort of behaviour.

"I didn’t really see the tackle [from McGuire on Maloney] until later and he got suspended, so obviously it needed a penalty."

The Blues reassembled at the Olympic precinct on Sunday after breaking camp for the weekend.

Knights on the trail of the holy grail

While Fittler deflected questions of who will take the lead role between halves Maloney and Mitchell Pearce, the latter received a glowing endorsement from Queensland champion Cameron Smith.

The long-time Maroons skipper helped inflict as much pain as any Queenslander in Pearce's 18-Origin career without a series win.

But Smith was all praise when asked about the NSW playmaker's looming return to the sky-blue jersey, declaring Pearce the NRL's best halfback of 2019 and backing him for a strong performance at ANZ Stadium.

"I am a fan of Mitchell Pearce. I think he is the form halfback of the comp," Smith said.

"Without those little niggles he had before the first two games I think he should have been there.

"I am sure he has copped a fair bit in his first Origin stint so he will be out for some revenge for sure.

"He will play well, he is in great form, he is obviously very confident, he is a bit older and more mature now. He knows how to handle those big games so I am sure he will play well." 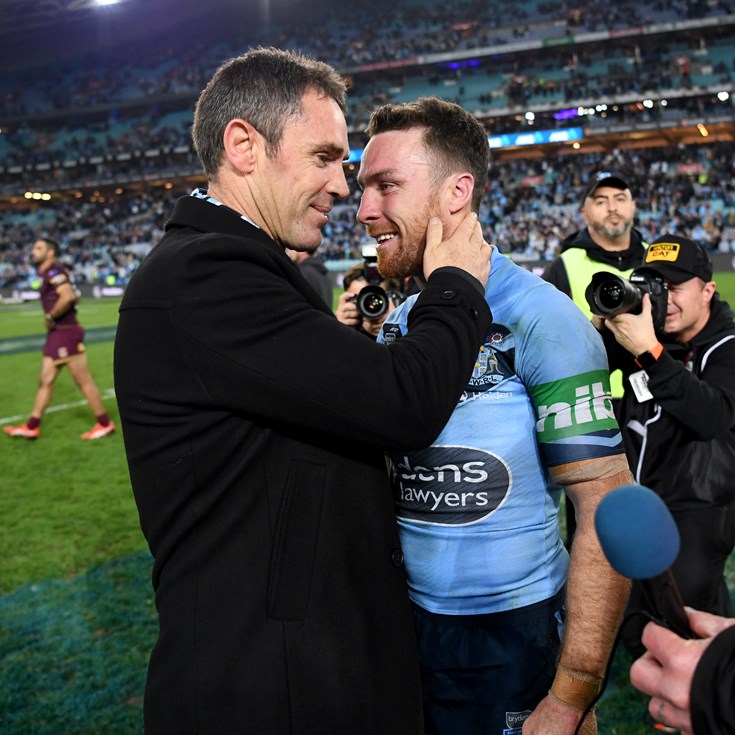 Maloney fired up for Origin recall