Cameron McInnes tried not too look too forlorn as he sat on the sidelines of the Maitland Sports Ground with his left leg in a full brace.

He watched Joe Lovodua and Billy Brittain share the dummy-half duties against the Knights in their NRL trial game, won handsomely by the Dragons 38-12.

"I don't want to be injured – no one does – but that's footy and I've been pretty lucky the last few years with none," McInnes told NRL.com.

"I guess it's my time now to experience a bit of that. I'll be OK. I'm already into rehab but the time frame is out of my control.

"I'll just do everything I'm told to do. Watching the boys today I was itching to be out there. But at the same time my head is in a good place.

"This is a challenge for me – this type of leg injury – that I've never really had but I'm interested to see how I respond to it."

The time frame is 6-12 weeks for his medial ligament damage suffered in Perth at the NRL Nines.

With three weeks to the round-one game at Wollongong against Wests Tigers, McInnes could miss at least the first month of the 2020 campaign.

"The quicker I can keep strengthening it the better. I'll be doing everything I can."

And that includes hobbling onto the team bus bound for a camp in Mudgee before the Charity Shield match against the Rabbitohs on Saturday night.

McInnes would rather be with the team physios and other medical staff than home on his own.

The extended time away will help nail down the players' attitude towards the ongoing Jack de Belin court case.

Paul McGregor is keen to ensure the delays in the legal case being resolved do not affect the Dragons' season.

He was almost smiling after the Dragons thumping win over the Knights in Maitland. They put on seven tries to two, showed depth in their Canterbury Cup and development players, and didn't pick up any more injuries.

"It's a fitting way to finish [pre-season] with a week-long football camp," McGregor said.

"We will cross off a lot of things during the week around driving our culture, behavioural standards, and just generally getting together.

"We didn't have a camp earlier with people away [on international duty] so we knuckled down and did a tough 14 weeks and this is the back end of it."

Watching Lovodua and Brittain, who is on a train-and-trial contract for a month, strut their stuff eased McInnes's mind a little more.

"Joey looked great out there. He's been working really hard so it's showing some depth. As a club we'll be fine – they won't miss me too much," McInnes said.

They will – but they do get international hooker Issac Luke back on a high from the Maori All Stars' win to play his old club.

"Billy Brittain played well too when he came one. He straightened us up, nice service, and good defensive work," McGregor said.

"So he's had a full pre-season at No.9 even though he hasn't played much football there.

"But Bully [Luke] will go into the No.9 and will be comfortable there – he's played 250-odd games there. He comes into camp on Sunday so he's with us the whole eight days."

The other query put to McGregor was the future of his Test back-rower Tyson Frizell. He is off contract in 2020 and already Newcastle rep players Mitchell Pearce and David Klemmer have called on him to join the Knights.

"The only thing I'll say is that he's got my support mate – whatever his decision is," McGregor said. 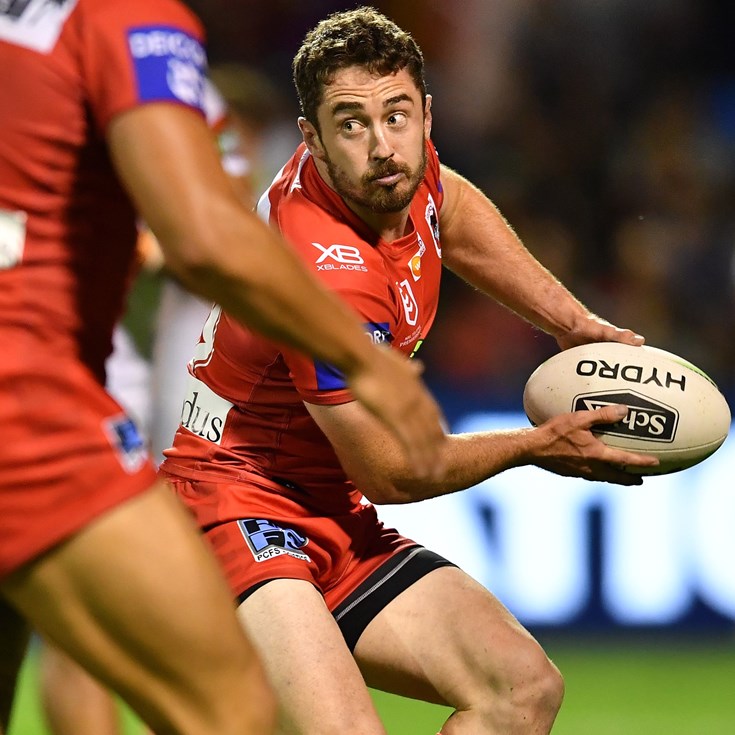 Clune will shrug off broken nose to make Dragons debut

Frizell addresses talk about his future