Cronulla have reluctantly agreed to release Josh Morris after round 2 with the hope of securing rising Roosters prop Poasa Faamausili in return.

A relieved Morris on Wednesday declared "I owe it to the boys" to perform strongly for the Sharks before reuniting with twin brother Brett after Cronulla's March 21 match against Melbourne.

The Roosters will pay a transfer fee - understood to be worth $40,000 - which will help Cronulla manage a tight salary cap, while the delayed release is also hoped to coincide with an easing of the Sharks backline injury crisis.

"I'm here for two weeks and I'm going to give the best account of myself as possible," said Morris, who has been named at left centre for the Sharks' season-opener against Souths on Saturday.

"I want to set them up for a good start to the season and if I'm doing my job well then hopefully we can get a couple of wins."

Faamausili is yet to speak with Cronulla officials, but has been granted permission to do so by the Roosters as the Sharks look to beef up their front-row stocks.

It’s understood the young Kiwi forward, who re-signed with the Roosters last year until the end of 2022, is one of several players offered up by the premiers in order to secure Morris to fill the void left by Latrell Mitchell’s departure and Billy Smith’s ACL rupture.

NRL.com understands that if Faamausili were to sign with the Sharks it would not be under any loan agreement, with Cronulla unwilling to entertain sending any player off again at the end of 2020.

The Sharks had at first been reluctant to have Morris line up against them, with an initial release date of early April set to follow their round five clash against the Roosters.

But the fast-tracked move will add further fuel to the growing rivalry between the club with Morris and ex-junior Kyle Flanagan now both due back at Netstrata Jubilee Stadium on April 11 in red, white and blue.

Morris is grateful to have the chance to finish his career playing outside sibling Brett. The siblings started out together at the Dragons before Josh was pushed to the Bulldogs in 2009, with Brett eventually following six years later.

The pair are set to join forces again in the Tricolours' bumper round three clash against arch-rivals South Sydney and Mitchell.

"I guess it's something as kids we dreamt about, playing in the NRL together, playing our whole careers together and being able to walk off the field together at the same time," Morris said.

"We probably thought that dream had ended when we signed at different clubs [after leaving the Bulldogs].

"There are a lot of things that have happened for this to even happen. Football can work in weird ways sometimes.

"I'm excited about being able to link up alongside him again, but that's not my focus right now."

He added that learning the Roosters' structures so quickly will be his biggest challenge in making the move.

The return of fellow outside back Jesse Ramien this season had also been reported as a reason for Morris wanting out of the Shire.

The veteran didn't deny it was frustrating but he accepted the logic behind coach John Morris signing Ramien from Newcastle.

"As a centre, you're I guess unhappy that someone else has been bought in your position," Josh Morris said.

"But Bomber [coach Morris] has got a job to do and he's got to plan for the future and I understand that as well because it is a business."

Morris, who finished as Cronulla's top try-scorer in 2019, said it had been an "enjoyable" period in black, white and blue and believes he leaves the club in a great position.

"There are some great youngsters coming through as we saw in the trials," Morris said.

"No doubt they'll get a start at some stage this year – Bomber handed six debuts out last year, he's not afraid to blood a rookie."

Josh Dugan (knee) continued his return to full training on Wednesday, running at fullback in their team session, with the hope of making a comeback by the end of the month.

Teenage centre Bronson Xerri is aiming to return in the next fortnight. 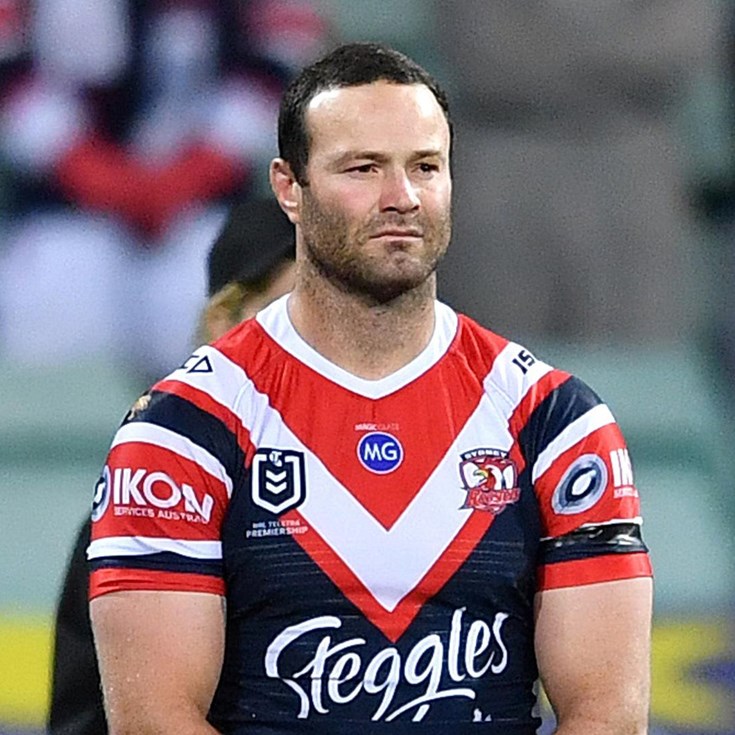