Josh Morris' quest for an NRL premiership ring may finally be achieved with the club he almost signed with more than a decade ago.

After being squeezed out of St George Illawarra ahead of Wayne Bennett's arrival in 2009, Morris's dream of finals glory is within sight.

Before that, the man who is the 17th highest try scorer in premiership history will become just the 41st player to reach the milestone of 300 matches in Canberra on Saturday night.

His ranking on the try scorer's list could end up inside the top 10 thanks to him recently agreeing to another season with the Roosters in 2021.

Besides his 145 tries, Morris has been a State of Origin hero for NSW and was a member of Australia's 2013 World Cup-winning team but unlike twin Brett, he is yet to win a grand final after leaving the Dragons before their 2010 triumph.

Regarded at the time by Bennett as a winger, as he had played just nine of his 46 NRL appearances for the Dragons in the centres, Morris almost joined the Roosters in 2009 under the coaching of club great Brad Fittler.

"He and his brother always looked good," Fittler said. "Everyone was always interested. Josh was extremely capable and he was always looking to get better."

After 10 seasons with Canterbury and 18 months at Cronulla, he is now a key member of the Roosters bid to become the first team since Parramatta (1981-83) to win three consecutive premierships after making a mid-season switch from the Sharks.

"There are a lot of forwards and some halves there, but not many outside backs," Robinson said of Morris.

"He is a specialist, he has played probably 250 of those 300 games in that position."

Morris debuted in the No.1 jersey in the opening round of the 2007 competition, which was also the Gold Coast Titans inaugural match, and he played 23 games for St George Illawarra that season at either fullback or wing.

Injuries to Matt Cooper or Mark Gasnier gave him the opportunity to play in the centres for nine matches the following season but it wasn’t until he left the Dragons that Morris established himself as one of the best centres of his generation.

"He had always been the same weight as Brett and then as soon as he started being 1kg or 2kg heavier that centre position suited him," former St George Illawarra winger Jason Nightingale said.

"He has worked very hard on the defensive side of his game and he is incredibly strong. That is something you don’t really see but once he has got a hold of you there is no getting away.

"He is a couple of kilos heavier than Brett and I were, and he is that perfect centre shape.”

"Even as kids in the under 20s they had this natural ability to save tries," Brown said. "Obviously they are outstanding at scoring tries but they probably haven’t been given enough credit for how many tries they save.

"People were saying when Josh’s time at Canterbury came to an end that his best days were behind him but he went to Cronulla and regained his Origin spot. Now he has gone to the Roosters and he is playing as good as ever."

Former St George Illawarra coach Paul McGregor was performance manager under Brown and he worked closely with the Morris twins as the Kiama Knights juniors rose through the ranks.

"I used to do a bit of skills with them," McGregor said. "They have always had great anticipation, even as kids. They just needed that hard edge which was going to take experience.

"I thought Josh was always going to make a really good centre. Even back then.

"Josh liked the defensive side of the game so he was always going to be a bit closer to the action, I thought. Brett was a different body shape, too.

Josh Morris was still one of the quickest players at the Bulldogs before leaving the club for the Sharks at the end of the 2018 season.

He played Origin last year but the 34-year-old appears to be playing with even more energy now, prompting former Canterbury team-mate Dene Halatau to ask him in a message: "Where is your fountain of youth?".

"I have marveled at the way he has continued to maintain his form, particularly because his whole game is based around being physical as a centre, being really strong defensively, having great speed and being a really good attacking player," Halatau said.

"He is taking on guys 10-to-15 years younger than him and coming out on top more often than not."

Morris spent most of his Origin career as the player chosen to nullify Maroons superstar Greg Inglis and he reveled in the responsibility.

Former team-mates say he is always confident in his ability and is a constant talker on the field.

To play the way that he has played for 300 games ... is pretty special

"Josh has got a lot of chat," Nightingale said. "He shit-talks way more than Brett."

Halatau said the way Morris shrugged off medical staff who had told him he had ruptured his ACL to chase down Inglis in the dying minutes of the opening 2014 Origin match and help NSW to a win that paved the way for their first series triumph in nine years typifies his approach to the game.

"He has just been able to sustain that high-level performance for so long," Halatau said.

"Everyone knows that he was the Greg Inglis foil. He was the guy who had the job of shutting down Greg Inglis and he never seemed overawed by it.

"It was only in 2018 the Bulldogs guys were saying to me that he was still setting the benchmark for their 40-metre sprints.

"He has got great acceleration and he will have a dirty carry out of his own end if you needed but probably defensively is what really springs to mind.

"He could lasso blokes if they get around him and he must have incredible grip strength because he would look beaten sometimes and just grab them and pull them in."

"I wished he was still here at our club. I've spoken publicly that I wanted him to stay but he's doing good things at the moment and 300 games is an incredible milestone."

The Morris brothers always wanted to play together, which is why Josh was keen to follow Brett to the Roosters when the opportunity arose mid-season and why Brett joined Josh at the Bulldogs in 2015.

However, the seven seasons they were separated also left no doubt how good the twins are individually, with Brett now equal fourth with Ettingshuasen for the most tries (165), both brothers playing 15 Origins and representing Australia.

Asked if he now considered Josh to be "one that got away" after the decision to allow him to leave in 2009, Bennett said: "I know at different times I have been blamed for it but the Dragons thought Brett was better value and they could not keep both. That was my information as told to me. I knew very little about him at the time. He has had a great career."

Nightingale said it had been a major talking point among the players at the time, as many of them advanced into first grade with the Morris twins.

McGregor said he made several attempts to re-unite Josh and Brett at the club during his seven seasons in charge.

"I wanted them both back multiple times. And they wanted to come back too," McGregor said. "I've got a really good relationship with both of them but there were obstacles put in the way each time.

"I thought it could be really good for both of them to finish their careers where it started for them, and where Brett obviously had success.

"Josh could bring the next generation of kids through. They have proved my thoughts right with the way they are playing at the moment."

Brown said it would never have been in the twins' plans to play for different clubs but now Josh was at the Roosters there was a chance for him to finally win a grand final with Brett.

"Obviously it would have been good for them to play their entire careers at the Dragons and win a comp together there but unfortunately Josh had to leave," Brown said.

"But they are back together now and it would probably be a fairytale if they could win a comp together at the Roosters this year." 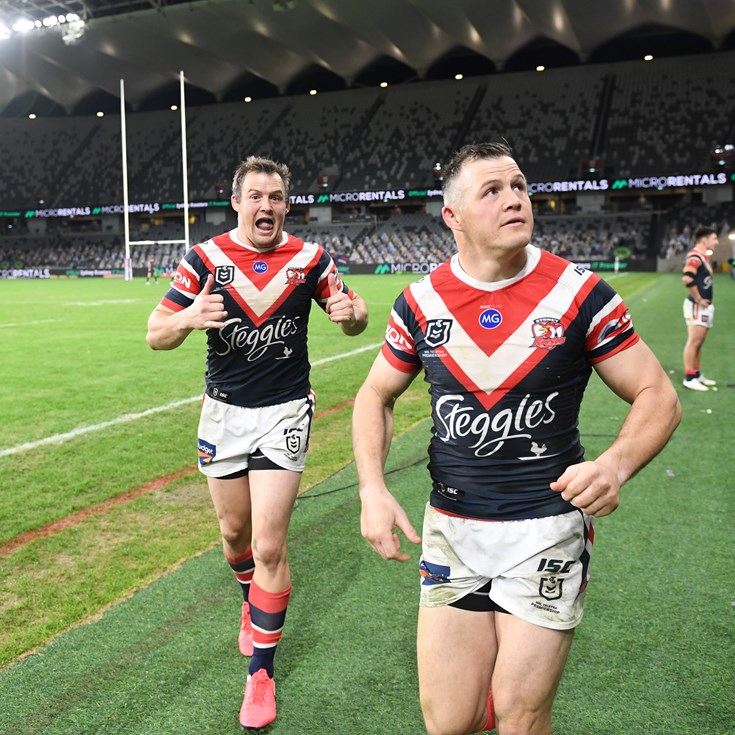 Roosters teammates push for Morris twins to stay on