The Dragons second-rower, who has played alongside Klemmer for NSW and Australia, ended speculation about his future in March by announcing he will join the Knights from 2021 on a three-year deal.

Klemmer considers it a monumental coup for the Hunter club.

"Tyson's one of the best back-rowers in the world," he said on Monday.

"For our club and Alex [McKinnon, recruitment manager] to get him over the line, it was pretty special."

Of O'Brien's influence, he added: "What Ads has done here with our culture and our footy, he's taken us to another level.

"I think Tyson can feel what Adam's about and the playing group here as well are all good blokes and good people to be around.

"He's a different sort of forward, he's got good leg-speed, very fast and he's got a bit of ball-work about him as well."

While excited about Frizell's arrival next year, Klemmer's immediate focus is preparing for the Telstra Premiership's relaunch on May 28 after a six-week break due to the coronavirus pandemic.

The front-rower is confident the Knights can maintain the momentum they built in winning their opening two games, saying the team returned to training in top condition.

"I think the whole squad was pretty good in looking after themselves," said Klemmer, who relished the chance to resume contact training on Monday.

"We had to weigh in every week [in isolation]; we had to send a photo of our weight in the WhatsApp [group], so there was no hiding.

"Everyone was pretty spot on with their weight and doing the work as well. We hold everyone accountable and we're still hungry to get back playing footy and doing good for Newcastle."

Klemmer also spoke about the potential for the competition to reboot with one referee instead of two as a cost-cutting measure.

The 26-year-old, who has played under a lone whistleblower at international level, said the boundaries can be pushed without a pocket referee.

"For Test footy, once you go back to one [ref] the main focus is slowing the ruck down and that sort of stuff because you know you can do it with one ref, test the limits there," he said.

Meanwhile, with the Canterbury Cup scrapped for the season, Newcastle forward Josh King would love for a "hybrid competition" to be set up for fringe first-graders to maintain match fitness and press their NRL claims.

One option reported is rival clubs staging trials against each other every fortnight.

"At the end of the day, it's out of all our control. We can only do what we can do and that's turn up to training each day and train hard," said King, who hasn't played NRL in 2020.

"I think at the moment they're trying to work on putting a little hybrid comp or something like that for us. Hopefully that can go through."

King, who is uncontracted beyond this year, will do whatever it takes at training or in matches to earn another deal.

"I knew this wasn't a great thing for me that all the games got cancelled, but again, there's nothing I can do but get on with it," he said.

"Just every day I'll try and do my best at training, because I guess that's what the coaches will be focusing on for some of us boys for now." 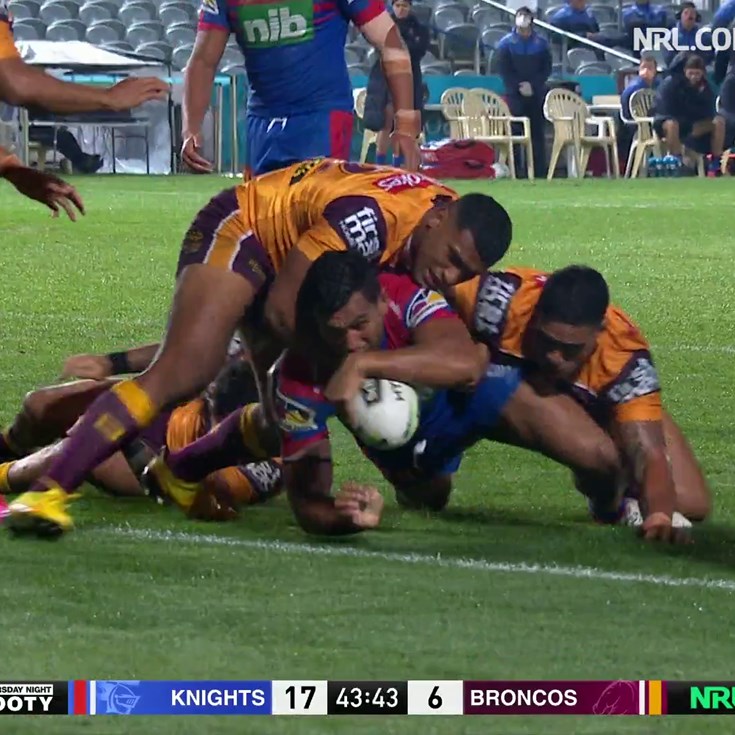 Pearce steps off the right

Hughes 'grateful' for Beanie for Brain Cancer Round

Best wins the race to a Mann kick