Having used the six-week, coronavirus-induced break to heal injuries, Wests Tigers stars Luke Brooks and Moses Mbye are ready to roll once the action restarts.

Brooks, who injured his calf the day before the club's season-opening win over the Dragons, was initially set to miss five matches but has confirmed he will be fine for round three.

"My calf is feeling good. I'm back into pretty much full training now and I'll be right for full contact [later this week] too," Brooks said.

The 2018 Dally M Halfback of the Year explained the unusual circumstances in which the injury occurred in a captain's run.

"It was sort of nothing. I sort of went to take off and pass the ball and I thought someone threw a tennis ball or a golf ball at my calf," he said.

"I turned around and looked around and I didn't see anything. Then I went to take a step and realised it was my calf that went on me.

"It was a bit of a weird one, I hadn't done a calf before, but I guess if there was a good thing to come out of all of what's happened over the past six weeks it's that I only missed two games."

Co-captain Mbye, meanwhile, was forced to watch the first two rounds as he battled a knee injury.

"I guess COVID was a bit timely for me... I'm certainly looking forward to playing some footy, it feels like it's been forever," the utility said.

"I had a long time to get my rehab right and I was fortunate enough to have access to the physio a couple of weeks early, so that was really good. They've been really good in here as well."

With clubs cleared to resume contact training on Monday, the Tigers eased their way back into tackling with left-versus-right edge drills and a light 13-on-13 scrimmage.

The players are expecting things to ramp up as the week progresses.

"It was a bit of an introduction day to it, so we didn't get into it too much," Mbye said, adding that an indoor tackling technique session was planned for that afternoon.

Bailey's Bunker: Lawrence uses own adversity to inspire others

While the team may need some time to adjust to the rigours of crashing into each other again, Corey Thompson is confident stamina won't be an issue once the Telstra Premiership resumes on May 28.

"Last week we got flogged in fitness," the fullback said.

Thompson also downplayed any major benefit the Tigers could gain if their home ground of Leichhardt Oval becomes a central venue for matches to be held amid the pandemic.

"I think the main advantage is the packed Leichhardt crowd that we usually get. It might give you a little edge, but the main factor will be missing," Thompson said, referring to fans being locked out.

Brooks noted that supporters watched from the scaffolding of a house overlooking the stadium when the Tigers hosted Newcastle in round two and joked the club could sell tickets for the view.

Mbye said his whole squad had adapted to the major shake-ups brought about by the virus.

"No one's complained 'we need a draw, we need this, that and the other', everyone's just embraced that it's going to be different this year," Mbye said when asked if it was difficult to prepare for round three without knowing their opponent yet.

"We've been thrown a couple of curveballs and that's just the way it is. Everyone's just keen to play footy and put on a product that people want to watch. Whoever it is we play, we're just going to prepare the best we can."

Mbye put his trust in the Project Apollo innovations committee to make a smart call regarding any rule tweaks.

It's been touted that the game could reboot under a one-referee model where teams would receive a new set of six instead of a standard penalty if the opposition commits a ruck infringement.

"I think that the committee that's going to make these decisions, they've got some really good brains and really good experience around the football field in there," Mbye said.

"I think they'll be mindful of changing the rules at this time of year, in terms of it's mid-season. We can't forget that it is mid-season, we're going into round three.

"I think as far as rule changes go, they fit better at the end of the year or in the off-season going into next year." 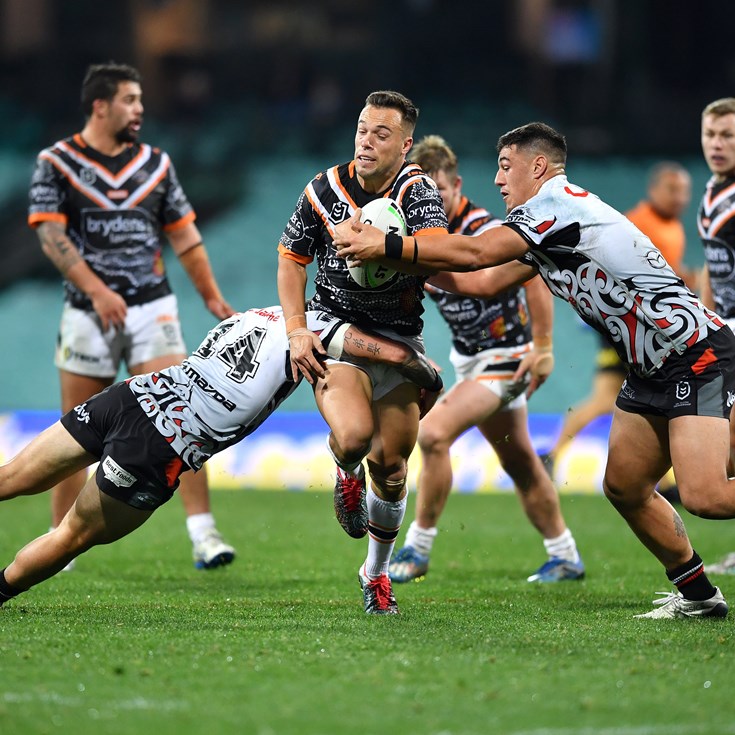 Brooks itching to reclaim No.7 jersey

Brooks Happy To Be Mentioned As Origin Candidate