Out-of-favour Wests Tigers playmaker Luke Brooks is itching for a return to the starting side after experiencing the first major demotion of his career.

Restricted to 76 minutes off the bench in his past three appearances, Brooks has found himself in new territory watching on from the sidelines before attempting to provide impact late in games.

Michael Maguire is likely to make changes ahead of the side's clash against Newcastle after a below-par effort in the loss to the Warriors on Friday night.

Maguire has plenty of squad depth at his disposal as he seeks a similar response to the bounce back from a poor loss to the Titans in round four.

Brooks, the 2019 Dally M halfback of the year, has found it tough to spark the side over the past fortnight in matches that have gone down to the wire.

Every try from round 12

"I'm not the first person to be dropped and it won't be the last. We're still playing, so I've just got to do my bit when I get on the field.

"It is hard, especially for a half to come in with limited opportunities you get with 20 minutes to go.

"It's what it is, I've just got to do something when I'm out there."

Asked if his recent demotion from the starting 13 was the wake-up call he required, Brooks conceded there were areas in his game that needed improvement.

"I probably wasn't happy with how I was playing," Brooks said.

"It's a good chance for me to look at my game and see what I can do to improve my game and get back in the starting side.

"A bit more consistency for me and just building that game plan and building pressure and stuff like that for me to get back in.

"Just working on stuff at training and you can go from there."

Experienced halves Benji Marshall and Josh Reynolds have provided Brooks with encouragement during the uncertain period.

Leilua gets an offload to Mbye

"If you look at when Benji got dropped and he got back in the side. You can take a bit from how he handled himself as well," Brooks said.

"They've both been through that. It's good to have them there helping me out. I've just got to keep doing my thing at training and get back into the side." 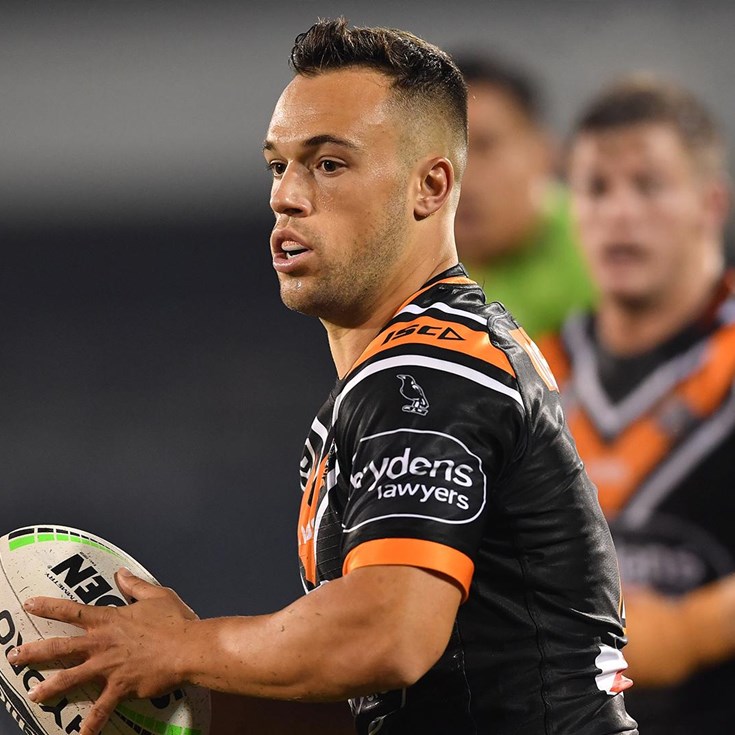 Brooks, Mbye fit and raring to go as re-start looms

Brooks Happy To Be Mentioned As Origin Candidate