The Dragons duo and former Parramatta winger Bevan French, who now plays for Wigan, became friends after spending a week each being billeted by the families of the other two while in primary school.

Dufty, a St George product, and Clune, who played juniors for Albion Park-Oak Flats on the South Coast, have remained in close contact since and played together in the Dragons under 20s team.

However, they only got to play alongside each other at NRL level for the first time two weeks ago when Dufty was recalled to the starting side against Cronulla and were also in the team that beat Gold Coast last Saturday.

Get Caught Up: Round 6

“It has gone past footy. It is great to do that with someone you have known for so long and we know each other’s game inside out and it has been really easy to transition into first grade with the amount of footy we have played together.”

With St George Illawarra losing their first three matches of the season, Dufty was dropped by coach Paul McGregor to make way for Clune in a reshuffled backline against Canterbury.

Another loss prompted his recall to the fullback role with Ben Hunt shifting to the interchange bench and it has proved to be a winning combination.

Dufty said the increased speed of the game created by the new six-again rule suited his game.

“We have changed our attacking structure a little bit the last couple of weeks and it is a lot more suited to the style I like to play,” he said.

“Playing that footy that’s on the up and everyone pushing around the ball, and there is a lot more space instead of playing that more structured style of footy, it just suits me better and I have been playing better too.

“Consistency has always been a big thing for me and when I get involved in the game I tend to play a lot better than waiting for the ball to come to me.

“That’s what the coaches have been big on lately, just getting me involved so that I am there for the whole 80 minutes and there every week.”

Zac Lomax, who started the season at fullback but has now shifted to centre, said he was pleased to see Dufty return to his best form.

"Duff's a massive confidence player, like a lot of us are, and I'm so happy he's been able to really play some good footy these past couple of weeks," Lomax said.

"I'm super proud of him. I don't think he was the happiest with how he performed earlier in the year but the last couple of weeks he's been one of our best players.”

Lomax said he still had ambitions to wear the No.1 jersey but wanted to settle into one position now and was developing a combination with Fijian winger Mikaele Ravawala on the right edge.

With winger Jordan Pereira facing suspension, Tristan Sailor or Jason Saab are expected to be called into the Dragons team to face Sydney Roosters on Friday night at Bankwest Stadium. 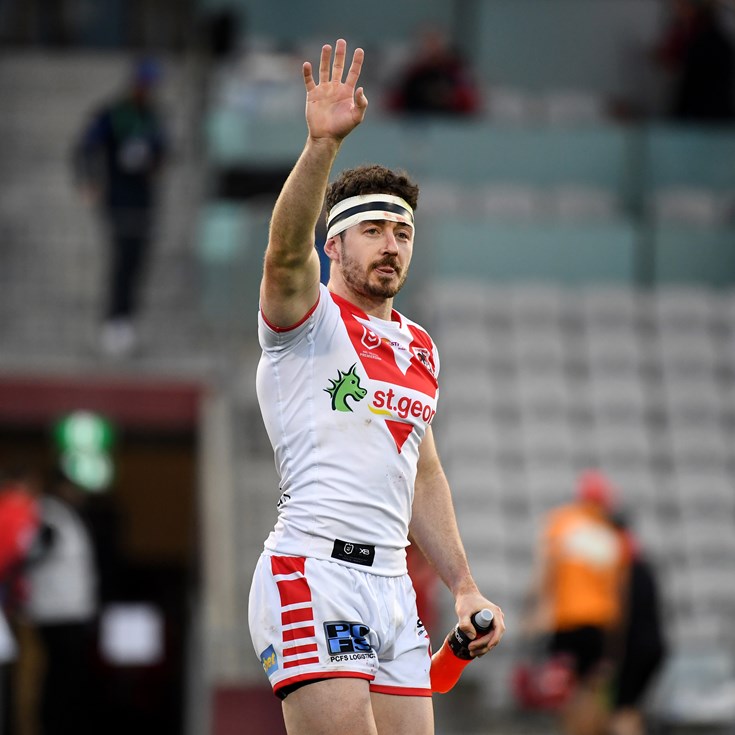