It's a rare sight when an ever-polite Jake Trbojevic is laying down the law to his Manly teammates but the forward's recent plea for change has had a lasting effect on the side's current run of form.

Recent wins over the Eels and Cowboys have pushed the Sea Eagles into eighth spot and very much back to flying under the radar in 2020 – just as coach Des Hasler likes it.

It was only three weeks ago Hasler's men were reeling from a two-point loss to Newcastle that had them dropping out of the top eight.

The two-week turnaround could prove the catalyst to going on a run in the second half of the season with six of their final nine games against sides placed in the bottom half of the Telstra Premiership.

"I was walking around with a bit of a dropped lip I will admit but was a bit happier last week and really happy this week," Trbojevic said on Monday.

"After a loss, it's really tough and makes for a bad week. When you win everyone's more upbeat.

"It gives you a lot of motivation to go out and perform when you're feeling it during the week.

"I guess that's motivation in itself to perform well. We're hoping to find a bit of consistency and keep it going.

"We've done well to turn it around but need to keep working hard because everyone you play is tough."

Their round 12 opponents, Penrith, join Melbourne a fortnight later as arguably their toughest opponents in the run towards the finals.

Cust takes the line on

The competition-leading Panthers hold a dominant 10-3 record over the Sea Eagles since 2012.

"They're going to be a massive test, they're winning the competition and are the team in the best form at the moment," Trbojevic said.

"Their forward pack is playing great and outside backs unbelievable. It's a good test to see where we're at."

Sea Eagles five-eighth Dylan Walker is unlikely to be available for Hasler's men as he nears a return from an ankle injury.

However, a strong performance from back-up playmaker Cade Cust against the Cowboys could make for a possible selection dilemma down the track.

"We want [Dylan] back as soon as possible, he's a big part of our team," Trbojevic said.

"You'd probably think Dylan would come straight back in but Cade has been outstanding.

"He's got so much energy and is really confident. He takes the line on and isn't scared, has no fear.

"I think they're really good traits for a good footballer. Any time he's in the team he really lifts us." 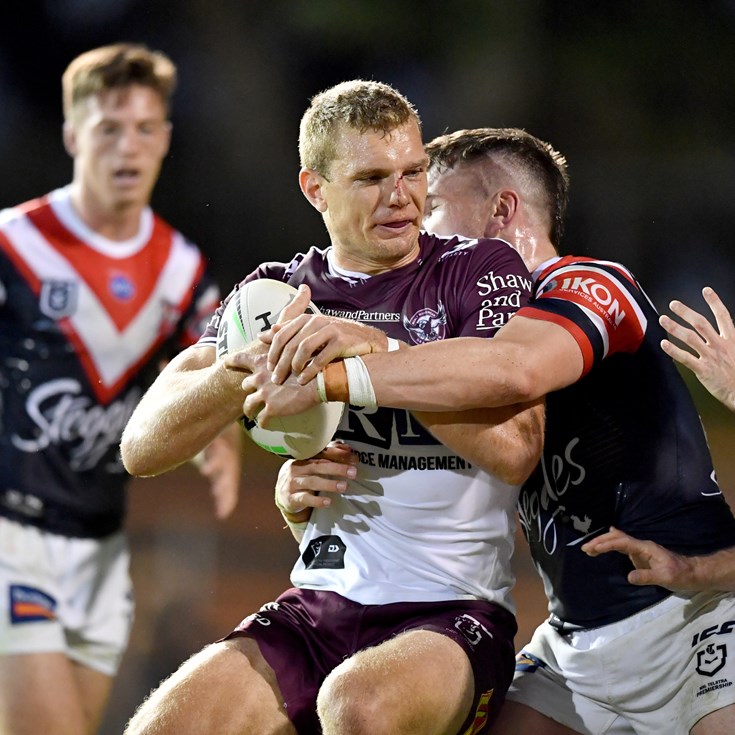