The last time the Raiders packed into the SCG sheds they were celebrating one of the most famous wins in their 38-year history.

But amongst the cheers, Nick Cotric shed a tear or two knowing that earlier that day the clock had officially started counting down on his Canberra career.

The tug-of-war for Cotric's services reached a head on the morning of their round 10 grand final rematch with the Roosters in July.

After months of negotiations the Raiders withdrew their three-year offer to the  born and bred local flyer, as the Bulldogs upped their own to just under $2 million.

Cotric took the paddock less than 12 hours later for what would prove the most cherished of lime green wins.

A 24-20 triumph with Josh Hodgson, Sia Soliola, John Bateman, Corey Horsburgh, Emre Guler, Curtis Scott and Bailey Simonsson all out injured off the back of a five-day turnaround, only for Michael Oldfield to join them in the casualty ward at half-time.

Cotric took his moment in the sheds afterwards, returned to Canberra that night and the next day, told his teammates 2020 would be his last season in lime green.

"It was that Roosters game for me and yeah, there was a bit of emotion afterwards," Cotric recalled of his biggest career call to date, ahead of a return to the SCG for another winner-take-all clash with the premiers.

"I had to keep it in check, we still had a game to play and we had to get the job done. We did that and I think I was able to put that aside then.

"It was a big decision, the biggest one I've made in my career so far. In the end it was the opportunity presented by Canterbury.

"That's how I had to approach it because it is a business.

"The boys respected my decision when I told them, these things happen in our game and you just get on with it."

Cotric is Belmore-bound in 2021 as a marquee signing for Trent Barrett's rebuild at Canterbury.

Starting with last week's sudden-death win over Cronulla, the 21-year-old knows each game could be his last in the only colours he has ever known.

"It's in the back of my mind definitely," Cotric told NRL.com.

"But I just want to do the best I can for the club and these boys while I can. It's such a great club and I owe this place plenty.

"It's a great group, I just want to do them proud on the weekend. I don't think about it too much but it does pop up about.

"Last week it was about three days before the game, 'this could be my last game'. So obviously I want to give it all I've got for this club.

"I grew up here and the club's done a lot for me. I'm just really excited for these last couple of games with these boys and this weekend is the focus."

Another date with the Roosters this Friday pits Cotric up against Daniel Tupou once more, the "awkward" tall timber who looms as a key challenger for a NSW Origin berth come November.

Cotric turns 22 on the date of game three in Brisbane but the 2019 Blues debutant is yet to give the interstate series any serious thought.

With 22 tries between Tupou and veteran centre Josh Morris (11 each) on the Roosters left edge, Cotric is expecting to have his hands full once more.

"[Tupou] is a big body, he's a tall fella and he's obviously very good in the air," Cotric said.

"He's pretty awkward to defend, he carries the ball well. It'll be a good match-up." 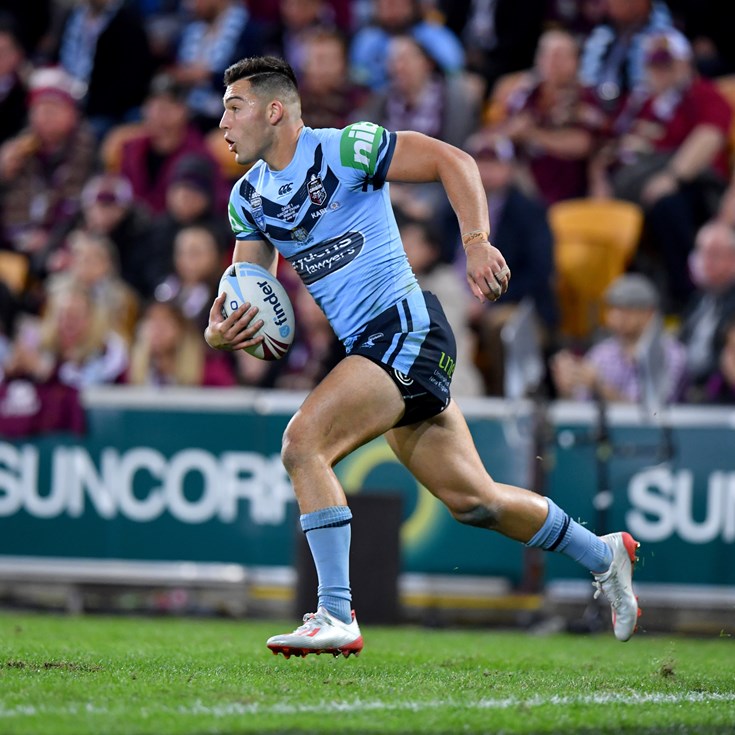