A dramatic last-gasp try and touchline conversion after the full-time siren from Warriors centre Junior Pauga has forced a 26-all draw with the Wyong Roos in a cracking Intrust Super Premiership NSW top-of-the-table showdown at Morry Breen Oval this afternoon.

In a high-quality contest that see-sawed all day, the one point secured by the Roos was enough to clinch the minor premiership as some consolation for being run down at the death, while the draw almost secures the Warriors a top-two finish ahead of the finals campaign.

In a match that certainly lived up to the billing of a clash between the top two sides on the ladder, the Warriors got off to a dreadful start when Manaia Cherrington suffered a severe concussion in attempting to tackle Wyong prop Lindsay Collins in the opening set of the match, forcing the visitors’ hooker off the field to take no further part in the match after just 90 seconds.

Warriors skipper James Bell then took over as the predominant dummy-half for the majority of the match.

Both sides then settled into the early arm wrestle with early chances at a premium – with returning Wyong half Mitch Cornish penalised for obstruction in the best of the early opportunities.

After using the stiff southerly breeze at their backs to force field position, Wyong converted that field position into points in the 19th minute when a Joseph Manu grubber kick from the right edge evaded the last line of Warriors cover – allowing Roos five-eighth Jayden Nikorima to pounce on the ball for the opening try. Cornish converted for a 6-0 Wyong lead.

The Warriors then came back hard superbly into the breeze in the back end of the first half – with Cook Islands international fullback Charnze Nicoll-Klokstad making a 50-metre break from broken play 15 minutes from half-time to get field position back for the visitors.

After the Warriors got a repeat set from a penalty on the back of the long break, Nicoll-Klokstad finished the movement off when he stepped through static Wyong goal line defence in the 28th minute for the Warriors’ opening try.

Junior Pauga hooked the conversion into the southerly breeze and Wyong led 6-4.

The Warriors then took full advantage off a Johnny Tuivasa-Sheck error inside Wyong’s 20 mere zone five minutes later – from the ensuing scrum set Bell burrowed over from dummy half near the posts to give the Warriors the lead.  Pauga converted to put the visitors up 10-6.

The Warriors then scored the best try of the match on the stroke of half-time.

Five-eighth Sam Cook linked up with lock Isaiah Papalii on the right edge before the lock got a lovely pass away to half Zac Santo to burst into the clear and outpace the cover defence to score.

Pauga landed a super conversion into the teeth of the southerly breeze after the half-time siren to give the Warriors a well-earned 16-6 lead at the break.

Wyong – fired up by a blast from coach Rip Taylor at half-time – then launched their comeback to start the second half.

On their first attacking set inside the Warriors’ 20-metre zone in the second stanza, a clever Cornish short ball sent Roos second-rower Brock Gray over to score wide out. Cornish missed the conversion into the breeze, and the Warriors’ lead was narrowed to 16-10.

Wyong then forced further field position on the back of a penalty eight minutes into the second half for a tackle on Roos lock Nat Butcher that saw referee Adam Cassidy place Warriors forwards Papalii and King Vuniyayawa on report.

From the penalty set, Cornish turned an inside pass back to prop Eloni Vunakece who barged over through three defenders to score.  Cornish converted to level the scores at 16-all.

After Wyong got another penalty seven minutes later for a high shot by Warriors prop Charlie Gubb, the Roos worked a slick left side backline movement through the hands late in the tackle count for winger Chris Centrone to mark his comeback from injury with his 14th try for the season in the corner.

Cornish again missed the conversion into the stiff breeze, but the Roos were back in front 20-16.

The key play appeared to come with 10 minutes left when Nikorima sparked a left-side shift on the blind for Brock Gray to put in a deft centre kick for prop Lindsay Collins to follow through back up the middle to score untouched. Cornish converted to extend the Wyong lead to 26-16.

However, Centrone then made a meal of the restart to gift the Warriors possession from the ensuing scrum. A follow-up penalty saw Santo put up a cross field kick for centre Matt Allwood to leap above Centrone to score in the corner.

Pauga missed the touchline conversion, but the Warriors still were in the match at 26-20 down with five minutes left.

After receiving a couple of penalties for ruck infringements in the closing stages to set up field position – with the second penalty seeing Wyong bench prop Jake Lewis sin binned by Cassidy for a professional foul – the Warriors then played hot potato football before the ball found Cook as the final siren sounded.

The five-eighth then put in a superb cross-field kick for Pauga to gather and score in the right corner.

The centre then nailed the touch-line conversion to complete the thrilling draw – with a mouth-watering promise of a return bout at some stage in the upcoming finals series.

The Roos play their last round match as the newly-crowned minor premiers when they take on finals bound Newcastle at Morry Breen Oval next Saturday, while the Warriors tune up for the finals with their last-round match against bottom-placed Wests Tigers at Mt Smart Stadium next Sunday. 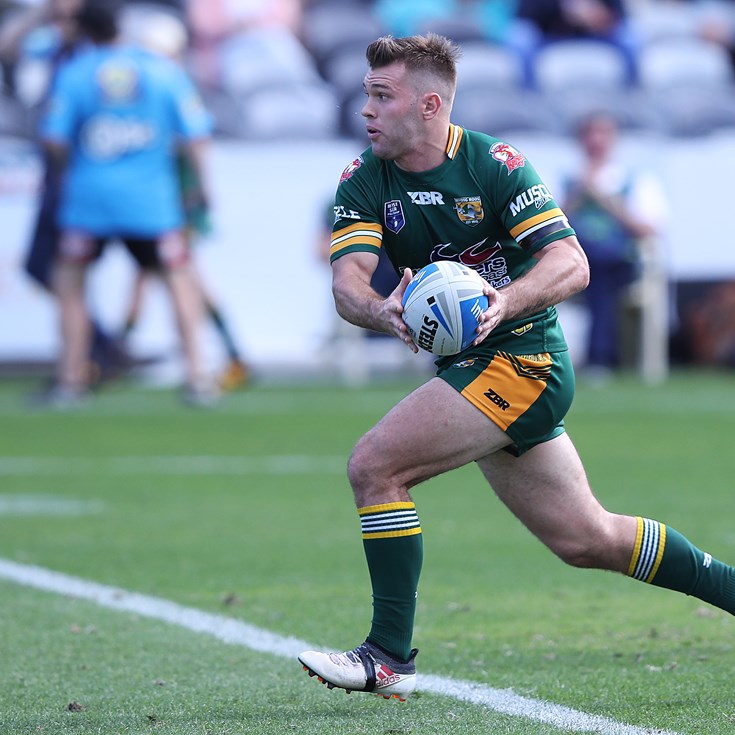