Sometimes Rugby League doesn’t quite go as planned and sometimes, at the end of a long, near-perfect season, players are left scratching their heads about what more they could have done. Unfortunately for the Wyong Roos, that’s the situation they’re faced with after a heartbreaking grand final loss.

It’s now been three years since the minor premiers took out the top prize – that was, ironically, the Penrith Panthers in 2014 – and for the second time in the same period the Roos have fallen at the final hurdle. Rip Taylor’s coaching record over several decades is unquestionable and the players’ efforts were impressive all year, but it didn’t equate to a premiership in 2017.

Still finishing the season with more wins than premiers Penrith, there are obviously many positives to take out of the season that was, and could have been. While senior men Mitch Williams and Eloni Vunakece were solid as usual and deserve a title, young guns such as Nat Butcher, Joey Manu, Johnny Tuivasa-Sheck, Luke Sharpe, Justin Toomey-White and Lindsay Collins showed plenty of promise, with many backing up after a Holden Cup Grand Final win over the Panthers last year. Given the strength of the overall Roosters squad, there’s no reason to think Wyong won’t be in the mix again next season.

Despite taking out the minor premiership, the Roos’ season wasn’t peppered with big wins and especially not over the top-four teams – their biggest victory came back in Round 1 when they destroyed the Wests Tigers 42-0 – but Wyong’s highlight was arguably their 16-12 preliminary final win over the Warriors.

Admittedly, coach Taylor is unlikely to agree; the Roos’ 43 missed tackles and 17 errors were both among their worst efforts all season. Instead we’ve nominated this game because the Roos did what was required to win when they had to. Apart from the decider, it was the only must-win game they were faced with in 2017 and an extended period of defence in the final 10 minutes proved why they deserved to make it to the big dance.

Manu crossed a double, both set up by Jayden Nikorima, who also scored himself off a superb individual effort to undoubtedly be the best on ground for Wyong. Four points was the biggest margin between the Roos and Warriors all season and it ensured a place in the big one the following week.

A high-quality side is unlikely to ever have one standout performer and the Roos’ were benefitted by several different stars throughout the season, but if one had to be nominated it would be fullback Luke Sharpe.

Still early in his career, Sharpe provided the energy, speed and support play at the back which frequently broke the game wide open for the Wyong side. With 84 tackle-breaks and more than 2,000 metres, he earned a place in the Intrust Super Premiership NSW Team of the Year.

Vunakece and Matt Ikuvalu also made the season’s best 17 while Taylor was named Coach of the Year, highlighting the dominance of Wyong throughout the season. Williams was consistent as usual at hooker, Collins, Butcher and Toomey-White were exceptional in the forwards and the halves pairing of Nikorima and Mitch Cornish was often unstoppable when they got on the field together. The squad will be one to contend with again if it can remain largely in tact next season.

Attack was never an issue for the Roos, but defensively they were not always at their best and ultimately paid the price for it. Wyong’s 437 regular-season points conceded actually put them fifth in the league and when the grand final came around, they came up against the side which was first by a long way.

You wouldn’t necessarily know it by looking at the scoreboard, but Wyong’s defence in the biggest games was poorer than usual; they made 47 tackles in both the preliminary and grand finals, which is a lot by any Intrust Super Premiership NSW team’s standards. They displayed the composure required to prevent points in the aforementioned Finals Week 3 clash, but the following week they couldn’t replicate it against the red-hot Panthers.

Fans and players will find it hard to remember 2017 for anything other than the grand final loss, but they should also recall the exceptional young talents unearthed and developed at Morry Breen Reserve this year. Whether the emerging stars play on at Wyong or find new homes elsewhere remains to be seen, but they heavily contributed to what must be considered a successful season for the Roos. 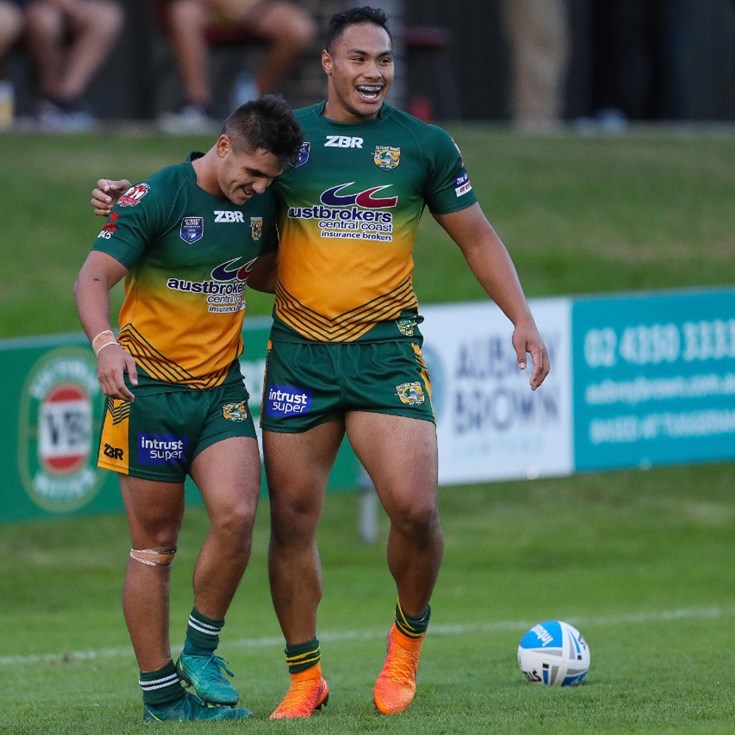