Freshly re-signed hooker Cameron McInnes has established himself as one of the Telstra Premiership's best defenders but is now aiming to bring a revamped attacking game to the St George Illawarra Dragons.

McInnes's 1155 tackles last season was easily an NRL-best – well clear of runner-up Jake Friend's 989 – while his stunning effective tackle rate of 95.1 per cent was bettered only by incoming teammate James Graham (95.6 per cent).

Because he feels he has adapted to such a huge defensive workload, McInnes told NRL.com his main focus now was to add some more spark out of dummy-half.

"It was a higher work rate than I've ever done before so it's only going to make me better for next year as well," McInnes said.

"For me now it's being able to combine that work rate with more spark out of dummy-half which is what I'm definitely going to be looking towards this season coming, being able to make my tackles and do my work rate but also being able to take my opportunities when they're there to take off or to kick or to do whatever the team needs."

NRL.com Stats show McInnes was one of the less effective dummy-half runners in the league with his average runs per game (2.9) and metres per game (23.7) well outside the NRL's top 10 rakes.

McInnes is also acutely aware that with Kangaroos utility Ben Hunt joining the club to partner skipper Gareth Widdop in the halves, there will be other quality ball-players demanding the Steeden.

"It's about taking those opportunities," he said.

"It's not the Cameron show, if it's better for someone else to get the ball I want to give it to them but when the opportunity is there for me I definitely want to take those opportunities so that will definitely be a focus."

Still, McInnes's four tries, six try assists and 27 tackle busts was a fair haul combined with his massive defensive contribution and there's no question it was a breakout season for the former South Sydney Rabbitohs under-20s skipper.

"I definitely had my best year to date but I'm looking to improve against next year and the pack that we have here, there's no excuse for me not to have a great year," he said.

"There's going to be plenty of quick play-the-balls and room to move so it's up to me to take advantage of that a bit better this year coming.

"[There were] a lot of different factors [behind the career-best year] but definitely my maturity and my approach to the game was a lot better coming to the Dragons.

"When I was at Souths as a young kid it's all I'd known and I put a lot of pressure on myself. I still put pressure on myself, as all players do, but I overthought it a bit and got out on the field and probably it was in my head too much.

"I wasn't playing instinctive footy whereas this year at the Dragons I was relaxed a lot more and decided to enjoy everything because it is a great opportunity that I have to be a footy player. It was really as simple as that. Mary (coach Paul McGregor) showed great faith in me and the club was really good in giving me an opportunity."

Such was McInnes's form his name has entered representative discussions. While Titans hooker Nathan Peats eventually got the nod for NSW, new Blues coach Brad Fittler has declared positions in his team are open for 2018.

"Definitely, I'll be putting my hand up but that will be through my performances and making sure I'm playing good footy for the Dragons every week. As a team if we're rolling and playing well, that success, your name gets tossed up more. " 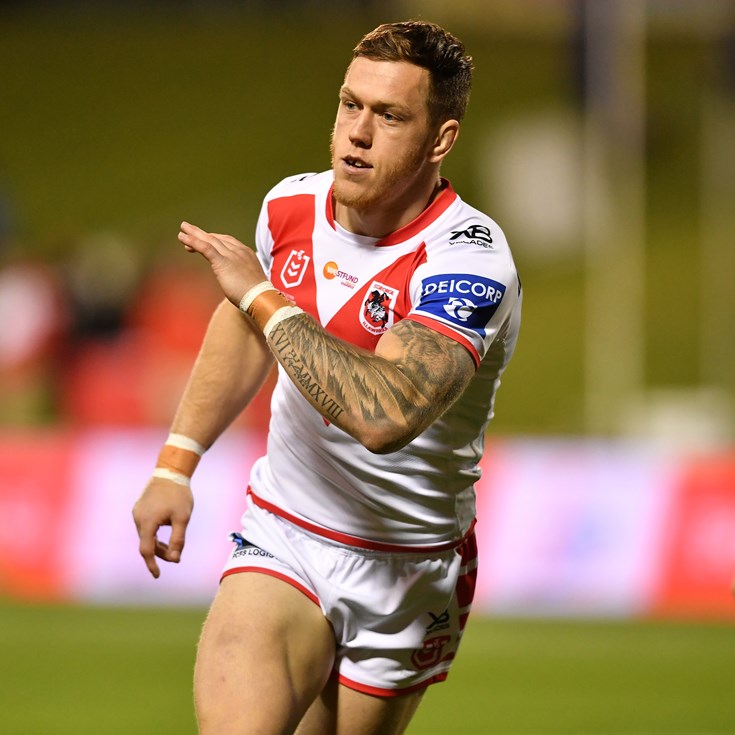 Heartbreaking end for McInnes at the Dragons

Sharks' catch for '22: McInnes locks in for four years

Why positional switch has McInnes in Origin frame