The sight of the Newtown Jets back on free-to-air television was a pleasing one on Saturday afternoon, when the proud foundation club took on the Penrith Panthers at Panthers Stadium.

It had been 35 years since the Jets’ last regular-season appearance on free-to-air, not including two grand finals played in the past decade and broadcast on Nine’s Wide World of Sports. The team’s Channel 9 return was given the appropriate welcome, with Paul Gallen, Joel Caine and Dragons Intrust Super Premiership coach Mat Head taking up spots on the expert commentary team. Newtown marked the occasion with a 36-12 win over Penrith.

Channel 9’s coverage doesn’t stop there, with one match to continue to be broadcast in NSW each Saturday at 1pm. Head will also provide insight where possible during the season, with another commentary slot scheduled later in the year. Click here for the full competition draw.

Round 4 marked the perfect opportunity for NRL coaches and players to get a good look at the lower grade, with four out of the five matches played as curtain-raisers to top-grade fixtures. The Intrust Super Premiership matches at Allianz Stadium, Lottoland, WIN Stadium and ANZ Stadium all drew impressive crowds from the public and NRL squads alike, while the Jets’ game at Penrith had both Cronulla Sharks coach Shane Flanagan and Panthers General Manager Phil Gould in attendance.

The Flanagans were one of two famous father-son combinations in the Intrust Super Premiership NSW fixture at the foot of the mountains, with Liam Coleman, the son of the former heart and soul of South Sydney, Craig Coleman, also donning the No.7 jersey for Penrith!

Wyong Put on Another Nailbiter

In a remarkable run of close finishes, the Wyong Roos have now had three of their four matches decided by a single point after their match against the Warriors at Allianz Stadium. This time, of course, they would be on the wrong side of the result, their trans-Tasman combatants winning 23-22 thanks to a Chanel Harris-Tavita field goal.

The close finishes could be giving heart problems to the Wyong faithful, but if recent history is anything to go by, the trend could continue next weekend. The Roos will play the Bulldogs, with whom they have been level after 80 minutes in three of their past four encounters.

The selection of experienced half Blake Austin for Mounties in Round 4 was a major one ahead of the game at Lottoland, and appears to have affected the result; Mounties defeated the Blacktown Workers Sea Eagles 26-6 in what was their opponents’ first loss of the season.

In actual fact, Austin simply played his role in a good team effort for Mounties. Having run 130 metres, the halfback scored a late try as Mounties extended their lead. Meanwhile, recruit Sitiveni Moceidreke continues to impress at his new club, scoring two tries and kicking five goals in a solid performance.

Following the St George Illawarra Dragons’ fine victory over the Newcastle Knights at WIN Stadium, there was one name on everyone’s lips: Jai Field. The young Dragons fullback took little time to make his mark on the game, scoring a long-range try early before directly setting up three more. With a line-break-assist which led to the final four-pointer – one which could also have been scored by Field himself as he loomed up in support – Field capped the game with involvements in all five of the Dragons’ tries.

In a good problem for Dragons fans, the Intrust Super Premiership game was followed up by another strong one from Matt Dufty, the man taking Field’s possible position at NRL level. Field has performed for the Dragons at both five-eighth and centre in the past, meaning head coach Paul McGregor has a versatile option for the top grade should he require it.

Yep, Jai Field was in everything for the @NRL_Dragons!

While Malakai Watene-Zelezniak and Corey Thompson are seen as Ivan Cleary’s preferred options at NRL level, he is not short of NRL-quality wingers – evidenced by the Western Suburbs Magpies’ big win over Wentworthville on Easter Monday.

David Nofoaluma and Mahe Fonua, with 89 and 50 NRL appearances respectively, lined up for the Magpies again in Round 4 and were unsurprisingly impressive. Both scored two tries each, and both ran more than 200 metres – two of just three players to achieve that feat on the weekend, alongside Field.

In the metres-run category, in fact, Fonua is a clear winner for season 2018 so far. Having exceeded 200 metres on three occasions – and having topped the competition twice – Fonua now sits on 804 metres for the year. The tally is easily the highest in the competition and far greater than Caleb Aekins’ 687 metres, with Fonua also making the most runs (75). Stats leaders in all categories can be viewed at NSWRL.com.au/Stats. 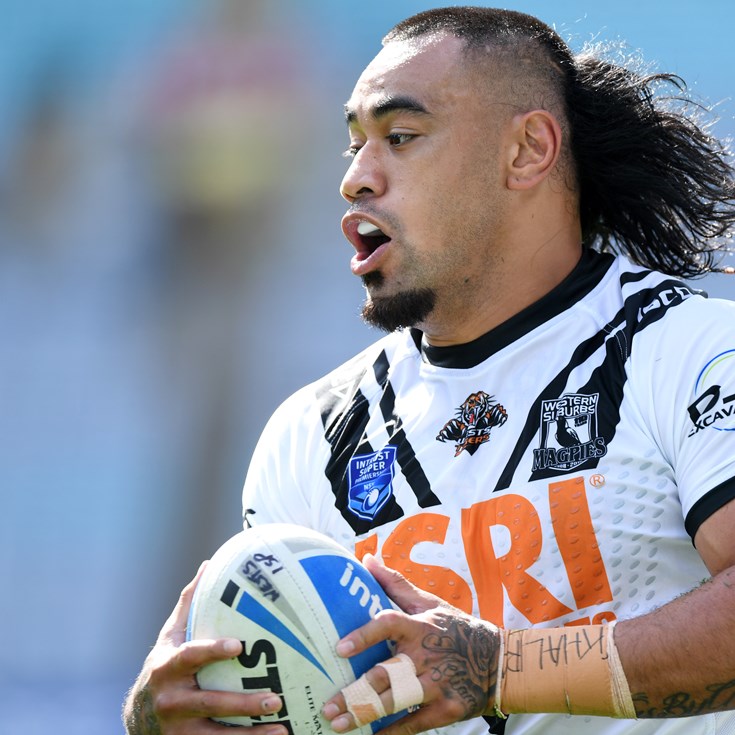 Fonua Ready To Repay The Faith